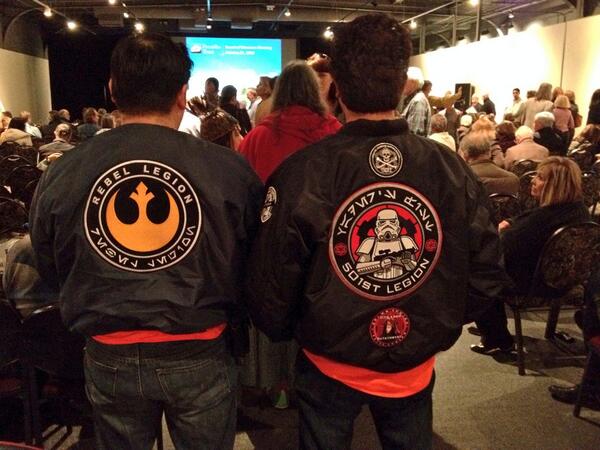 The fate of development Crissy Field is still up in the air after a townhall meeting last night [Mon/27] at the Presidio, where nearly 150 community leaders and residents spoke out on three rival museum proposals, in addition to a large group that supports no proposal at all.

“I don’t think any of them are taking history into consideration,” said SF resident Mike Brassington. “It’s a national historic landmark, and to my knowledge none of the groups care about the history.”

The three groups in question are vying for the highly coveted spot on mid-Crissy Field now occupied by Sports Basement, and each has submitted a proposal to the Presidio Trust laying out its development plans. The first is a project from Star Wars creator George Lucas, who hopes to open an interactive museum dedicated to illustration, digital art, and animation. The proposed facility, which would be funded from Lucas’ personal finances, has already been endorsed by influential leaders such as Rep. Nancy Pelosi, Gov. Jerry Brown, and SF Mayor Ed Lee.

“Arts education is critical to our students, and the whole city of San Francisco is their classroom,” said SF Board of Education Vice President Hydra Mendoza on behalf of the Mayor’s Office, speaking to the Presidio Trustees during the meeting. “The Lucas Cultural Arts Museum will create a rich new environment for our students.”

The Golden Gate National Park Conservatory (GGNPC) is the official sponsor for the second proposal, the Presidio Exchange, which is more commonly referred to as the PX. The PX — which is endorsed and funded by powerful groups such as National Geographic, the California Academy of Science, and the Aspen Institute — would be a conservatory and cultural center for both locals and tourists. The PX building, at 55,000 square feet, is the smallest facility and just over half the size of the other two.

“All of our partners can bring a lot of content to the Presidio,” said David Shaw, member of the GGNPC. “This is the most important issue of our time: the intersection of human culture and the natural world.”

The third and final proposal, known simply as The Bridge, is seen as the least competitive due to its lack of funding. Indeed, a spokesperson for The Bridge admitted to the Trustees that while the project had “no firm or solid” financial resources, they “do have the right idea.” While their efforts are noble, the “right idea” isn’t likely to earn a vote of confidence when millions of dollars are on the line.

Using the couple hundred members in the audience as a gauge, the PX project seemed to be the most popular, receiving the most robust applause out of the proposals. During the public comment portion, when any community member can hold the floor for up to two minutes, many people asked the Trustees to hold off on a decision. Virtually everyone who suggested a postponed decision also made clear that the PX was the least of the three evils, and if something had to be built, it should be the Presidio Exchange.

Charlotte Hennessy, who is on the board for the Presidio Historical Association and carries a sign that reads, “May the farce be with you,” agrees that the best solution is to put Crissy Field back as it used to be before all of the over-development. Just as a police officer arrives to escort Hennessy off of the premises toward the “First Amendment area” for carrying a sign, she shares her ideal vision for the future of the Presidio.

The Presidio Trustees gave no timeframe for making a decision.