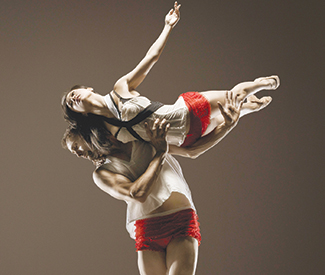 DANCE Now in its 19th season, Robert Moses’ Kin offered up a three-part program, “RISE,” this past weekend at Yerba Buena Center for the Arts. “RISE” contained two world premieres — Profligate Iniquities and The Slow Rise of a Rigid Man — and a reprise of last year’s ambitious NEVABAWARLDAPECE. It was an evening in which Moses’ 14-member ensemble showcased its individualities, and presented rich perspectives on two very different pieces of choreography. The dancers would have been even more appreciated if they could have been seen better. For some reason, David K. H. Elliott’s lighting design favored darkness; at times, it was so murky that it wasn’t easy to see who did what, where.

For Profligate, Moses chose a selection of glorious Sephardic music that evoked the cultural complexity of southern Spain before the expulsion of the Jews in 1492. Tiffany Snow’s brightly lit sukkah, the temporary and fragile dwelling associated with the High Holy Days, suggested a place of respite.

The duets that made up the majority of Profligate explored a wide range of relationships, yet all of them seemed to have a touch of anger and distrust to them. There was weariness in the way Katherine Wells and Brendan Barthel circled each other, with Wells bursting into limb-shaking explosions. Yet they finished by going off together into the darkness. Standing tall and self-assured, Crystaldawn Bell barely glanced at Victor Talledos, who crawled and slithered in her direction like something emerging from below the earth. They shared a couple of promising dominance encounters, but then she sent him off.

Norma Fong, fiery and fierce, and Dexandro Montalvo, the man with the loosest hips, went at each other like two different forces. When he swung her, she defiantly stared at us.

Individually, the duets were strongly delineated, beautifully showing off these fine dancers — including major solos by Carly Johnson in her second year with the company, and Jackie Goneconti in her first. But Profligate was too episodic. It dragged. It needed some thread, some trajectory to tie the individual parts together.

The evening’s second premiere was Artistic Director Moses in the modest but well-focused The Slow Rise of A Rigid Man, a solo he created for himself. The work is part of a project about family, Blood in Time, which Moses began in 2000.

Dressed in a flowing coat and wide pants, the dancer looked heavier than he is in real life. Walking calmly into the spotlight, Moses started a movement conversation with David Worm (heard on tape), a founding member of the SoVoSo singing group. His rich baritone roamed in a free-flowing but wide-ranging manner through the topic of emptiness, perhaps aging. Moses started with simple warm-up movements in place, repeatedly wishing his knee into action. As he began to spread into space, you could still see young Moses with ODC/Dance in the fluidity of his gestures. But every step, every turn has been distilled, not from memories but from a recognition of the now. At one point, he reached both arms high, perhaps to embrace Worm. Though modest in language, Slow resonated.

I had feared that without the live music and text that was such a major part of last year’s NEVABAWARLDAPECE (“never will be there a world of peace”), its reprise would lose power. In dance terms, it was made richer through the simple addition of four dancers — the unisons, for instance, whether simply sitting on the sidelines, working their way in line formations across the stage, or observing the action from the wings. However, the 45-minute work did not come more into focus.

The major issue seemed to be Carl Hancock Rux’s overwhelming text that ranges from ancient to contemporary injustices. His words thundered across the stage like some invisible doomsayer’s. Since we are more wired to absorb information aurally than visually that can’t be helped, but it put a big burden on the dance.

Often the stage looked like an arena for struggle. Jeremy Bannon-Neches gesturing and leaping as if attacked, Wells whipping through turns as if pursued, and Montalvo drawing on his hip-hop roots to tear into the fray. Even the gorgeously long-limbed Bell seemed besieged when simply standing still. In their solos, Goneconti and Johnson seemed as unstoppable as the passage of time. At one point two dancers appeared to be nailed to a wall, quite arbitrarily. And yet among these incidences, there were welcome moments of quiet, passages of waiting, and a double circle folk dance when everybody seemed to be on the same page.

The last image was of Montalvo vigorously gyrating his hips with some overhead comment about being creative, because that’s all we have. A noble thought, perhaps, but not enough to pull this ambitious project into focus. *