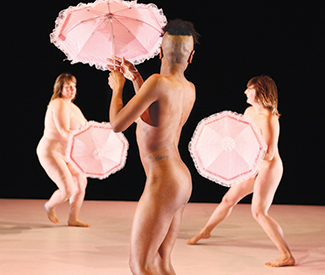 THEATER It takes a playwright of particular boldness to forgo text entirely in deference to movement and music. But in addition to the formal choices made in her Untitled Feminist Show, eminent New York downtown theater maker Young Jean Lee also pursues a theme (flagged by her “un-title”) that stubbornly remains as controversial as ever: the politics and pleasures of female empowerment. This theme plays out starkly, without clothes and without shame, over the course of an hour-long romp that will make its Bay Area premiere this weekend at Yerba Buena Center for the Arts.

Conceived and directed by Lee, with choreography by Faye Driscoll (another prominent New York artist whose You’re Me ran at CounterPULSE last March), Untitled Feminist Show is just one of the latest of Lee’s willfully provocative, consistently witty pieces. She and her Young Jean Lee’s Theater Company have made a national reputation by reaching for the most uncomfortable subjects, producing a set of humorous, audacious, experimental plays about race, sex, family, religion — great taboo regions normally shrouded in prickly mythology, limited by official debate, or otherwise smothered by good intentions.

Her works include Straight White Men, an exploration of success in contemporary American society; The Shipment, her “black-identity politics show”; Church, investigating American-brand Christianity through the structure of a church service; and the fierce, zany, and dis-Orienting Songs of the Dragons Flying to Heaven (produced locally by Crowded Fire in 2011) in which, drawing on her own Korean American roots, the fractured perspectives and sacrosanct traditions of an American minority serve a master narrative about a young white couple’s banal relationship.

YBCA’s presentation of Untitled Feminist Show comes, not coincidentally, as the organization transitions under its new leadership. Deborah Cullinan, who succeeded Ken Foster as YBCA’s executive director in September, was the longtime executive director of Intersection for the Arts. She has a well-deserved reputation for turning that esteemed arts organization around from hard times after she took over in 1996. YBCA’s director of performing arts, Marc Bamuthi Joseph, was a successful Oakland-based artist and activist when he took over from Angela Mattox (now running PICA in Portland) in 2012.

As longtime associates in the local arts scene, both of whom have been exceptionally community-oriented advocates for the arts, Cullinan and Joseph together promise a bold redrawing of the lines at YBCA. They recently sat down to speak with me about the vision they share for a 21st century arts organization — including the development of something they call the creative ecosystem — and where the work of an artist like Young Jean Lee fits into it.

SF Bay Guardian How are you settling in, after a couple of months and a couple of years now, respectively? And what are these creative ecosystems?

Deborah Cullinan Where I’m at: I’m still listening, learning—frankly a little astonished. I was, what, three blocks away? And my predecessor Ken Foster was one of my closest work friends; Bamuthi another one. I had no idea how much goes on here. It’s just abundant. The creative ecosystem is something Marc dreamed up, and certainly wooed me with. It’s something the two of us, and everybody here, considers to be a way we can think about a contemporary arts center in this century.

Marc Bamuthi Joseph The day that this feature runs will be my second anniversary. My last work [red, black & GREEN: a blues] was commissioned here, and premiered here. I interviewed for this position three days after the premiere. That last work was built around an integrated, documentary process of asking public intellectuals, doers, activists of all stripes—and by activists I don’t mean by vocation but in the purest sense of the word—to contemplate a question and create a physical response. The result, in terms of making art but also in terms of my personal relationships (the way that community might interact with an artistic process), was something that I essentially adapted and created here.

Our community engagement program is a curatorial department. It doesn’t function as a traditional department in that it’s not supplementary. They are agitators; they are intentional. They make space, as opposed to supplementing work. Their gig is not to cue up the Q&A after a play. [It’s] ultimately about the cultivation of relationships.

So that’s what the creative ecosystem is. It’s an adjunct to my own artistic process; it’s a scheme and structure that works within the infrastructure that we have at Yerba Buena Center. What we do is we curate small groups, somewhere between 30 and 50, around key questions that artists are driving. We bring these folks together in salon spaces to watch work together. So, for Young Jean Lee, the questions are: “What is on the other side of your body’s joy?” and “What is on the other side of your body’s shame?” The group has been together for about a year. And when we present the work, they’ll create in our theater lobby physical responses — performative, immersive, antagonistic, and also very vulnerable responses to those questions of joy and shame in the body.

Having piloted a group already (which was contemplating futurity and soul), and now working with body politics, we’re going to add a layer of the onion every year, so that in the coming years we’ll have hundreds if not thousands of folks operating on our campus not just as audience members but as agents within artistic inquiry, so that while we’re here it’s a place of thinking and doing and not just watching.

SFBG Who makes up this group?

MBJ They come from all over the educational spectrum, and all over the vocational spectrum. That too is by design. We wanted at least 10 different practices in each of these groups. These groups aren’t made up of artists exclusively, and ideally artists are in the minority. What we’re creating is a platform by which an arts space might be a hub for diverse intellectual activity. It’s art-framed, but it’s not necessarily art-centered.

DC I’m excited to see us pursue not an either/or definition of what an arts center is — or what art is — but a both/and. What we’re trying to suggest here is that the more we consider what the art is doing, who’s gathering around it or who’s making it, the more valuable that art itself is. The community engagement structure Marc talked about suggests that if you don’t have an active curatorial arm asking, “Who’s not here still?” and “What don’t we know yet?” then the curatorial structure is static. I think putting things together in this way means it’s much more of a circle, and it’s much more inclusive.

MBJ There’s an arc around relationship to the body—in a way that’s not so much about identity; I think it’s more about empathy and vulnerability. These broad themes of joy and shame are more visceral than intellectual. The alchemy of transformation, the movement of molecules in a room, that’s currency to me. An artistic experience is more valuable if I feel my chemistry changing. So I look for art and artists that demonstrate a similar value system. Myra Melford’s work; Dohee Lee’s work; all of the artists in our New Frequencies music festival — these are artists who demonstrate that same sensibility: the attack of inquiry with brilliant intellectual design, but also a fierceness and unflinching-ness around personal transformation.

The work I subscribe to is work where I feel an artist being transformed, with a magic or sorcery around the ability to have personal transformation be a conduit for collective transformation. I think that’s at work [in Untitled Feminist Show]. And in terms of an intentional community design, this is what we foreground. *