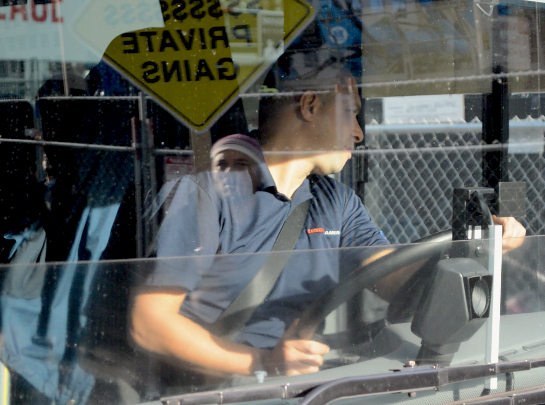 Two tech buses were surrounded and blockaded by over 100 protesters earlier today, just hours before the San Francisco Municipal Transportation Agency Board of Directors is set to vote on fees for private shuttle use of public bus stops.

The protest was organized by Heart of the City, an alliance of many long time housing advocacy groups. The marchers met at UN Plaza at at 8:30am, then proceeded to Market and 8th, where they stopped the two buses that many identified as Facebook and Google buses, based on their destination signs.

“The corporation that is employing this bus is responsible for the displacement of San Francisco tenants,” said Erin McElroy, the head of the Anti-Eviction Mapping Project, to the crowd. “And we’re not going to stand for that for that one more minute.”

Techies on their buses worked on their laptops as the protesters swarmed around them. One tech worker even took a quick break to taunt activist and protester Tony Robles (as Robles waves a sign) from the window of his bus. It’s in the video below.

The SFMTA’s today will vote on a pilot program that would charge private shuttles $1 per stop, per day for use of public bus stops, which are used by Muni. Mayor Ed Lee, SFMTA head Ed Reiskin and others have claimed that this falls in line with Proposition 218, which limits fees and taxes that municipalities can levy without going to the voters.

But that’s is murky rationale for a number of reasons, as the SFMTA said that enforcement would be carried out by off-duty (overtime drawing) enforcement officers, and the idea of those officers overtime fees being fully paid by the $100,000 a year contributions of tech companies is questionable.

Equally questionable, the protesters said, is the idea that Google, Facebook, Genentech, Yahoo, and others would only pay about $100,000 a year for their private shuttles to use bus stops created for and maintained by a taxpayer-funded public transit system.

Though the mayor and Google have reiterated the talking point that the shuttles take cars off the road, they also delay the already slowdown-plagued Muni system and push pedestrians onto dangerous streets as Muni jockeys for space with the private shuttles.

By 9:30, the SFPD arrived on the scene of the protest and blocked off the entrance to 8th street from Market. Shortly after, the protesters dispersed and continued marching to a Realtor’s office, and finally City Hall. There were nearly 30 reporters at the bus blockade, but by the time the protesters reached City Hall, there were only a handful left.