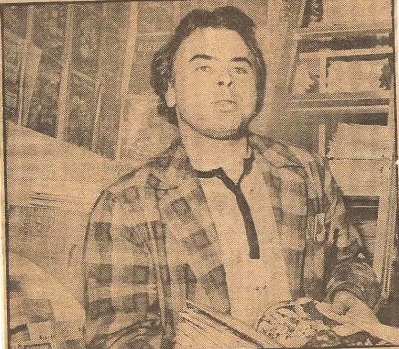 UPDATE: This just in from Ron Turner: “Hello Friends.  There will be a memorial for Gary this coming Tuesday at 11 AM at 225 Berry St. off 4th, very near the Giants ballpark and the Cal Train station.  Hope to see you there.  It is a modern Senior Center where Gary made his home. Bring stories and memories to share.”

Just got word from Last Gasp Press founder Ron Turner that comics legend Gary Edson Arlington has passed away at age 75. In 1968, he opened what is considered the first comic book store in the United States, San Francisco Comic Book Company, which galvanized the hotbed Bay Area underground comix scene (and helped house his enormous collection, too).

As Art Spiegelman told the Chronicle in 2012, on the occasion of the publication of “I Am Not of this Planet,” a book of Arlington’s colorful artwork published by Last Gasp:

He was truly a fascinating character who supported local comics and art until the end, and influenced pop culture exponentially.

“Gary died last night in San Francisco.  He had been living on his own in a nice subsidized  apartment near the ball park.  He had a motorized wheel chair and was out and about in SF.  He had heart and circulatory problems that led to several hospital stays during the last decade.  The comic community will remember Gary as founding the first comic book store in America, on 23rd st. in the Mission. I bought my first underground comic there in 1968.  It was a hangout for all the early underground comic artists and fans.  Services have not been announced as yet.”

We’ll update this post when we find out about services. Meanwhile, go out to your nearest comics bookstore and buy a bunch of indies in his honor!

One of Gary’s celebrated comics anthologies from 1983: