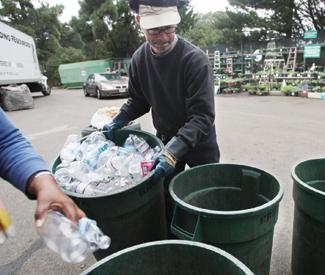 An eviction crisis of a different sort has hit San Francisco, as one by one, recycling centers are closing across the city. Supervisor Eric Mar today called for a hearing on recycling center closures, to measure the impact on the city’s poor and its zero waste policies.

“I’ve heard from many of our residents that (the closures) will have severe impact on the low and no income members of our community,” Mar said at today’s Board of Supervisors meeting. “Many are immigrants who rely on this stream of income.”

The hearing was spurred by the announcement of the upcoming closure of a recycling center at the Market and Church street Safeway. But the problem is deeper than just one facility.

Since the closure of the Haight Ashbury Neighborhood Council’s recycling center by Kezar stadium, four other recycling facilities in the northern half of San Francisco have closed or announced their closure. A sea of NIMBY neighbors are making war not on poverty, but the impoverished, as gentrifying neighborhoods chafe against rubbing shoulders with the downtrodden and homeless who trade in cans and bottles to make a meager living (many of whom we’ve profiled before).

“Pretty much all impoverished people recycle (at these centers),” she told the Guardian. “It’s a class delineator. You don’t recycle? You must be rich.”

And it’s those monied few, like that Haight Ashbury Improvement Association (who pushed out the HANC recycling center) who cry out against their existence.

San Francisco Chronicle columnist C. W. Nevius likes to poke at the poor by playing up the arguments of the “improvement associations” and other neighborhood groups that are calling for the recycling centers’ ouster. In his latest piece just last Saturday, Nevius lambasted the ills of the recycling “criminal enterprise.”

From his article: “What the closure will do is make it more difficult for the large-scale scavengers, who have turned theft of recyclables into a criminal enterprise. They cruise the streets at night and loot the curbside recycling bins. Some even pay homeless individuals a small sum to raid the bins and collect bottles and cans for them.”

Thanks @cwnevius , good to know the poor and suffering are now officially a “public nuisance.” #SanFrancisco pic.twitter.com/uR3laNetuZ

It’s an open secret in San Francisco that many recycling scavengers in the city raid blue bins meant for Recology in search of cans and bottles. But the idea of the closure of the Market street Safeway recycling center spelling an end to their black market presence is perhaps a bit extreme.

“Actually the close of these recycling centers has shown a dramatic increase in secondary recyclers,” Friedenbach said. “These people don’t have a place to recycle, and are forced to sell them at a cut rate to people in trucks.”

Those trucks driving around with ill-gotten hauls of recycling? They may increase without the presence of all those recycling centers — because they’re competitors. In addition, closing the the centers outright may not even now be as necessary as new regulations from the state, via CalRecycle, limit the amount of recyclables processing centers can take at any one time.

“January 1 there was a reduction in the daily load limit,” Marc Oldfield, communications director at CalRecycle told us. The previous limit of 500 pounds of aluminum or plastic was reduced to 100 pounds, closer to the average CalRecycle found most customers brought in. Oldfield was cagey about how his phrasing, but implied the new limits were meant to curtail the recycling black market.

“That could potentially affect the ‘business material’ coming in,” he said.

Closing recycling centers has deleterious effects on businesses as well: when they close, state law mandates that local shops pick up the slack. Mom and pop liquor stores, grocery stores, and most shops that sell cans and bottles would be required to buy-back cans and bottles (like a recycling center) or pay a $100 a day fee. That’s upwards of $35,000 a year.

The small business commission was so worried about the impact on independent store owners that they started an outreach program to educate them on their options just last year, which we’ve covered before.

But you know, at least people in the neighborhood won’t have to be subjected to poor people. That’s what matters, right?