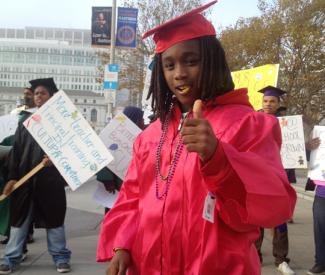 Students who run afoul of the police may gain new protections under an agreement between the San Francisco Police Department and San Francisco Unified School District up for vote at tomorrow’s Board of Education meeting.

The new agreement explicitly calls for parents to be notified when their children are taken into the custody of police, or are questioned as a victim or a witness. The agreement also introduces graduated steps that increase the burden on school administrators and the police to exhaust all other options before arresting a student.

“What we’re outlining in this policy is that the school system has the first responsibility to ensure discipline and safety, but we don’t want to overreact or push students toward the criminal justice system unless it’s absolutely necessary,” Board of Education Commissioner Matt Haney told the Guardian.

Under the current rules, police officers have been known to discipline kindergartners in San Francisco public schools at the behest of school administrators.

The Guardian touched on this issue briefly in our coverage of suspension reform (“Suspending Judgement,” Vol. 48, Issue 10, Dec. 4):

“He was five years old, and as kindergartners sometimes do, he threw a temper tantrum. In the school’s desperation to contain him, officials called the SFPD.

‘The police only came one time,’ Desamuel, now seven, told the Guardian. Sitting in his San Francisco home with his uncle Lionel, Desamuel sounded ashamed. ‘But I didn’t go to jail because they only put kids in jail for being bad, like kids taking guns to school.’

(Desamuel’s uncle and guardian) Lionel struggled with the school’s administration, and asked them to try less punitive ways of handling his nephew. ‘I told them to just hug the boy. Their response was ‘it’s hard to hug someone swinging at you.’”

But it wasn’t just that the police were called in to handle his five year old nephew that set off Desamuel’s uncle and guardian, Lionel Hill. It was that they were brought in without his knowledge.

Before the police can bring students into the juvenile justice system, the new rules would allow them a series of graduated offenses. A first offense would bring an official warning notice, a second offense allows the officer to recommend the student into a diversion program, and only on the third offense can an officer bring that student to juvenile probation.

Since 2009, over 50 students aged 12 or younger have been arrested at school, according to SFPD data compiled by Huckleberry Youth Services.

United Educators of San Francisco President Dennis Kelley praised the potential for better communication among all involved. “You don’t want things going on with kids that are isolated from the parents,” he told us. “I think having coordination between the board, parents, and police is a positive step.”

Coleman Advocates, an education and social justice group in San Francisco, was a driving force behind the new changes.

“We’re putting the responsibility for student behavior back where it belongs, with educators, students, and parents, not with police,” said Karn Saetang, director of Student Organizing at Coleman Advocates. “When police get involved in school discipline, it sends all the wrong messages to students and makes it more likely they will fall behind, fail to graduate, or get involved in the juvenile justice system.”

These changes come on the heels of new disciplinary reforms tasking the SFUSD with implementing new “restorative practice” interventions in lieu of suspensions, ending zero tolerance discipline that is falling out of favor nationally, according to a recent editorial by the New York Times.

It looks like better days are ahead for students in the SFUSD.