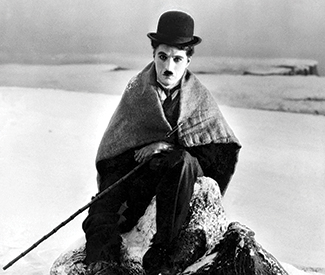 FILM Was ever an actor so closely associated with his signature character than Charlie Chaplin and his Little Tramp? (The best second-place I could come up with: Paul Reubens, aka Pee-wee Herman.) The San Francisco Silent Film Festival honors the 100th anniversary of Chaplin’s creation with “The Little Tramp at 100: A Charlie Chaplin Centennial Celebration.” Naturally, the 11-minute Kid Auto Races at Venice, which introduced the character to audiences Feb. 7, 1914, is on the bill. (For sticklers: Mabel’s Strange Predicament, the actual debut of the Tramp, was filmed prior to Venice, but released a few days later.)

In Chaplin’s 1964 autobiography, he wrote about assembling the character in the wardrobe room. “I wanted everything to be a contradiction: the pants baggy, the coat tight, the hat small, and the shoes large. I was undecided whether to look old or young, but remembering [producer Mack] Sennett had expected me to be a much older man [Chaplin was around 25 at the time of filming], I added a small mustache, which I reasoned, would add age without hiding my expression. I had no idea of the character. But the moment I was dressed, the clothes and the makeup made me feel the person he was. By the time I walked on stage he was fully born.”

You know the rest: Moviegoers couldn’t get enough, and — apologies to Team Buster Keaton — the Tramp became the silent era’s most popular figure, and remains its most iconic symbol. This tribute screens Venice with 1921’s The Kid, which begins as a destitute young mother (Chaplin’s frequent co-star and sometimes girlfriend Edna Purviance) tearfully places her newborn in the back seat of a fancy car with a note: “Please love and care for this orphan child.” Her desperate scheme is foiled when the auto is stolen by a pair of heavies; fortunately, the baby is soon scooped up by the Tramp, whose initial reluctance to play Daddy melts away with reassuring speed.

The action jumps ahead five years, with Jackie Coogan — one of the first child stars, and the reason there’s a California law protecting the earnings of underage performers from their greedy guardians — playing the ovary-rattlingly adorable title character. He and his adoptive father may live in squalor, and earn their dough a few shades on the wrong side of the law, but they make a surprisingly tight family unit, sharing comically huge stacks of pancakes, battling the local bullies, etc. Meanwhile, the tyke’s mother has become wealthy, and there’s a happy ending in store — but not before a rooftop chase, a trippy dream sequence, and deliverance on the film’s opening promise to supply “a picture with a smile, and perhaps a tear.” This screening features accompaniment by the San Francisco Chamber Orchestra (with Timothy Brock conducting Chaplin’s score), plus a Chaplin look-alike contest before the show — so get that mustache correct!

The Kid was Chaplin’s first full-length after nearly a decade of shorts, a trio of which are grouped together in a program dubbed “Our Mutual Friend.” The title references the Mutual Film Corporation, which signed Chaplin to a $670,000-per-year contract in 1916. (Not too shabby a figure today, it was a mind-blowing amount at the time.) He immediately got to work justifying his huge salary, cranking out hit after hit. These three share similar casts, with Purviance playing “the girl” and favorite Chaplin foil Eric Campbell (who stood a foot taller, and from some angles a foot wider, than the diminutive Chaplin) playing “the baddie.”

The Vagabond (1916) is the most melodramatic of the bunch; it follows a violin-playing hobo who encounters a waif being held captive by what the glossary of unfortunate movie stereotypes would call “gypsies.” (Campbell plays a whip-cracking patriarch.) The Tramp rescues her, but not before a passing artist paints her portrait and helps her reunite with her (rich) family — like The Kid, The Vagabond contains themes of economic disparity, a favorite Chaplin topic. Far more lighthearted are Easy Street (1917), in which the Tramp finds religion (thanks to an angelic church worker) and a backbone, after becoming a cop and defeating the local heavy (Campbell, adorned with spectacularly “evil” eyebrows); and The Cure (1917), in which an wobbly “inebriate” checks into a health spa, toting a huge suitcase full of booze. His fellow patients include a comely lass and an angry, towering brute.

The simple stories of all three shorts are elevated by flamboyant comedy set pieces, so effortless-seeming they mask what had to have been elaborate preparations and choreography. Any time there’s a bucket of water, or a hole in the ground, Chaplin is bound to fall in eventually — but there’s great delight in watching him teeter around and prolong disaster as long as possible. He also never met a revolving door he could pass through just once. And there’s never a stretch without some little moment of subtle hilarity, to counteract all the broad slapstick: Watch as Chaplin pretends to share his hymnal with an infant in Easy Street, then shrugs when he’s ignored. (That film also contains one of the oddest moments in Chaplin’s filmography, when the tramp accidentally sits on a heroin addict’s needle and leaps up, infused with drug-fueled super strength — pre-Production Code sordid humor at its finest.) All three films feature accompaniment by Jon Mirsalis on piano.

The final program is 1925’s The Gold Rush — like The Kid, an essential feature that no Chaplin fan minds revisiting, and an ideal vehicle for newbies to make his acquaintance. As a prospector seeking his fortune in the frozen Yukon, the Tramp fights a hungry bully and falls in love with a pretty girl (of course), but he also performs the oft-imitated tableside “roll dance” — and gnaws on his own boot. Priceless. And since lively music is a huge part of the experience: Timothy Brock once again conducts the San Francisco Chamber Orchestra, playing Chaplin’s own score. *

“THE LITTLE TRAMP AT 100: A CHAPLIN CENTENNIAL CELEBRATION”