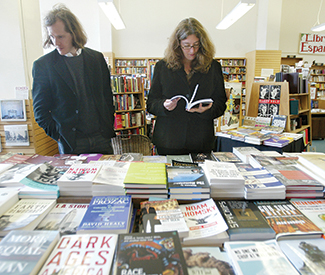 After more than 40 years in San Francisco, the progressive independent bookstore Modern Times may have to close its doors in the near future, but not before issuing one final appeal for help from the community.

In the 1990s, Modern Times managed to survive chain retailers’ predatory business strategies and cheap prices. More recently, it was able to withstand changes in the industry due to the increasing popularity of e-books and online retailers. More than half of the independent bookstores in the country shut down between 1990 and 2011.

This time, the threat is local: the gentrification and eviction crises that are on so many San Franciscans’ minds these days.

“Our rents on Valencia Street, where we were for 20-some years, kept going up,” explains Ruth Mahaney, the senior member of the collective that runs Modern Times. “When our most recent lease was up in 2011, the landlord wanted to raise it by over $1,000 a month, probably $2,000.”

The bookstore had already been functioning at a loss for years because of its continually rising rent and other factors. There was no way it could afford such a massive rent increase, so Mahaney and her associates moved deeper into the Mission to their current location on 24th and Alabama streets.

“It’s been lovely,” Mahaney says of the new location. “People in the neighborhood have been really welcoming. We have much better rent and a great landlord. We’re getting new customers and younger people. So we’re really happy there.”

Unfortunately, the bookstore has continued to function at a loss, albeit a much smaller one.

“Since we’ve moved, I think a lot of people haven’t found us again, so we’re not as much a center of activity as we used to be,” Mahaney speculates. “I think a lot of our old customers thought we closed.”

Modern Times first moved to the Mission District in 1980, nine years after the bookstore opened as an all-volunteer collective project responding to “the hopes and passions” of the ’60s. In the ’70s, it was a resource for political activists striving to make progressive changes for social justice in the US. But by the ’80s, the nation’s political and economic climate had changed. If it wanted to survive, Modern Times would have to change as well.

The bookstore broadened its focus to meet the literary needs and interests of progressive people and the Latino community. It developed the city’s first broad selection of Spanish-language literature and non-fiction. It was among the first bookstores in San Francisco to feature feminist and queer sections. From poetry readings to its Fall Zine Expo showcasing local artists, the variety of events it has hosted over the years made Modern Times a gathering place.

Mahaney and her associates have many ideas for how to make Modern Times a vibrant community space again, from new books to expanded lighting and more comfortable reading chairs.

“We want to make it more of a place for people to hang out and have meetings and events,” she explains. “We want to have all sorts of new events, not just readings. We’ve been remodeling and we have a wonderful space in the back now that works really well for small things. We just need people to find us again.”

Before this new vision of Modern Times can be realized, it will have to find some way to get rid of the debt it incurred trying to pay the rents on Valencia Street.

“We’re hoping to raise $60,000 by the end of January,” Mahaney states. “We need more than that ultimately, but $60,000 will take care of a lot of the back debt and get us going so that we’re on more stable footing. If we can raise that, I think we have a chance. We can make it on the kind of business we have at this point and earn the rest of what we need more gradually, but we need this push first.”

Modern Times has reached out to the community for the help it needs with an Indiegogo campaign. Donations can be made via the Indiegogo website at www.indiegogo.com/projects/save-modern-times-books, or to the bookstore itself, either on its website or in person.

Friends are spreading the word through e-mail and Facebook. During meetings held in the store, these people have spoken up about how important its presence is in the city, and how much they want to see it survive. If the money cannot be raised in time, there is a good chance that Modern Times will shut down.

“We really, really don’t want to do that,” Mahaney is quick to declare, “but we cannot continue to operate at a loss at this point.”

When the bookstore first moved to Valencia in 1991, the street was very different. Then, gentrification hit quick and hard. Witnessing the same transformation on 24th Street, the purveyors of Modern Times have joined the anti-gentrification and anti-eviction cause. It might be too late though; the twin plagues might have already fatally infected the bookstore.

“I’ve known Modern Times as a really important part of the fabric of the city since they opened,” says Paul Yamazaki, a coordinating buyer for City Lights, the legendary local independent bookstore harking back from the days of the Beat Generation. “They were not only great booksellers, they were also great citizens of San Francisco.”

City Lights is doing remarkably well, considering the recent economic crisis and the specific hardships that have afflicted the print industry. The last three years have been its best three years, but Yamazaki sees what’s happening to the city.

“We’re losing our economic diversity, which has been such a key part of how San Francisco has developed,” Yamazaki states. “When we lose artists and arts organizations, we lose another thread of that tapestry that’s made San Francisco such a rich and vital place, that diversity of voices. And if we let this continue happening, we’ll walk down 24th Street 10 years from now, and we’ll see not a lot of independent businesses, but a lot of places that look like anywhere else in the United States.”

Whenever Yamazaki finds himself on Telegraph Avenue in Berkeley, where the independent bookstore Cody’s Books stood from 1956 to 2008, he feels a hole in his heart. He knows the hole made by Modern Times will be even bigger because of the bookstore’s unique political role here.

“It represents a real important part of the politics of the Bay Area, and has been able to keep us informed about a variety of issues throughout its years,” he explains.

This is the bookstore whose phone rang off the hook when the Gulf War began, with calls from people from all over the city who wanted to educate themselves about the Middle East and the economics of oil. In the immediate wake of 9/11, it was here that one could attend a series of lectures investigating media and military responses to the event.

Back in the heyday of protests and demonstrations, Modern Times was who you called to ask where the rally would be starting that day. And if you were arrested by the evening, your one phone call would often go to Modern Times as well, and they would find you a lawyer. There aren’t as many demonstrations as there used to be, but the bookstore remains a crucial source of progressive political information because it has never abandoned its core objective—the mission of keeping dissident ideas in circulation.

“If we close, it would be a symbol that San Francisco is really changing,” Mahaney concludes. “There’s a lot of people with a lot more money coming to the city, but not always with the politics that the city has had in the past, the politics that we represent. That’s why I think we’re a symbol that is important to try to sustain. If San Francisco cannot sustain a progressive bookstore, who can?”