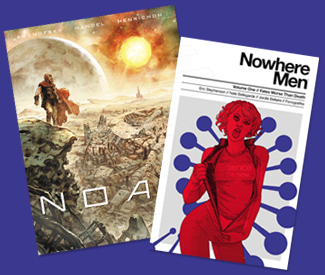 LIT Comics have grown a lot since their humble early days, when superheroes seemed confused as to whether their underwear belonged on the inside or the outside of their tights. Now anti-heroes and tales of personal tragedy guide the ink on the page as often as not, and Berkeley-based publisher Image Comics leads the pack in pushing comic stories to wonderfully dark places.

This year’s Image Expo is an opportunity to rub noses with comic authors whose work is still cool, dammit, even if their work is crossing into the mainstream. We’ll forgive Walking Dead creator Robert Kirkman for letting his comics get turned into a TV show and videogames, if only because they expand the captivatingly complicated, zombie-infested universe he first created on paper.

Image publisher Eric Stephenson attributes the company’s success to its creator-owned model, which might explain why the Telltale-made Walking Dead video games are so good — Kirkman owns the rights to his Walking Dead, allowing all the creative control that entails. Though Kirkman may be one of the shiniest stars at the expo (he gets his own panel, by his lonesome!), he’ll be one of over a dozen comic creators to nerd out over.

Heavy-hitters like Jonathan Hickman (East of West and The Nightly News), Matt Fraction (Sex Criminals and Satellite Sam), Nick Dragotta (East of West), and Kelly Sue DeConnick (Pretty Deadly) will all be on hand. East of West in particular has garnered critical acclaim, and made the New York Times best seller list in October. It has much to love, but the setting is as interesting as any of its characters. It’s an alternate reality-history-dystopian future yarn pitting the Four Horsemen of the Apocalypse against the president of the United States. What’s not to love?

The expo also offers a good opportunity to meet newer artists too, if only to say you knew them before they were a big deal. Ales Kot is one of those up and comers, and his series Zero is an espionage and war story in the near future with disturbing echoes of the present — from Manning’s leaks to our near constant state of war. It’s frank about its brutality, neither glorifying nor hiding it away.

Locals are making their mark with Image as well. Bay Area author Antony Johnston and artist Justin Greenwood’s Fuse concept is “what if a detective story was set on Battlestar Galactica?” (Thanks Johnston, you’ve got me frakkin’ excited now.) It won’t be out until February, but a preview of the comic had my sci-fi loving self drooling over a Babylon 5-like cylindrical space station — but the story is almost Sherlock-like, a genuine whodunit.

With WonderCon’s recent move to SoCal, Image Expo’s Bay Area foothold is more vital than ever. But though it will no doubt yield a handful of cosplayers and swag-hunting fans, Image’s event — now in its second year in its current format — tends to be a lot cozier than WonderCon (or the mightiest behemoth of them all, Comic-Con). With just 600 attendees in 2013, compared to Comic-Con’s 100,000-plus, the comic creators were able to chat with readers at length.

Image’s Stephenson will be my main reason for bum-rushing the expo. Taking time away from his duties as publisher, he penned the recently anthologized Nowhere Men, which rocked, hard. The story of a Beatles-like group of scientists (because science is the new rock ‘n’ roll), it tells a tale similar enough to Frankenstein’s monster — but watching the characters justify their choices is fascinating. Sure, they end up ruining the lives of their test subjects and turning them into twisted super powered monsters, but they meant well, right?

The series will continue through the year, but it can’t come soon enough. (Maybe new Nowhere Men developments will be revealed at the expo?) Though there are only a dozen comic-creator attendees listed on the event’s website, an email from Stephenson hinted that unannounced surprise guests would bring the count of artists and authors to over 20. The slated panels center around the comic artists, the “eccentric” lives of comic authors, and an “interrogation” whose purpose is to deduce where comic creators get their inspiration.

“We have a very ambitious year ahead of us in 2014, and I think some of what we reveal at Image Expo is going to surprise a lot of people,” Stephenson said. *