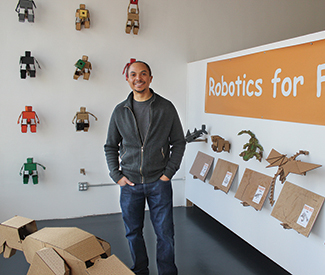 CAREERS AND ED For most of the working world, cardboard represents little more than a recyclable material, something to hold your pizza. But to Jutiki Gunter, cardboard is a construction material with near-limitless potential.

Gunter, founder of Robotics for Fun (www.roboticsforfun.com), an Oakland-based robotics retailer and workshop, can seemingly build anything out of it. He can then take that anything and program it to move on its own. After that, in an exhibition of what is arguably his most impressive talent, he can teach you to do the same.

All it requires is some digestible training, an easy-to-assemble kit, and a bit of imagination. And while Robotics for Fun offers popular adult workshops, it’s the youth program that stands out. “My goal has always been to teach kids what I learned at a professional level,” said Gunter, who holds degrees from Cornell and Harvard in architecture. “If we can introduce them to those concepts early, they’ll be able to move things much further along.”

Dominating the entryway inside Robotics for Fun are dozens of colorful home-cut creations hanging on the walls. A scorpion is proudly displayed next to a penguin perched near an owl. An alligator sits beside a pterodactyl, flanked by a frog, shark, and rhino. The taxidermy-like display might seem morbid if these animal-like cardboard creations didn’t also come to life robotically. But nearly all of them do — and their little Dr. Frankensteins are usually fresh out of kindergarten.

“We’ve found that the kids can understand it conceptually as young as six, but they can’t really retain the information younger than that,” said Gunter. “By six, seven, eight, they can do the projects.”

Those projects start off simple: Most of the beginning classes center on preconstructed “kits” that are made in-house, composed of either Lego pieces or cardboard. The students conceptualize the project, construct the model, then do the requisite programming and circuitry to mobilize their robot, if the model they’re working on is capable of handling motorization.

But in the advanced classes, things get more intricate. And far more creative. “We used to work with Legos, but once the kids started wanting to make their own designs, we started showing them how to make robots out of cardboard, so they could learn to prototype and create any piece that they want.”

Results: awesome. Students have built climbing “rescue robots,” artificially intelligent vacuum cleaners, rovers that run on auto-pilot, even a car-like vehicle that can travel within a 30 mile radius at 15 miles an hour.

Behind the workbench is his most important piece of equipment: an Epilog Legend EXT laser system. The laser-etcher is necessary to create parts with the precision robotics require, and the process itself looks like a microscopic manifestation of the laser-obsessed Archimedes.

The fewer limitations Gunter has when it comes to what he can do, the fewer limitations the kids have when it comes to creation. And for Gunter, fewer limitations is what this is all about. “We’re teaching kids skills here that they’re not even learning in first year college, and why not? They love it, they have the ability to do it, they have the capacity to understand it. Of course, we want to give kids a fun experience. But my real, ideal goal is to give them advanced skills at a young age and see what they can do with it.””