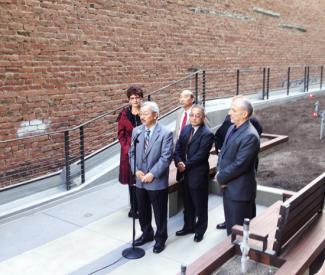 Mayor Ed Lee announced an executive directive on Dec. 18 for all San Francisco government departments with a hand in housing development, to prioritize construction of affordable units.

The Department of Building Inspection, Mayor’s Office of Housing, Planning Department and others have all been directed to tailor their activities to the directive — a stark indicator of just how potent this issue has become after months of high-profile evictions and progressive organizing and demonstrations.

“It isn’t always on the private sector, we’ve got to have a stake in the action as well,” Lee told reporters. “(San Francisco) is expensive. But we don’t have to accept it. We can do something.”

With the tech-fueled housing crisis pricing out San Franciscans left and right, and Ellis Act evictions surging 170 percent in the last three years, the city is in dire need of housing help. But as progressives have noted before, you can’t simply build your way out of this crisis, as Lee acknowledged.

Peter Cohen, co-director of the Council of Community Housing Organizations, said Lee’s plan sounded like a step in the right direction. “The proof’s in the pudding, of course,” he said. “It’s the kind of directive that I wish, honestly, would come out a year ago. The answer has been, let’s keep building and hope it fixes itself.”

Lee made his announcement at the nearly finished Natoma Family Apartments, a new affordable housing development. The building will have 60 units, and will open in January. The number of San Franciscans who applied to live there? 2,806.