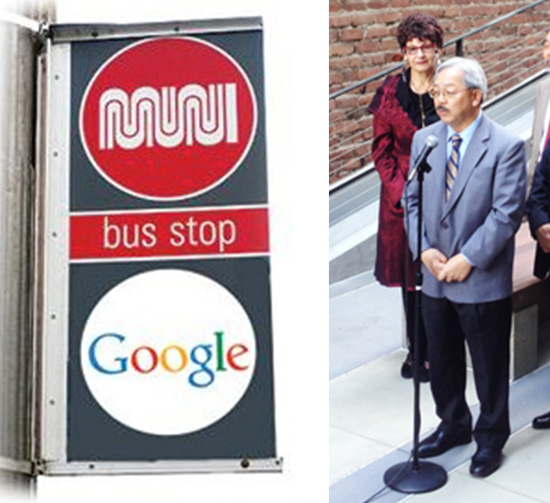 In Guardian News Editor Rebecca Bowe’s article in the print edition of the Bay Guardian this week, the San Francisco Municipal Transportation Agency spokesperson Paul Rose tells her that although there is a proposal in the works to regulate them, the SFMTA won’t profit a single dime from the plan.

“We are developing these policies to better utilize the boarding zones for these shuttle providers,” Rose said. “What we’re trying to do is provide a more efficient transportation network.”

But everyone in San Francisco who has ever ridden Muni knows that it struggles to run on time, and chronic underfunding is a perennial Muni problem. It even hurts the city’s bottom line, depressing our economy by over $50 million a year, according a report from the city earlier this May.

The report also highlights the cost to overhaul Muni between now and the year 2020: over $167 million would be needed to overhaul the system.

So why not make a few bucks from tech companies using Muni stops, who, according to the city, cause Muni delays?

We asked Mayor Ed Lee that very question at a press conference today. You can listen to his answer in the audio embedded below, or read the transcript for yourself.

San Francisco Bay Guardian: “Housing is one aspect of this, but transportation is another. The MTA’s plan to deal with tech buses is cost neutral. Is that a missed opportunity to get additional funding for Muni?”

Mayor Ed Lee: “Not a missed opportunity. That’s the essence of that 2030 task force, transportation task force, that we put together where they send a report to me, I’m in a process of reviewing all aspects of that.

Muni officials themselves were directly involved in producing that very comprehensive review along with our Planning Department and many in fact all of the departments here had implemented them.

Transportation is not just about Muni, it’s about all the modes of how people get around the city. You can’t forget that, because that’s a really big part of the task force’s work.

How to get people walking. How to get them bicycling safer and more. How to get cars less, and the cars that do, get them through where they have to go without stalling and congesting.

How do you invest in Muni? In its assets, in its transportation, in all of its aspects. How do you work with taxis and all the other car-sharing and automobile sharing companies. It’s not just about taxis, by the way. I hear from my taxi friends as I walk around City Hall, they don’t want to be left behind so we want to bring them in to see the new exciting use of Uber carshare and Lyft… all of those modes have to be paid attention to at the highest level, including investing in the assets of Muni.

I want Muni to be the choice.”

Earlier in the press conference Lee voiced his opposition to all of the hatred pointed at tech companies.

“People, stop blaming tech, tech companies,” he said. “They want to work on a solution. I think it’s unfortunate that some voices want to pit one economic sector they view as successful against the rest of our challenge. The reality is they’re only eight percent of our economy.”

We tried to ask a follow up question, but at the end of his answer on Muni, the mayor’s spokesperson Christine Falvey told the Guardian “We’re going to go on a tour now, this is off topic.”