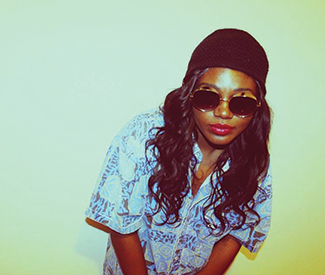 YEAR IN TOFU AND WHISKEY Call it the Rookie Magazine trickle-down effect: Teen girl rockers ruled the world in 2013. Granted, some 20-somethings were in there too. But still, these young and fierce ladies — celebrated on either Rookie’s more polished site or eye-popping Tumblrs of a similar demographic — were the artists to take notice of this year.

The young majors of 2013 were 17-year-old New Zealander Lorde and Los Angeles sister trio Haim, all in their early 20s. There were also female rappers and soul singers, like Cameroon-raised Lorine Chia (20), and Brooklyn-based Angel Haze (22). Locally, there was teen surf pop quartet the She’s. On a smaller scale, there are emerging acts like Sacramento’s sister duo Dog Party, which, at ages 14 and 17, released its biggest record to date on Asian Man Records this August.

Rookie is the web magazine for young girls that looks more to the Sassy archetype than Seventeen, but so far beyond those bounds that it’s almost ludicrous to compare the two. Started in 2011 by now-iconic mini fashion blogger Tavi Gevinson, the website blends style, feminism, and culture into a Nylon-esque vision of rude glamour. More so, it’s become a casual, glittery hit-maker, simply by nature of showcasing exciting new talent early in the game, often before it’s been hungrily shredded by the widespread blogger industrial complex.

Musicians are featured in gushy profiles, or longer Q&As, often with more personalized questions than are found on standard music blogs. An early Rookie writeup on Lorde reviewed her full-length record Pure Heroine (Universal Music Group) in a typically conversational tone: “I first heard Lorde, when I was in the parking lot of a Target one night. It was 10:50pm and I was in the car by myself, listening to the radio; I had just been going through a breakup and was in an awful state of mind. Suddenly this song came on with a simple beat and this AMAZING voice that made me sit up straight and turn on Shazam, which told me it was Lorde’s song ‘Royals.'”

Can’t you too remember such a time? An moment in a youthful life, alone in your car or next to the stereo in your room, the disappointments of a confusing day rushing through your mind, and then the moment a song transformed that hurt into pure joy? It might not have been a pop song, but it certainly could have been.

Thanks to the thrill of that paradoxically anti-consumerist pop song “Royals,” Lorde (née Ella Yelich-O’Connor) was undoubtedly the biggest of the aforementioned bunch of teen girls who made it big in 2013. She became a bona fide pop star in black lipstick and a poof of untamed, grungy curls. And while her look and style are certainly endlessly dissected, she came to the pop charts when there was a specific need for her new breed of mainstream-yet-still-underground-enough-to-be-weirdish sound.

In her recent essay on Lorde and others of her ilk, NPR writer Ann Powers poetically described Lorde’s step away from pop stars of the tongue-out, twerked-out Miley variety we also suffered through in 2013: “Lorde is a phenomenon because of perfect timing. She came along just when listeners were craving what ‘Royals’ famously advocates: a different kind of buzz. After a few months as the new find of early musical adopters, this droll chanteuse became notorious for suggesting that some kids might prefer to stand apart from pop’s endless party.”

Angel Haze was another standout — a stunning, pansexual, artistically rare rapper who took Macklemore’s “Same Love,” and gave it meaning, singing of her own (real) struggles with sexuality. The young artist’s debut full-length, Dirty Gold, doesn’t even see release until January 2014, but her covers (she also took on Eminem’s “Cleanin’ Out My Closet”) made her a name to know in 2013.

Haze was featured on Rookie, as was soul singer Lorine Chia. A performer with a silky voice and tropical beats, Chia released an EP, Naked Truths (Make Millions Music), in October and frequently Tumbls her fascinating life and favorite musical finds. Like other young females who made their mark this year, she seems worlds apart from the sleek pop stars of yore, still enthralling but somehow approachable.

And then there was Haim, the crunchy, LA-based sister trio that hit it big with September-released Days Are Gone (Polydor Records, Columbia Records). The album went silver, selling nearly 90,000 copies stateside, which is big news in these unwieldy music industry days.

But apart from the pop and hip-hop charts, teen girls were also making waves in smaller local scenes. Case in point: The She’s. The talented, breezy-surf pop quartet started off the year playing Noise Pop and were on the cover of the Guardian, posed as a group to watch in 2013.

A few months later, there they were: life-sized on bus-stop posters plastered around downtown as part of that big Converse campaign that overran the city’s music scene this summer (not that we had anything to do with the leap). The She’s recorded a track for Converse’s Rubber Tracks popup station at Different Fur Studios, and also played a ton of shows throughout the year. Oh, and the SF natives all just graduated from high school.

As for Sacramento’s burgeoning Dog Party, the sister duo is still navigating those studious halls of yore. Singer-guitarist Gwendolyn Giles is a senior in high school, and drummer Lucy Giles is a 14-year-old sophomore. They started playing together at ages 9 and 6.

“Before [guitar] I played the flute, but that wasn’t for very long because I like guitar,” Gwendolyn tells me from their Sacramento home. “The flute made me dizzy. Also when I was in fourth grade, American Idiot came out and I was obsessed with Green Day.”

Lucy pipes up with her earliest inclination that she wanted to play rock’n’roll: “I was really into the White Stripes when I was in third grade. I like Meg White and so I just kind of decided I wanted to play the drums.”

Her dad picked up a drum set at a garage sale, and the girls soon began lessons, and then started writing songs — with angsty lyrics about worrisome BFFs and the like, and stories that were mostly autobiographical. In 2013, the Giles sisters released their third full-length, bratty pop-punk record Lost Control, on Mike Park’s legendary Asian Man Records. It stands with the Donnas, the Bangs, and a mix of other fun party punk acts before them.

Ty Segall tops their mutual list of favorite new (or new-to-them) acts of 2013, followed by the Descendents, the Babies, fellow SacTown locals Pets, and most of the Burger Records roster.

“My sister and I really love Ty Segall,” Gwendolyn gushes of the prolific rocker. “He’s amazing … my favorite artist of all time.”

Dog Party went on a full US tour with Kepi Ghoulie (of ’80s band Groovie Ghoulies) and just last week played with the Aquabats at Slim’s. Next up, they’ll play the Gilman Fri/20.

As with other female artists this year (and for the past decade), Dog Party has had to deal with web trolls intent on breaking them down.

“Now that we’ve gained a little bit of popularity, there have been some nasty things written about us on the Internet,” Lucy says. “But that doesn’t really affect us. We don’t like to listen to what they say because we don’t really care.”

While the Giles sisters hadn’t known about Rookie before they were featured on the site, they’ve heard a lot of feedback since the post, which urged readers to “stream the new album by our (and probably your) new favorite band.”

“We got a lot of attention from Rookie,” Gwendolyn says. “People have come up to us and been like ‘Hey, I heard about you from Rookie!’ It’s pretty cool.”

“Our social media sites had a pretty big boost off that article,” adds Lucy.

Tofu and Whiskey’s top records (and sandwiches) of 2013