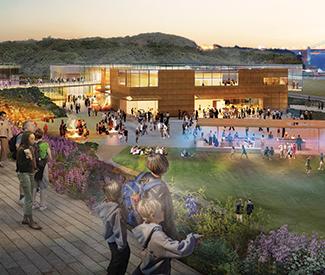 The battle over the cultural fate of the otherwise outdoors-oriented Presidio could hit the pause button once again after a high-level letter sent to the Presidio Trust recommended the governing board put a hold on the already slow-moving selection process for a new museum to replace the Sports Basement.

The questions so far have been: Is the proper use of the land one that would allow wealthy filmmaker George Lucas the opportunity to house his art, or would the space make more sense as an interactive museum dedicated to the natural history of the Presidio? Now, this question is being raised: Should any new museums be opening on the Presidio’s quasi-parkland before a larger vision for the Presidio is created?

The Dec. 12 letter from Frank Dean, general superintendent of the Golden Gate National Recreation Area (GGNRA), recommended that the Trust wait for “several years” before deciding exactly which museum should occupy the choice piece of property on the city’s northwestern coast.

“We appreciate that the Trust Board has at least temporarily delayed reaching a decision on the future use of the Commissary site,” Dean wrote in the letter addressed to the Presidio Trust. “However, we must again express our strong recommendation, echoed by many others, that the Trust defer any decision for several years to allow the site to develop in a more comprehensive, thoughtful, integrated, and planned manner.”

Citing a lack of “programmatic and architectural fit,” the letter deemed all three proposals — The Presidio Exchange (PX), the Lucas Cultural Arts Museum, and The Bridge/Sustainability Institute — unfit for imminent development.

But while both the Presidio Exchange and The Bridge plans were referenced philosophically, Dean name-checked the Lucas Cultural Arts Museum with specificity.

“From the information that has been presented to the public to date,” Dean wrote, “we believe the program of the proposed Lucas Cultural Arts Museum has no genuine or substantive connection to the themes or programs of Crissy Field or the Main Post, or to other Presidio-connected themes that extend far beyond the boundaries of the outpost. While the programs of the proposed museum seem interesting, the museum’s offerings could be located anywhere; therefore, the museum does not merit one of the most important sites in the entire Presidio.”

The finalists for the museum site at mid-Crissy Field answer questions about their proposals (including filmmaker George Lucas).

It is a sentiment held not just by the GGNRA. Supporters of the more synergistic Presidio Exchange plans think the delay in decision will only strengthen the position of both their plans and those of The Bridge/Sustainability.

“I agree with the Trust’s stance,” said Becky Evans, local chair of the Sierra Club. “The Lucas plan fulfilled none of the requirements except for the one about economic feasibility. It didn’t fit in with the park or the surrounding area.”

“The [Presidio Exchange] has done an excellent job, in terms of in a few months preparing their proposal. But there is some value, I think, in waiting to see what the new open space will look like when the tunnels are finished and the bluff is in place,” she said.

But before supporters of the PX declare victory, note that the letter sent to the Presidio Trust was just a recommendation, not a declaration. The Trust could theoretically buck the advice, hand the Sports Basement keys to George Lucas’ group, and then wipe its hands clean of the project; after all, Lucas has offered to foot the bill for his entire project.

“[The recommendation] is not something that automatically makes them hold the process up,” said Alexandra Picavet, spokesperson for the GGNRA. “It’s up to the Trust to assign what weight they would give our recommendation. They could decide not to use it all.”

But, according to GGNRA Director of Communications Howard Levitt, even if the recommendation is ignored, the delay could last indefinitely: Even after a proposed plan is accepted by the Presidio Trust, it would still have to undergo a “follow-up environmental impact statement, done by EPA, [pursuant to] the National Environmental Policy Act, and so we’ll continue to be engaged in this thing going forward.” So, even after a plan is approved by the Trust, the EPA could still hold up the process moving forward.

Those in favor of the proposed moratorium, however, seem to think that the Presidio Trust (who had not yet responded for comment at the time of publication)will agree with the initial recommendation.

“The Park Service’s main responsibility is to protect the resources of the park,” said Evans. “And they’ve been walking, I think, a very fine line trying to do that without coming out specifically and saying, ‘Don’t pick Mr. Lucas.’ I mean, obviously it’s not an appropriate choice.”

Who and what the appropriate choice for the old Commissary ends up being, however, is still up for debate.

For now, it’s a Sports Basement; the only true winner from the GGNRA’s most recent recommendation. At least for now, it may get to stay.