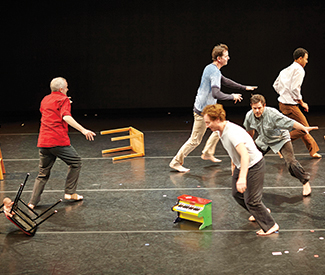 YEAR IN DANCE This is not 12 Days of Christmas but 12 Months of Dancing. And while there were plenty of lords-a-leaping and ladies dancing (and even a few drummers drumming and pipers piping), there is nothing even remotely accumulative in this annual looking-back at the year that was. Chronology — and what stood out within a particular month because of the generating ideas — and their shape on the stage determined the (sometimes difficult) selection.

January Bebe Miller, a feminist post-modern choreographer, has been making work for over 25 years. So her multimedia A History (Jan. 25, Yerba Buena Center for the Arts), announced as a piece about “remembering remembering,” sounded just about right. It was and it wasn’t. The concept proved more intriguing than its realization, but watching the work attempt to give shape to complex ideas offered its own satisfaction.

February Modern dance repertory company Hubbard Street Dance Chicago teaming with Alonzo King LINES Ballet in the gorgeous Azimuth (Feb. 2, Cal Performances) seemed like one of the year’s unlikelier projects. Yet to watch Hubbard’s dancers take to LINES’ skewed approach to ballet with such ease — and seeing King rise to the challenge of choreographing for a large ensemble with utter confidence — was surprising and delightful.

April As an Indian American dancer, singer, musician, writer, and actor, Sheetal Gandhi has a lot of resources. She excellently drew on all of them for Bahu-Beti-Biwi (Daughter-in-Law, Daughter, Wife)(April 19, ODC Theater), her humorous and poignant portrait of the restrictions that still shape Indian women’s lives, both in this country and in India.

May The wild applause notwithstanding, it was such a relief to watch the end of Eifman Ballet of St. Petersburg’s overwrought Rodin (May 11, Cal Performances), based on the sculptor’s relationship with his pupil and lover Camille Claudel. You try to keep an open mind about an artist’s take on ideas, but sometimes it’s time to say “enough is enough, never again.”

June Though we also got versions by Yuri Possokhov and Bill T. Jones this year, Mark Morris and the Bad Ass Jazz Trio’s Spring, Spring, Spring (June 12, Cal Performances) was the most radical as well as most cogent reinterpretation of The Rite of Spring. Forgoing the original choregraphy and using the score’s four-hand version as musical inspiration generated a work of both ease and heft.

July Serendipity ruled. I happen to catch Pierre Lacotte’s approximation of what Parisian audiences might have seen in 1832 with La Sylphide (July 9, Palais Garnier) generally considered the first Romantic ballet. Excellently — of course — performed by the Paris Opera Ballet, this version looked like a distant cousin of the one we know, and offered a feast of classical dancing set to a score with hokey charm.

August ODC/Dance’s yearly Summer Sampler (Aug. 2-3, ODC Theater) is such a smart idea. As these superb dancers adapt themselves to their more intimate “home” theater and afford an opportunity to observe them up close, they newly reveal themselves as individuals and as a group. This year’s splendidly performed program showcased ODC’s most recent creation, the splendid Triangulating Euclid, Kimi Okada’s sparkling new Two If By Sea, and the company premiere of Kate Weare’s The Light Has Not the Arms to Carry Us.

September The San Francisco Dance Film Festival (Sept. 12-15, various venues) is growing up fast. This annual showcase of screen dance — the intricate partnering of two motion-driven arts — more than ever impressed with the range and quality of its lineup: shorts, documentaries and filmed versions of stage performances. Amy Dowling and Austin Forbord’s Well Contested Sites, filmed on Alcatraz with professional performers and former prisoners, carved itself into your brain as well as into your heart.

October Somehow artists manage to scratch enough support together to keep working (and eating, and living) in the Bay Area. So anniversaries still happen. But I can’t remember a recent one as joyous as Rhythms of Life: Down the Congo Line (Oct. 5, YBCA) for Dimensions Dance Theater’s 40th. To see a whole generation ready to build on what Deborah Vaughan has started was not the least of its gifts.

November In Joe Goode’s Annex, Jo Kreiter’s Flyaway Productions just may have found a home. The venue’s two-story ceilings and industrial look allowed Kreiter to add some discreet ladders, wires, and ropes as support structures for the aerial work she set on her six athletic women dancers. You can take the metaphor inside the piece any way you want, but Give A Woman A Lift (Nov. 8) soared.

December Like it or not, parenthood is life-changing. Maybe that’s why, in Father On (Dec. 5, ODC Theater), Scott Wells’ five dancers — four of who are recent dads — looked not only sleep-deprived but also often frantic. The one non-dad, Rajendra Serber, was the ultimate outsider. Using game structures and sports imagery, Wells created a hilarious but also curiously affectionate piece about the challenges and confusions encountered by the male and his kid. The lesson on becoming a sensitive father left me laughing through tears. *