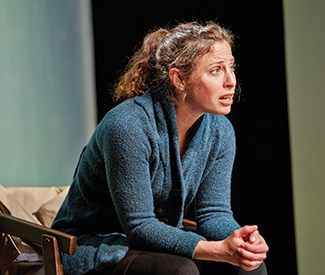 YEAR IN THEATER Before the holiday season crushes us in its tinsel-glinted maw and poops us out into 2014, it’s time to cast a backward glance and ponder 2013’s best moments in theater and performance.

Most satisfyingly enigmatic flights Getting lost can be a good thing. It can concentrate the attention, heighten the senses, activate the imagination, leave room for reflection — and leave something to talk about afterward. This is as true for a visit to the theater as it is for a walk around town.

Without detracting from the power that can attend even the most didactic of narratives, let’s hear it for the productions this year that did not shy away from abstraction and mystery, as in Shotgun Players’ staging of Linda McLean’s strangers, babies or (more radically, if in workshop form) Affinity Project’s Nocturne (the best part in foolsFURY’s inaugural Factory Parts, a works-in-progress festival). (Robert Avila)

Best Habitués of the Home Theater Circuit We’re big fans of the Home Theater Festival and the back-to-the-basics performance model it so ably demonstrates. But where the festival ends, at the threshold of one’s own doorstep, the notion that there could be a whole DIY living room tour circuit is gaining ground. Two recent exemplars of this lo-key, high-mileage approach are Sebastopol’s the Independent Eye, which just returned home from a month-long, cross-country sojourn during which it performed 17 shows — nine in living rooms — and San Francisco’s Right Brain Performancelab expanded its private-home Due West salon into a roving three-weekend run of its 10-year anniversary performance, What Stays?, from Half Moon Bay to Oakland. (Nicole Gluckstern)

Most “Twisted” take on the big screen Dogugaeshi at Zellerbach Playhouse. Combining his own brand of invention and humor with the titular ancient Japanese form — in which moving sets of painted screens coaxed the eye through a seemingly infinite recession of figurative and abstract environments — master puppeteer Basil Twist and his deft collaborators created an opulent, entrancing, even mystical journey that ranks as one of the purest theatrical experiences all year. (Avila)

Most Pervasive Unofficial Theme for 2013: “Losing my Religion” While our headlines were more concerned with political détente and economic implosion, our stages were full of struggles of a more personal nature: that of religious belief (or lack thereof). With works like Tanya Shaffer’s Siddhartha-inspired musical The Fourth Messenger; Mugwumpin’s mesmerizing fall from prophetic grace, The Great Big Also; the epistemological ponderings of a dead felid in SF Playhouse’s Bengal Tiger at the Bagdhad Zoo; and the wounded evangelicalism simmering in Aurora Theatre’s A Bright New Boise, both actors and audiences were forced to confront questions of faith in ways that pointed to unresolved unease on both sides of the pulpit. (Gluckstern)

Most overdue Bay Area debut The Wooster Group + New York City Players at Yerba Buena Center for the Arts. This production of three of Eugene O’Neill’s early seafaring one-acts seemed to flummox many, though the audience I sat with seemed as riveted as I was by the strange, challenging approach to these texts. Certainly it was a little misleading to describe this as a Wooster Group production — despite having two Wooster actors in the cast and a Wooster set, it was very much in debt to the idiosyncratic and deeply committed approach of director and playwright Richard Maxwell and his NYC Players, who made up the majority of the cast. A long overdue Bay Area visit by these acclaimed companies, it anyway made for one of the more distinctive and provoking encounters between actors and audience all year. (Avila)

Most Memorable Elementals In Aurora Theatre’s production of Max Frisch’s The Arsonists, fire played an ominous role, a tool deployed to destroy the civilization it helped build, while in Ragged Wing Ensemble’s collaborative Time Sensitive, ice took the main stage, with a dripping block signifying both the passage of time and the impermanence of the material world. While at first glance the two plays were to each other as fire and ice — one a carefully modulated farce, the other a frenetic roller coaster of status seekers and secret keepers — both inventively explored common themes of moral decay and the follies of keeping up appearances in a society full of questionable values and diminishing spiritual rewards. (Gluckstern)

Best performance of herself Judith Butler at CounterPULSE. The famed philosopher and theorist of the performativity of gender appeared as part of the ongoing Dance Discourse series, in dialogue with CounterPULSE’s Julie Phelps and outstanding performances by artists DavEnd, and Xandra Ibarra and Hentyle Yapp. While confessing it was not always easy “performing Judith Butler,” the Berkeley prof proved game, contributing to an exceptionally lively cross-disciplinary encounter. (Avila)

Playwriting Series Most Likely to Win a Gold Medal: San Francisco Olympians Festival Here be giants. Plus gods, mortals, and mythological creatures brought to often hilarious life by dozens of local playwrights and theatre artists over the course of three weeks. The brainchild of No Nude Men’s Stuart Bousel, the festival features an array of thematically-connected staged readings featuring characters long forgotten by contemporary audiences: Teucer, Thersites, Laodike, Cruesa, and Neoptolemus, to name but a few. Not content to stick to the script, SF Olympians offers a corresponding gallery show of fine art, encourages wild experimentation such as the debut installment of Megan Cohen’s crowd-directed “Totally Epic Odyssey,” and has even generated a book of new plays (Songs of Hestia, EXIT Press 2011). (Gluckstern)

Most persuasive British accents Ian McKellen and Patrick Stewart in No Man’s Land at Berkeley Rep. In fact, the pair, true British theater royalty, made it all look so easy. (Avila)

Theater Company Most Likely to Boldly Go… Whether a given production is a hit or miss, Cutting Ball’s commitment to staging new absurdist and experimental works has secured it a very important spot in the Bay Area’s theatrical firmament. And although very different in content, the world premieres of Andrew Saito’s boldly apocalyptic Krispy Kritters in the Scarlett Night and Basil Kreimendahl’s quixotic, gender-queer vaudeville Sidewinders provided an essential sounding board for two bright new talents who would have otherwise struggled long to find homes for their misfit children. (Gluckstern)

Best mess Anthony Rizzi’s An Attempt to Fail at Groundbreaking Theater with Pina Arcade Smith at Kunst-Stoff. The Frankfurt-based American performer and former William Forsythe dancer took over the Grove Street loft space for three glorious nights in February as a magnificently straight-shooting queer amalgam of Jack Smith, Penny Arcade, and Pina Bausch, flouncing, crawling, and climbing around the bric-a-brac properties strewn around the room, dancing with anyone who wanted to, dropping a laptop from a ladder (ostensibly by accident), and generally flailing with memorable brio and brilliance. (Avila)

A Few Luminous Performances That Reminded Us There Are No Small Actors, Only Small Stages Donald Currie as Sandy in Cutting Ball’s Sidewinders; Nick Medina as Belinsky in Shotgun Player’s Shipwreck; James Udom as Freddy in Performers Under Stress’ Scamoramaland; Tamar Cohn as the Old Woman in Cutting Ball’s The Chairs; Safiya Fredericks as Sydney in 42nd Street Moon’s It’s a Bird…It’s a Plane…It’s Superman; and Amy Lizardo as Yitzhak in Boxcar Theatre’s Hedwig and the Angry Inch. (Gluckstern)

Most promising solo debut Safiya Martinez in So You Can Hear Me, at the Marsh. Writer-performer Martinez memorably recounted her shattering experience as a 23-year-old special ed teacher in the South Bronx, inhabiting lives and personalities still too rarely seen on any stage, and with a precision and verve equally uncommon. (Avila) *