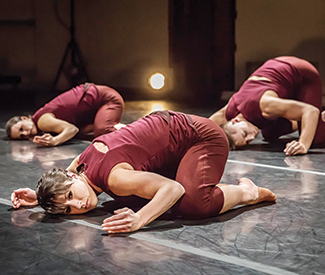 DANCE RAWdance packed enough movement material into its new Mine to tempt lesser choreographers to dilute it into a much longer work than this quintet’s 55 minutes. But that’s not who Wendy Rein and Ryan T. Smith are. Here joined by Kerre Demme, Aaron Perlstein, and Laura Sharp, the duo created choreography pared down to its essence where every head turn, every lurch, every stabbing leg counts. The work has nothing to with excavating minerals; it has everything to do with possession — what we have or want control over, be it property, physical space, or other people.

Pre-performance images suggested a bunch of people tied up in hanging ropes. Thankfully, none of that materialized. Instead of ropes — they did enter as one of very few props — scenic designer Sean Riley used strands of string for what looked like a three-dimensional map in which multiple roads coalesced into a single point. They reminded me a little of those air routes maps you look at in in-flight magazines when you have run of others things to do. Hanging from the Joe Goode Annex’s high ceiling, Riley’s rope sculpture was airy and light, yet thanks to the weights attached had a downward pull.

Mine turned out to be an intricately structured, excellently performed essay on some of our less noble instincts. Slowly, it began to appear that the idea of “mine” dehumanizes us instead of enriching us. The work started on a pure dance level with images gradually emerging to become more explicit, until a final one was so literal that I wasn’t sure whether it had not gone over the top.

As the audience walked in, Perlstein found a spot for himself. Ever so slowly the other dancers joined him in a pedestrian lineup that quickly scattered into similar but individual expressions. But common moves began to look less innocent as people moved into each other’s space. Did Sharp stumble over a prone Perlstein or did she kick him because he was in her way? A push-up position for two became one for four until the dancers waddled along like some multi-limbed creature. Sinewy and so tightly focused on each other that they looked like one evolving organism, Rein and Smith in a duet looked both delicate and unbreakable. Yet they also had the shifting wariness of boxers about them.

Anxiousness and indifference seeped into Mine like dripping fog. At one point the dancers pounced to the floor and recovered, opening their arms and looking upward as if expecting some relief. At another, like soldiers going to battle, they walked bent over but fiercely yanked their knees to their chests as if to protect them. Holding flashlights in the dark, the men impassively observed the women writhing in some kind of agony. Then it was their turn to watch Perlstein’s simple touch trying to calm a fiercely shaking Smith; it elicited rage. This was one of the few spots in Mine when you could sense a gesture emanating from personal motivation. Perlstein, previously, had shaped a piece of rope into a circle around Smith’s solo. I couldn’t decide whether he was trying to expand or limit a space for the dance.

When three wire baskets descended from the ceiling to encase dancers’ heads, I thought of those dreadful headgears that slaves were forced to wear. Here they turned the dancers into automatons, who on each quarter turn executed identical patterns of small steps. Joel St. Julien’s score — excellent throughout — began to sound as if coming from below water.

In Mine‘s fiercest section, dancers hurled themselves against the theater’s wall, where they stayed as if glued until an intruder yanked or scraped them off, forcing him or herself into the space. It was brutal because it looked so impersonal; it seemed just something that was. Sort of like Lord of the Flies for grown-ups.

But perhaps my favorite moment was also one of its simplest. Sharp danced a limb-slashing solo center space. Her colleagues watched from the corner of the square. Slowly, almost ceremoniously they moved in, shrinking Sharp’s space with every step they took. You could just feel the air constricting around her.

So what about that last image? It did involve a rope; it also reminded me of a Roman chariot. *