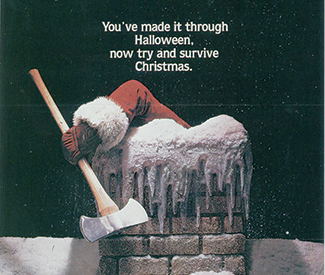 FILM Consider the giants of ho-ho-horror. Bob Clark’s Black Christmas (1974) boasted an above-average cast (Olivia Hussey, Margot Kidder, Keir Dullea, John Saxon). Christmas Evil (1980) was dubbed “the greatest Christmas movie ever made” by no less an authority than John Waters, who recorded an audio commentary for its 2006 special-edition DVD.

And then there’s Silent Night, Deadly Night (1984), which borrows several of Christmas Evil‘s plot points: a kid suffering mental damage from a Santa-related trauma grows up, unwisely takes a job working with toys, become obsessed with the concepts of “naughty” and “nice,” and eventually snaps. Christmas Evil may have the better last shot (you’ll believe a van can fly!), but Silent Night, Deadly Night is not without its sleazy charms.

Directed by Charles Sellier Jr. — best-known for creating TV’s The Life and Times of Grizzly Adams, he later segued into Christian-themed entertainment — Silent Night, Deadly Night contains scream queen Linnea Quigley, a year before her signature role as the naked, grave-dancing “Trash” in Return of the Living Dead. Though she’s only onscreen for a few minutes, her death scene (shrieking, flailing, topless, wearing jorts, piercing antlers) is Z-grade slasher gold.

Beyond Quigley’s rack (and the other boobs showcased eagerly and gratuitously herein) and some gorgeous Utah location shots, Silent Night, Deadly Night‘s memorable moments come courtesy of its creepy soundtrack. The Internet proves that least one dance remix exists of “Santa’s Watching,” a nightmarish ditty which reprises throughout the film. In the film’s opening credits, it’s a sing-songy lullaby; it plays in full-cheese form on a car radio shortly before unfortunate tot Billy Chapman sees his parents slaughtered by a baddie in a Kris Kringle costume; and it’s sung drunkenly by grown-up Billy’s co-workers at the toy store where he works.

And Santa is, indeed, watching. Early on, wee Billy’s catatonic grandfather snaps to when nobody’s looking, which is one of the film’s few genuinely frightening bits. “Christmas Eve is the scariest damn night of the year!” he croaks with cruel glee. “If you see Santa Claus tonight, you better run for your life!” Point taken, Gramps.

A few years later, Billy and baby brother Ricky are marking time at a Catholic orphanage. Billy’s still traumatized by what he witnessed (exhibit A: he punches the benevolent Santa that comes to visit the kids on Christmas), but the bitchy Mother Superior believes her punishments will set the naughty (ahem) boy right. When the film jumps ahead a few more years, Billy (played as an adult by Robert Brian Wilson) is a strapping lad employed at a dingy toy shop. He’s happy for the first time, therefore we get a peppy montage (more original music!) that spirals into darkness as soon as we realize what month it is.

Guess who’s pressed into Santa-clad service, with predictably messy results? (Not Billy’s boss, who kicks off the store’s after-hours party by announcing “Time to get shitfaced!”) Like Christmas Evil, Silent Night, Deadly Night is novel amid the 1980s slasher wave in that it follows the killer’s story, rather than empowering whatever Jamie Lee Curtis character is left standing at the end. Frankly, by the last reel, it’s a relief when put-upon weirdo Billy goes full psycho, meting out punishment among the naughty (and sparing the very few he deems “nice”).