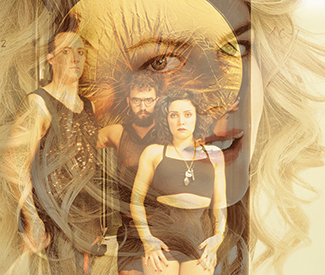 THEATER We meet above the waterfall in Yerba Buena Gardens. It’s cold, getting dark. Everyone seems relieved to get inside the YBCA theater next door. We’ll talk here for the next hour, standing around a worktable with a gold lamé circle spread over it, before the band heads downstairs to a windowless rehearsal space in the deep well of the building.

Nicole Kidman Is Fucking Gorgeous is the band formerly known as the artists John Foster Cartwright, Maryam Rostami, and Mica Sigourney. In fact, NKIFG is more and less than a band — it’s a conceit, a project title, a series of performances, maybe a forthcoming album? (They don’t know yet.) None of its members actually plays an instrument, as far as I can tell. But they do compose songs, choreography, and objects that they employ in an unfolding series of situations they as readily call parties as performances. And they will have live music infusing their show this weekend at CounterPULSE, courtesy of ongoing collaborator and perennial inspiration Deep Teens.

Embracing a loopy goth spirit, the triumvirate, which has its origins in a performance two years ago at dancer-choreographer Liz Tenuto’s apartment during the Home Theater Festival, takes its send-ups of contemporary dance and performance art tropes seriously. And for all its insouciance and nonchalant humor, the project is at some level equally as much about the crisis of three artists (two of them well-known drag queens, the other a DJ and videographer) finding a way to live and work in today’s severely stratified San Francisco. It also draws eagerly, if obscurely, from their own private lives.

As for the name, its members like to say what they do is defined by both the presence and absence of someone or something called Nicole Kidman. To hear them talk about it, Kidman starts to sound like a key swallowed by a red herring.

“Who cares about Nicole Kidman?” notes Sigourney, with paradoxical delight. “But people do care about her! She’s the perfect vessel.”

What else should you know about Nicole Kidman Is Fucking Gorgeous? The answer to that question took a rambling, circuitous form. It was ultimately put to a Tarot deck set in the middle of the table.

Mica Sigourney So the frame of this reading is around getting at the truths and dispelling the illusions around this project for you. [The first card is] the Seven of Cups, which is about illusion [versus] reality, and picking out the truth. Right now, all of us are [experiencing] an abundance of emotions, an overwhelming amount.

MS So what we need to manifest in our next step in this project — see, I don’t know if this is telling us what to tell Rob.

MR No, I think it is, I think this is great.

MS We are students of creativity…

MS So we’re not masters of this yet. We’re still learning. Page of Wands is also about adventure and following bliss really. And our final outcome is the Ten of Swords. So it means we’re being stabbed in the back!

MR The Ten of Swords looks like this: It’s all of our fears pointing toward one single spot. The Ten is when the next step is coming. We’ve reached the end of something and it’s the next thing. The Moon, I feel, has to do with a difficult birthing process. The Moon is about traversing these murky emotional territories, which we have done together and we continue to do. I think this represents our fear.

MS Can I give it a reading too?

MS Ten being the overabundance of the suit, and Tens being about communication and intellect: The outcome is an overabundance of ideas that sometimes feel like a burden, and are sometimes painful because there are just too many ideas happening. So we’re going to end up with too many ideas. Coupled with the Moon, I’m going to say our final outcome will actually be knowledge that is not measurable by the intellect and is much more intuitive and based in mystery, that is, not easily described by the mind.

MR We’re going to have to dig deeper from all of this. The Ten makes us need to take the next step.

MS And that next step is toward the dark. Well, toward intuition.

MR It is toward intuition. I think that moving toward the more Moon aspects will maybe then inform the next piece.

MR Oh, the moon, duh! But this is perfect!

MS The moon is in our piece a lot.

MS So basically, to clarify things for Rob: The Tarot reading says that we need to dispel some illusions for you. What we need to tell you is that we are about to have a moment of reckoning at this show at which we realize our values and our worth, and our sins. And what’s driving us as a collective is to reap the benefits of a good harvest, as well as learn from each other, and continue to be students of creativity, passion, and magic.

MR Ultimately, not to let our fears get us down and to know that we’re going in the right direction.

MS And this being our final outcome makes me think that maybe you should just know: “The moon.”

MS We need to shut up with all our ideas and just be like, the moon.