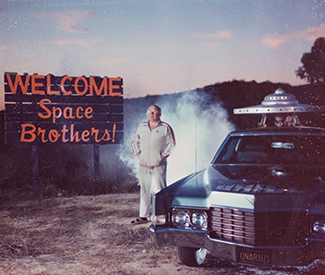 FILM El Cajon — between balmy coastal San Diego and arid desert mountains to the east — is just the sort of place where the dream of California living came true for a lot of industrious working-class people in the post-World War II boom years. It’s also where their boomer children and generation-next grandkids are currently seeing that dream slowly expire.

It exploded in the original golden age of suburban planning, by 1960 going from podunk burg to major ‘burb with 25 times the population it had had two decades earlier. Such rapid growth is seldom pretty, and today El Cajon mostly looks like a rusty old conglomeration of strip malls, ranch-style homes, and motel-like apartment complexes that probably were a little tacky to begin with. It’s certainly not the first place that might come to mind when pondering where groundwork might be laid for the coming landing of space vessels from the 32 worlds of the Interplanetary Confederation, who will arrive at last to save we holdout “Eartheans” from our endless cycles of self-destruction.

But that is exactly what El Cajon has been for nearly a half century, since Norman and Ruth Norman settled upon this place to headquarter their Unarius Academy of Science. While the Normans are long gone — from this crude mortal plane of existence, at least — their philosophy (or “UFO religion,” as some put it) lives on in a center that still ministers to and teaches an increasingly elderly community of devotees.

It also attracts a certain number of gawkers, as Unarius (Universal Articulate Interdimensional Understanding of Science) has accidentally generated its own spin-off “cult” of worshippers at the altar of camp. In the 1980s, public access stations across the nation began airing the nonprofit organization’s self-produced films and videos portraying aspects of their mythology, notably the many past incarnations of Uriel née Ruth Norman — female, male, and otherwise. (These include myriad famed emperors, prophets, geniuses, and the Statue of Liberty.) Enacted by Unarius “students” in elaborate costumes with fanciful sets and FX, these are among the most flabbergastingly wonderful “home movies” ever made — crazy narratives with the aging Ruth decked out in enough wigs, chiffon, costume jewelry, and miscellaneous spangles to float an entire convention of drag queens. If you visit the El Cajon facility, expect its keepers to be polite but wary: They’re happy to spread the gospel, but know you’re probably there for the kitsch value.

Everybody can be happy with Bill Perrine’s Children of the Stars, the centerpiece of Other Cinema’s latest “Incredibly Strange Religion” program at Artists’ Television Access this Saturday. It has scads of footage from such Unarius superproductions as A Visit to the Underground City of Mars, which if you haven’t seen such before will make you want to immediately track down their complete original versions. But it also cannily limits itself almost exclusively to interviews only with the remaining faithful. They unfailingly seem very nice, ordinary, good-humored, and not prone to hyperbole (let alone insanity), even as they testify to the occasional outlandish doctrine or personal experience.

Born at the turn of the last century, Ruth Nields was a restless, lively soul who went through a number of professions (and several husbands) before 1954, when she met electrical engineer Ernest Norman, whose past lives apparently included that of Jesus Christ. He passed away in 1971, at which point the church these “two great beings of celestial consciousness” had established started heading in (even) more fanciful directions, to the dismay of some earlier converts but the delight of many new ones. Ruth assumed the primary identity of Uriel, “Queen of Archangels,” a fourth dimension channeler who’d already materialized on as Yuda of Yu, Poseid of Atlantis, Peter the Great, Quetzalcoatl, Zoroaster, King Arthur, and JFK.

Several such lives, and prophesies of imminent extraterrestrial arrivals, were elaborately portrayed in such sci-fi spectaculars as The Arrival and Roots of the Earthmen. There were also historical epics, including one in which Norman — as a Scarlett O’Hara-like belle of the Old South — cavorts on a plantation, surrounded by what appear to be many enthusiastic young white gay men in blackface drag gushing about how beautiful and kind she is. These extravaganzas endeared Unarius to a larger audience via cable airings, though eventually shrinking inspiration or funding curtailed their production.

Unarius hardly lacked drama in its daily operations. A student turned “sub-channeler” named Louis Spiegel was cast as official “fallen angel,” a Lucifer whose bitchy ways and power plays irked many until Uriel pronounced him “totally healed” in 1984, at which point he abruptly turned into “the sweetest man.” Others jostled for the Queen’s favor, recalling their envy and arrogance now as lingering repercussions of past lives in which some presided over Uriel’s beheading in ancient Egypt or led Jews to Nazi gas chambers. Everyone was woven into the ever-evolving narrative, which sometimes closely resembled popular fantasy series like Star Trek or Star Wars. (Perrine cleverly uses old sci-fi clips to illustrate Unarius concepts.)

Ruth Norman died in 1993. The last announced date for the “Space Brothers” to visit, 2001, came and went because clearly Eartheans weren’t ready in the wake of 9/11. But Unarius survives, despite its mythology of negative energy phenomena over millennia remaining a small beacon of utopian benevolence in a world of gloating religious apocalypticists. El Cajon may turn out to be the very portal to paradise yet. *

CHILDREN OF THE STARS