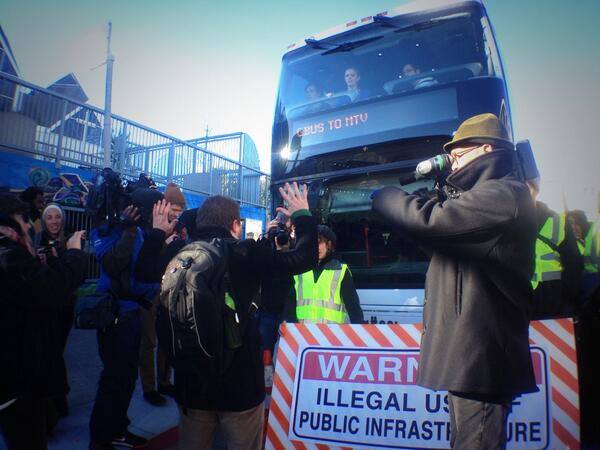 The group of 20 or so neon-yellow vested protesters called themselves the “San Francisco Displacement and Neighborhood Impact Agency.” The company doesn’t pay San Francisco a dime to use the Muni stops — fines that private auto drivers pay regularly.

UPDATE 3:58pm: Just how does a story go from breaking, to verification, to “holy shit it’s all over the internet now?” Here’s our interview with Fake Google Employee Max Alper, and our recount of how it all went down: http://www.sfbg.com/politics/2013/12/09/whyd-you-do-it-we-ask-fake-google-employee-max-bell-alper

UPDATE 12:32pm: Various tips have streamed in that this shout-out was staged. Protest organizer Leslie Dreyer talked to us on the phone and verified that this person’s identity was Max Bell Alper, a union organizer from Oakland. This person was not a Google employee, and Dreyer was not able to verify if Alper was there in the morning with the group of 20-30 protesters. The Guardian is attempting to contact Alper for comment. Dreyer said she, as an organizer, was unaware that the “performance” had been planned. We are following this as it develops.

UPDATE 1:06pm: Within an hour of our original post, the Guardian learned that Max Bell Alper, a union organizer with Unite Here Local 2850 was the man shouting down Google bus protesters earlier this morning. We asked Alper what motivated him to impersonate a Google employee.

“This is political theater to demonstrate what is happening to the city. It’s about more than just the bus. These are enormous corporations that are investing in this community. These companies, like Google, should be proud of where they’re from and invest in their communities,” he said.

When asked if he intentiionally intended to deceive media, he replied “People are talking all over the country about what’s happening in San Francisco (referring to evictions and displacement). That’s the debate we need to have here. The more we talk about it, the more we think about it, the more we’re going to see the tech companies need to contribute.”

Alper said that he did not intend to engage in theater before going to the protest, but when there made the decision, “spontaneously,” to stage the argument. When he maintained his story that this was political theater, we again asked why he did not verify his name at the protest itself — and only after the story blew up in national and local media.

“This was improv political theater,” he said.

The SFMTA has a pilot plan in the works to regulate private use of public bus stops.

Though the private shuttles were the crux of the day’s protest, the heart of the fight is over gentrification. As the tech revolution in SF leads to rising rents and longtime San Franciscans are being displaced.

In the video, a union organizer who hopped off the bus shouts down Erin McElroy, staging an argument with a protester who also heads the eviction mapping project. “How long have you lived in this city?” McElroy asked him. He shouted back “Why don’t you go to a city that can afford it? This is a city for the right people who can afford it. You can’t afford it? You can leave. I’m sorry, get a better job.”

“What kind of fucking city is this?” he shouted, and then walked off. He mentioned repeatedly that he couldn’t get to work because the bus was blocked, and did exit the bus (indicated he was a Google employee), but the Guardian (nor a nearby Al Jazeera reporter) could not verify his job title or name. If anyone has any tips as to the identity of this man, please contact us at news@sfbg.com.

(UPDATE 12:12 PM — The Guardian amended the headline to reflect our story more accurately, that though this man exited the bus and claimed he was late for work, we have not yet verified his employment at Google)

We’ll have more on this story later in the day, for now, check out footage from the protest.)