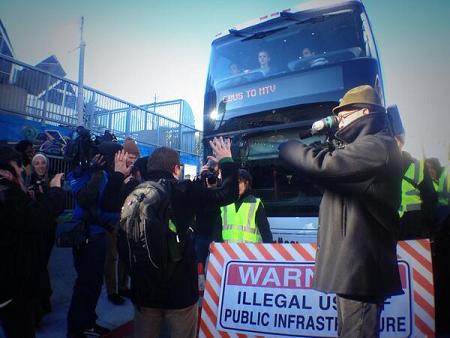 It’s been a whirlwind morning here in the Guardian newsroom. First our coverage of the surprise Google bus blockade and protest, along with a video that appeared to show a Google bus rider shouting at protesters, went viral (congratulations to getting onto our site now, it’s been hard to keep it up). Then we discovered the guy was actually protester Max Alper, who staged this intriguing bit of street theater on the spot, unbeknowst to protest organizers who had tipped us off to their event in advance.

As the editor of the Guardian, it’s tempting to second guess how we handled this incident, but I believe that we did everything right, with full transparency at every stage in the process. For better or worse, we live in an age of Internet immediacy, and sometimes stories unfold in unexpected ways right before readers’ eyes.

We were clear in our original post that we couldn’t confirm his identity as a Google employee, noting only that he had been on the bus and got off to confront the protesters. And as we pushed to confirm who he was and authenticate the video, we were the first to learn and report that he was actually a protester. We also got and ran the first interview with him. So we maintained a proper journalistic skepticism and diligence throughout the process.

Besides, this is still a good and telling story about the current San Francisco moment. First of all, in the long and proud history of political theater in San Francisco, this is a great video. Sure, in retrospect, perhaps his comments were a little over the top, but they resonated because they seemed to represent a persistent attitude among some who want to let market forces determine who gets to live here.

“This is a city for the right people who can afford it, and if you can’t afford it, it’s time for you to leave,” Alper said, a comment that echoes posts regularly made on the Guardian website in reaction to our coverage of gentrification, eviction, and displacement issues.

As a protest tactic, I think this stunt is open to interpretation about whether it helps or hurts a housing rights movement that has caught populist fire in recent months, quickly altering this city’s political dynamics and making politicians scurry to address these issues.

But I think it does point to the need for San Franciscans to have a serious public conversation about who we are, what we value,  and where we’re headed, as we’re calling for our house editorial this week. And because print deadlines are immutable compared to the online world, I’d better turn my attention back to the paper now, thanks for reading.