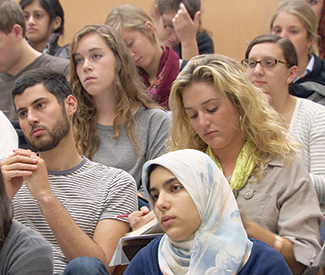 FILM At Berkeley, the latest documentary from the great Frederick Wiseman, runs 244 minutes — a time commitment intimidating enough to deter any casual viewer. But viewers intrigued by Wiseman’s long tradition of filming institutions (a small sampling: 1968’s High School; 1973’s Juvenile Court; 1985’s Racetrack; 2011’s Crazy Horse — the latter about a Parisian nude-dancing establishment) with fly-on-the-wall curiosity will want to carve out an afternoon for At Berkeley, as will those interested in 21st century educational issues, California’s financial crisis, and the care and maintenance of UC Berkeley’s free-spirited image, among other topics.

UC Berkeley students and grads also seem like a built-in audience, which means the film’s local screenings are likely to be more populated than they would be elsewhere. Folks who attended while Wiseman was filming (he shot 250 hours of footage over 12 weeks in what appears to be mid- to late-2011) might even catch a glimpse of themselves in crowd scenes and shots of casual moments on campus, which comprise the smallest portion of At Berkeley‘s divided interests. But the local-color moments do much to flesh out what’s not seen in the classroom and administrative-meeting sequences: the fading-hippie glow of Telegraph Avenue; two men with impressive yo-yo skills; a student tussling with his bicycle; a couple napping on a grassy expanse.

We’re also shown what goes into the maintenance of that postcard-perfect campus. Berkeley’s landscaping starts looking especially impressive when — during a retreat of school bigwigs that Wiseman had apparent free rein to shoot — one administrator points out that budget cuts mean the school employs just one person to mow all of its lawns. “Well, he’s doing a good job!” interjects Robert J. Birgeneau, chancellor of the school 2004-2013. At the time of filming, UC Berkeley was weathering a series of painful fee increases, staff furloughs and layoffs, and widespread budget cutbacks, with Birgeneau serving as its pragmatic, stern-yet-sympathetic eye of the storm.

Birgeneau, like everyone else in the film (including probably the most recognizable figure: former Clinton cabinet member Robert Reich, now a Berkeley prof), is never identified by name. At first, this feels disorienting; most docs strive to hook the viewer with first-act exposition, but At Berkeley simply plunges in with a woman (a teacher? a student?) regaling (a class? an extracurricular club?) with a myth about Berkeley’s origins (spoiler alert: it wasn’t founded by gamblers) that leads into a broader rumination on what the school represents. “A sense of imagination, of diversity,” she says. “An ideal.”

Before long, it’s obvious that we don’t need to know the back stories of everyone who appears in the film. This portrait of UC Berkeley — as a complex place, not without unrest, but also not without spontaneous a capella performances — emerges with all of its subjects sharing equal footing, their experiences and points of view presented with equal interest. Some of the most compelling scenes take place in classrooms, with remarkably articulate students (though, yes, Wiseman’s camera does catch a few looking sleepy and bored) discussing subjects as wildly diverse as poverty in America, advancements in robotics, Thoreau, and racism. There are also fascinating snippets of lectures, including an amusing, anecdote-heavy treatise from Reich on the importance of self-evaluation.

“The film has to work on both a literal level and a metaphoric, or abstract, level,” Wiseman writes in his At Berkeley director’s note. Filmgoers grasping for a through line will pick up on the financial stress that permeates every corner of the school. A student who describes herself as middle-class weeps at the financial burden she’s imposing on her parents. A professor advises a pair of eager students that their engineering dreams will require raising funds from government entities. Another professor expresses her concerns that increasing student fees will encourage new grads to seek out big paychecks to pay off their debts, rather than lower-paying jobs that might be more socially conscious.

The unrest percolating throughout the film culminates in coverage of a late-2011 Occupy Cal demonstration, in which the main campus library is overtaken by passionate protestors. The focus shifts away from the chanting students to UC Berkeley’s behind-the-scenes response, or rather, the phone calls and meetings that decide what the response should be (a “generic acknowledgement” is met by jeers from the protestors; a heavy police presence is suggested, but not visually documented).

In the library, a young man grasps the bullhorn and advises his fellow students that they need to organize their guiding principles more efficiently — an observation echoed later by Birgeneau. Unlike the headline-grabbing demonstrations that fill UC Berkeley’s storied past — its rabble-rousing legacy gets surprisingly few mentions here — there’s no underlying philosophy, he points out. A few moments later, we’re in a classroom, listening to students grumble about how the protests disrupted their midterms.

As its fourth hour draws to a close, At Berkeley‘s final sequence leaps from a discussion of one of John Donne’s sexier poems into a science class discussing interplanetary space travel. Sure, it’s possible, the affably geeky instructor says — but the practical concerns (like building a vessel with incredibly robust power sources that could sustain life for generations upon generations) tend to get in the way of one’s brilliant ideas and imagination. Here Wiseman’s affection for metaphor is made abundantly clear. *