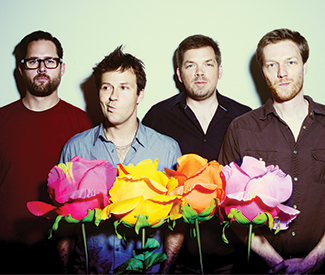 MUSIC Fans of the Dismemberment Plan may have found initial listens to Uncanney Valley (Partisan Records), the group’s new post-breakup album and first original material in a dozen years, a little jarring. For a band that built its reputation upon jittery post-punk freakouts and raw, cathartic lyrical output, the more streamlined approach could take a little getting used to.

But from the nervous angst of 1999’s Emergency & I, to the more somber and reflective comedown of 2001’s Change, the four-piece has always managed to hold a mirror to the time and place its members were in at the time. Now, they’re in (or approaching) their 40s, and are spread all over the East Coast with marriages and full-time jobs occupying their time. The new material is a flawed but ultimately rewarding reflection of the Dismemberment Plan, now.

Formed in 1993 and steeped in the Washington, DC post-hardcore and art-punk traditions of bands like Fugazi and Jawbox, the Dismemberment Plan’s success came slowly but surely over the following decade. The band’s signatures — including its inventive rhythm section (propelled by the manic drumming of Joe Easley), injection of synthesizers, and erratically sharp vocals of frontperson Travis Morrison — came into perfect alignment on Emergency & I, one of the finest indie rock albums of the 1990s. When the band called it quits soon after touring to support its follow-up, Change, it all felt a little premature — though there certainly weren’t any expectations by fans or the band itself for an eventual reunion. That all changed in 2010, when the group got back together for a brief tour to commemorate Barsuk Record’s reissue of Emergency & I.

Though the band had previously reunited for a couple of one-off shows in 2007, something about the lead-up and aftermath of this tour was different.

“In rehearsals we started jamming more and more, and we really liked what we were coming up with,” Morrison said. “That led us to continue getting together to play when we didn’t have any shows booked, where we’d have to be rehearsing old songs, making sure we know them and stuff like that. So that was the impetus.”

That this led not only to more touring, but also to an album full of new material was extra surprising, considering Morrison, after a couple of post-Plan solo albums, claimed to have “retired” from music in 2009. With a move to New York City, a full-time gig at the Huffington Post, the co-founding of a music start-up (called Shoutabl), and a marriage all coming within the past five or so years, some time off from music definitely made sense, though Morrison has obviously since backed off of the finality that retirement represents.

For all of its shimmery pop leanings and at times perhaps overly-comfortable grooves, Uncanney Valley isn’t without many of the strengths and idiosyncrasies that make the Dismemberment Plan the Dismemberment Plan. Synths are expertly layered throughout, Easley’s drumming and Eric Axelson’s bass playing are as locked in as ever, and Morrison can still surprise you with odd little one-liners that wind up rattling around in your head for days. Lyrically, the album is all over the map and ventures into a lot of uncharted territory for the band: the sacrifices of fatherhood (“Daddy Was A Real Good Dancer”); the comfort found in long-term, post-infatuation relationships (“Lookin'”); the anxiety and loneliness of moving to a new city (“Invisible”). This is grown-up shit, being explored admirably. Still, you have to wonder how this will juxtapose in a live setting with all the older material, which feels like a lifetime away from where the band is now. Morrison for one, isn’t worried.

“There aren’t too many of our older songs that are solely based on adolescence or adolescent issues,” he said. “There are very few songs where we accused someone of not understanding us, which is a very young thing to do. I think there’s a lot of philosophical distance or perspective, where when I sing those songs now, I think, ‘Wow, we must have been little old men when we were like 23.’ The fact that there aren’t many accusatory songs makes it easier to convey the older stuff now at 40 years old.”

Whether Uncanney Valley represents an official final chapter in the Dismemberment Plan’s career or the first in a series of new band happenings remains to be seen. The group is taking it all one day at a time, and Morrison certainly wouldn’t want it any other way.

“Someone told me once that Bill Murray tells everyone that he’s retired, but then just comes out of retirement whenever there’s something exciting or interesting to do and I really like that attitude,” he said. “So whatever Bill Murray does, I do.” *