Home Mantra from the Milk/Moscone memorial march: "Fight back!" 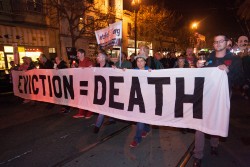 Hundreds of activists and progressive San Franciscans marked the 35th anniversary of the Mayor George Moscone and Sup. Harvey Milk assassinations on Wednesday night in the Castro with fiery speeches urging the crowd to “fight back!” against displacement and gentrification, conjuring the words and spirit of those slain leftist leaders.

“Gotta have hope just to stay alive,” the San Francisco Gay Men’s Chorus sang of Milk and his message on the 35th anniversary of that chorus’ first performance, on the steps of City Hall on the day of the tragedy, belting out the refrain, “Gotta give ‘em hope.”

Despite the onslaught of evictions triggered by real estate speculators and the city’s current economic development policies, such as the tens of millions of dollars in tax breaks extended to Twitter alone, the defiant message from this podium did have an undercurrent of hope.

But that hope was predicated on people’s willingness to organize and engage in “a fight they started,” Tom Temprano, president of the Harvey Milk LGBT Democratic Club, said of Milk and Moscone, “a fight against gentrification and displacement.”

Temprano then played an old news clip of Milk talking about his own eviction from the camera store and apartment where he lived on Castro Street, the result of similar economic forces that are overtaking the city today.

Milk explained how San Francisco’s economy relies on local residents being able to earn a living wage and not pay too much of their incomes in rents. But when landlords gouge their tenants, they have less to spend in local businesses, “and sooner or later, that’s going to crunch the economy locally.”

He cited the recent successes of that movement, from suing to stop CitiApartments from abusing and exploiting its tenants to stopping the 8 Washington luxury condo project when the voters overwhelmingly defeated Props. B&C this month.

Housing activist Tony Robles, a board member of the Manilatown Heritage Foundation, recalled being a student at Mission High School when the news of the assassinations was announced, an event that profoundly affected him. He said they represented “the spirit of community and the spirit of fighting for what is right.”

Robles called out Sup. Scott Wiener, a Milk successor representing the Castro, calling Wiener unworthy of that legacy, citing Wiener’s legislation allowing more apartments to be converted to condos and with closing the parks at night. “You were no Harvey Milk when you made that move, brother,” Robles said, closing with this hope: “Let the poetry of Harvey Milk’s struggle live on in the streets of San Francisco.”

Wiener and other politicians, including Mayor Ed Lee, Sen. Mark Leno, Board President David Chiu, and state Democratic Party head John Burton, spoke earlier in the day at a City Hall memorial. But they pointedly weren’t invited to the more raucous evening event (although Sup. David Campos, whose Assembly race against Chiu the Milk Club has endorsed, did show up to offer his silent support).

“Fuck you, we are staying!” was the message Shannell Williams, a San Francisco native and a rising young activist who came from the Save City College movement, had for city’s landlords and those who say low and middle income earners should just move to Oakland.

She and others recalled the message of love and inclusion that were hallmarks of Milk and Moscone’s political philosophy, as well as their belief in building coalitions to defeat powerful economic interests.

Tommi Avicolli Mecca of the SF Housing Rights Committee cited recent successes the movement has had in fighting back against evictions and said, “It’s because of the power we have as tenants when we unite and we fight back.”

He said that was Milk’s central message: “If we unite and fight, we can win.” And Mecca said San Francisco “doesn’t belong to greedy landlords, it belongs to all of us.”

Cleve Jones, an longtime LGBT activist who was an intern for Milk at the time of the assassinations, noted that, “There are some who will question our desire to raise political points tonight,” recognizing this occasion has usually been a solemn memorial march.

But he said that using this occasion as a vehicle for political organizing is the best way to honor the legacy of Milk and Moscone, who Jones said would be appalled by what’s happening in this city. Jones told the story of an aging gay activist who was recently depressed about being displaced from the city, and Jones tried to comfort him by saying, “It’s hard to get old in this town and see all the changes.”

“It’s not rhetoric and it’s not hyperbole. This destroys lives,” Jones said. It was a message repeated on a large banner carried by those leading the march to City Hall, which read, “Eviction=Death.”

The rally was closed out by members of the Sisters of Perpetual Indulgence, who cited a long list of “weird, kooky artistic innovators” from San Francisco’s past, and said that, “They never could have afforded to live here today.”

Then the Sisters offered an invocation they called the “Rosary of Housing Evils,” asking the crowd to repeat the mantra “Save us from the speculators” between each of their prayers and observations for the city, which included:

“Harvey Milk was evicted from his home.”

“Extend rent control to all residential and commercial units.”

“Rent has risen 21 percent this year.”

“We all need to stay together or they’ll pick us off one by one.”