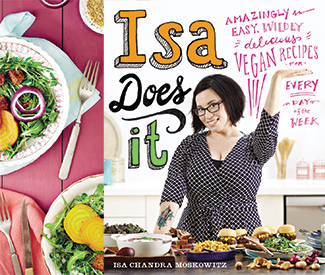 LIT The first thing you need to know about Isa Chandra Moskowitz is that she’s a punky legend in the global vegan community. She started the DIY Post Punk Kitchen public access show in Brooklyn and (perhaps more importantly) created the vegan hub website of the same name exactly 10 years ago. While maintaining PPK she has authored or co-authored eight popular cookbooks, right up to this fall’s unfussy workday vegan cookbook, Isa Does It: Amazingly Easy, Wildly Delicious Vegan Recipes for Every Day of the Week (Little Brown, 320 pp., $30).

The second thing you need to know is that many people mispronounce her name (it’s “EE-sah” not “EYE -sah”), though it doesn’t seem to bother her much. I find myself profusely apologizing for flubbing her name when she picks up the phone — especially since I’ve been following her work, and making her delicious dishes, for the better part of a decade. I should know better.

From a hotel room in Minneapolis while on her book tour, the soft-spoken Omaha-based chef shrugs off the faux pas and we quickly get to work pinpointing her favorite recipes from Isa Does It: anything that’s creamy cashew cheese-based like the alfredo and the mac’n’cheese, along with a kale-lentil-quinoa stew, which she describes as the “classic vegan recipe” that she makes herself more than once a week, mixing up the spices as she goes.

She spouts an important note about preparation, something which is thoroughly dissected in the early sections of Isa Does It, with tofu butchery, and handy pantry tips for making cooking after work more streamlined: “I always have kale in the fridge; I always have lentils and quinoa in the pantry.”

There are also the recipes from Isa Does It that are featured in her newest video series, Make It Vegan, which has Moskowitz whipping up the Meaty Bean Chili and Cornbread, and the Nirvana Enchilada Casserole (“I like a lot of onions in this, and a lot of jalapeno; a lot of everything, really”) to the tune of “Salt” by Kelley Deal. The casserole is part of the “Sunday Night Supper” section of the book — a few more ambitious recipes, like many from her previous cookbooks such as Veganomicon (a must-have for any vegan), Appetite for Reduction, or Vegan Brunch.

That enchilada casserole is next on my list of Isa Does It dishes to tackle. I’ve so far tried the flavorful Tempeh Giardino, Kale Salad with Butternut Squash and Lentils, and the Cast Iron Stir-Fry With Avocado, Basil & Peanuts, which is a light yet super filling weekday stir fry. The avocado really gives it a fresh kick. I’m also now officially obsessed with cashew cheese, and have cashews soaking at all times, just like the author.

Moskowitz has been working on this particular cookbook for the past two years, concocting recipes in her Omaha home — the Brooklyn native moved there three years ago, mainly because she wanted a garden but also thanks to the local music scene. Her inspirations come from her pantry — “I have Brussels sprouts and sweet potatoes, what can I make with that? — and sometimes she’s inspired to veganize something she saw on the Food Network. “Like, there might be some secret Guy Fieri recipes in there that I veganized.”

Like her previous cookbooks, each of the recipes went through rigorous testing. “I have like, 30 testers. One of the biggest things for people was ‘would you make this on a week night?'” Moskowitz explains. She asks each tester to make the meal and answers a series of questions. For this particular book, she wanted everything to be accessible as possible, so another important question was: Were any of the ingredients hard to find?

“I live in Omaha now — I’m in the middle of the country — and that really changed my views on what people have access to. So I just wanted it to be really accessible ingredients,” she says. “Another reason I wanted to write this book is because I was cooking more than ever because there were not that many places to go out to eat.”

It’s another world away from Brooklyn, where meat-free restaurants and offerings dot the streets, and markets have aisles full of items clearly marked “vegan.”

While there are meat-and-dairy free offerings at local sushi spots and coffee shops (and Whole Foods Markets) there’s no dedicated vegan restaurant in Omaha — yet.

When we spoke, Moskowitz had recently been handed the keys to her first restaurant, which will open in spring 2014. Attached to a bar owned by the members of Saddle Creek band Cursive, Moskowitz’s spot will serve a revolving menu of vegan comfort foods, all made from scratch. “All the mayo is from scratch, I’m going to make my own cheese, [there will] even be house-made sodas, and kombucha on tap.”

Although there have been some rumblings about Moskowitz’s restaurant for some time, she gives the Guardian an exclusive: The name of her new restaurant will be Modern Love.