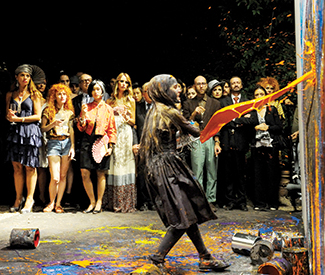 FILM Paolo Sorrentino has only been directing features for 12 years, so perhaps it’s premature to expect a masterpiece from him — although he probably doesn’t think so. Amid generally tepid post-millennium Italian cinema, he’s been consistently ambitious and bold, from 2001’s One Man Up onward. That facility has won a lot of acclaim (most notably for 2008’s Il Divo), but also attracted a certain amount of skepticism: Is he more style than substance? What does he have to say?

The Great Beauty, aka La Grande Bellezza, arrives as a high-profile contender for the Best Foreign Language Film Oscar, already anointed a masterpiece in some quarters, and duly announcing itself as such in nearly every grandiose, aesthetically engorged moment. Yes, it seems to say, you are in the presence of this auteur’s masterpiece. But it’s somebody else’s, too. The problem isn’t just that Fellini got there first, but that there’s room for doubt whether Sorrentino’s homage actually builds on or simply imitates its model.

La Dolce Vita (1960) and 8 1/2 (1963) are themselves swaying, jerry-built monuments, exhilaratingly messy and debatably profound rather than “perfect” works of art. But nothing quite like them had been seen before, and they did define a time of cultural upheaval — when traditional ways of life were being plowed under by a loud, moneyed, heedless modernity that for a while chose Rome as its global capital. The mood there was giddy and alienating, magnetizing celebrities (especially as the Italian film industry found itself hosting myriad international productions), virtually creating “paparazzi” — a term introduced in 1960 by Fellini to describe the ambushing photographers buzzing like flies around movie stars and pop idols.

The films were so striking and influential that even (or most of all) Fellini himself couldn’t escape them. For the most part his later works were increasingly pale imitations, risking self-parody even as other artists waxed “Fellini-esque” on their own terms.

Sorrentino announces his intention to out-Fellini Fellini in an opening sequence so strenuously flamboyant it’s like a never-ending pirouette performed by a prima dancer with a hernia. There’s statuary, a women’s choral ensemble, an on-screen audience applauding the director’s baffled muse Toni Servillo, standing in for Marcello Mastroianni — all this and more in manic tracking shots and frantic intercutting, as if sheer speed alone could supply contemporary relevancy. Eventually The Great Beauty calms down a bit, but still its reason for being remains vague behind the heavy curtain of “style.”

Servillo’s dapper Jep Gambardella is turning 65, a never-married playboy who once wrote a well-regarded novel, then ever since has done nothing but interview other famous people and stay at the center of the Eternal City’s uppermost social whirl. Somehow he’s remained rich and famous himself, bearing the bored-with-it-all air that precludes discussion of what (if anything) he ever did to become either. He’s still invited everywhere, still occasionally beds the requisite younger women attracted by power. But it’s all getting old — not that Jep seems like someone to whom it was ever new, or who’d be able to find fulfillment elsewhere now that he’s drunk his fill of privileged excess.

As if to externalize the emptiness he feels, Beauty‘s Rome is all exquisitely framed but (aside from several lavish-party set pieces) underpopulated elegant rooms and grand exteriors. Has he simply forgotten the city’s teeming everyday life, or has Sorrentino? The supporting cast of available (albeit troubled) women, backbiting colleagues, and miscellaneous grotesques are right out of the Fellini handbook of “fabulous” faces. Yet when Jep (let alone the director) was coming of age, the “dolce vita” had already ended, degenerating into the political chaos of the 1970s, the tacky coke binges of the ’80s, then the crass, tawdry conspicuous consumption of Berlusconi and company — a decadence no longer divine but merely depressing. So why does this hangdog-faced protagonist’s world seem so little changed from the ones Mastroianni inhabited half a century ago?

Even the “shocking” novelties Jep is unimpressed by feel old-hat: a child artist whose violent tantrums create Pollock-like action paintings; a Marina Abramovic-type performance artist who solemnly bangs her head against a pillar for suitably worshipful patrons. We grok his superiority to such nonsense, but just what does he have to offer that’s any better? In a notably cruel sequence, Jep demolishes the pride of a prolific, idealistic female writer, calling her a fraud in both private life (she’s married to a closeted homosexual) and artistic endeavors (she’s acclaimed only by fellow Communist Party sympathizers). His smug satisfaction in doing so seems to be shared by the film itself. Yet when the film finally gets around to offering up what Jep can grasp as a core redemptive truth, it’s ye olden mother/whore equation: a sequence cutting between a 104-year-old Mother Teresa-like “modern saint” crawling up a staircase to a Madonna painting, and a flashback to the moment when his first love exposed her boobs to Young Jep. Seriously, 142 minutes of pretentious bravado leads to that?

Servillo is a chameleon, far more than Mastroianni was, but the latter had a soulfulness both contemporary actor and film sorely lack. (Admittedly, some of the latter’s layers may be inaccessible for foreign viewers, just as the equally over-amped but more focused Il Divo required familiarity with the never-ending scandalousness of Italy’s political circus to be fully grasped.) As for Sorrentino, he’s such a natural filmmaker on the surface that at times even the most skeptical will be seduced into The Great Beauty‘s sweeping gestures. But for all their panache, it’s reasonable to worry the movie’s “statement” may be no more than (to quote Jep’s favorite all-purpose dismissal) “Blah, blah, blah.” *