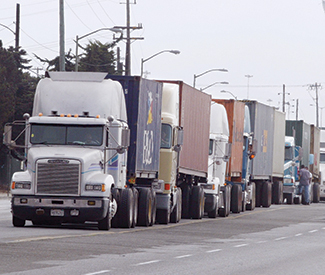 As a kid, Turcilo Caldera would climb into his father’s big rig and accompany him on runs to the Port of Oakland. “He would sit me on his lap and show me how to drive,” he remembered.

Originally from Nicaragua, Caldera came to California at age 5 and grew up in San Francisco’s Excelsior District. Now 30, he too is a trucker.

Speaking by phone around 8:30pm on a recent Friday, on his way to Stockton to drop off a shipment, he recounted how he’d arrived at the port at 5am and waited in line until 8:30am, only to move to a different line to pick up a load. “I ended up leaving the terminal around 10,” he said. That’s when he started getting paid.

Companies pay by the load, regardless of the time it takes to wait in line. Caldera works 12 to 13 hours a day.

He recently became a member of the Port of Oakland Truckers Association. It’s not a union, since truckers are classified as owner-operators rather than employees of the companies that hire them. Nevertheless POTA, which represents several hundred owner-operators, reflects the truckers’ attempt to ban together for better working conditions.

Truckers never know what they’re hauling, but it’s safe to assume that major retailers — Walmart, IKEA — are expecting shipments in advance of a holiday shopping blitz. While some companies anticipate a bump in profits, POTA and hundreds of other port truckers are facing potential job loss come New Year’s Day.

At a Nov. 22 meeting, POTA membership voted unanimously to begin a work stoppage at the port, starting Wednesday (11/27). “We don’t want to stop working, we need to make a living,” said Roberto Ruiz, a POTA member. “But this is the only thing they respond to.”

On Jan. 1, 2014, when new clean air regulations go into effect, hundreds of independent truck drivers will lose work as their vehicles fall out of compliance. They can’t afford to pay out of pocket for trucks that are compliant with new emission control regulations. Many face a tough time getting loans, and those who have dodged the bullet by securing a loan now find themselves in a worse financial crunch than before.

Many could be forced out of jobs completely. By the Port’s estimates, around 80 percent of the roughly 6,000 registered to service the Port are set to be in compliance. POTA estimates 800 truckers could be impacted.

POTA’s vote to stop work followed a series of meetings with Oakland Mayor Jean Quan and Deputy Mayor Sandré Swanson, as well as representatives from the Port and the California Air Resources Board (CARB) to try and hash out a solution.

In meetings, POTA asked city officials and CARB to identify funding to help those in danger of job loss retrofit their vehicles to comply with the clean-air regulations. They also proposed some solutions: They want fees billed to shipping customers for the time truckers must spend waiting in line for the loads they haul, to help offset the cost of buying and maintaining compliant trucks.

The Jan. 1 ban on older trucks is part of a broader effort to alleviate air pollution in surrounding West Oakland, where cancer and asthma rates are abnormally high. The Port’s system of loading cargo shipments results in long lines idling for hours, leading to a chronic congestion problem that has fouled the air. Before the problem was addressed, “Ports were where old trucks went to die,” explained Isaac Kos-Read, a Port of Oakland spokesperson. “Old trucks were the worst polluters on the road.”

West Oakland, known for its iconic shipping cranes, has traditionally been a majority African American neighborhood with lower income levels than the surrounding Bay Area. The demographic is beginning to change as comparatively well-heeled newcomers settle in, but it was an economically disadvantaged community of color who disproportionately bore the brunt of harmful air pollution for decades. Switching to low-sulfur fuel for shipping vessels has helped the port make drastic reductions in air pollution, but harmful emissions linked to asthma are still emanating from truck tailpipes.

The rule change will lead to what is indisputably an environmental improvement. But that benefit doesn’t have to come with the tradeoff of job loss. State funding was made available in 2011 to help financially strapped truckers afford new rigs or retrofits — but the funding has now vanished, and truckers who are late in pursuing compliance are finding doors shut all the way around.

In December of 2011, the California Air Resources Board made $58 million available to the owners of 2,100 trucks across California “to replace their retrofitted trucks with newer trucks,” Karen Caesar, a CARB spokesperson, explained in an email. About 1,700 of those could legally service the Port of Oakland.

The funding came from a $4.5 billion set-aside created by Proposition 1B, a transportation bond approved by voters in 2006. The $58 million was available for truckers who had installed filters to comply with an earlier regulation limiting diesel particulates.

In theory, the funding was enough to award all 2,100 trucks more than $25,000 apiece. That’s an amount that Frank Adams, an organizer with POTA, told the Guardian would be adequate for affected truckers to get compliant without going underwater.

But that’s not what happened. “Applications for 970 trucks were received,” Caesar explained, bringing the total funding request to $24 million. But in the end, CARB awarded grants to just 359 trucks, disbursing $10 million. The rest of the money was reallocated to other air-quality improvement programs, Caesar said.

And since the remaining funding is now gone, neither the city of Oakland nor CARB has come up with any other answers for the truckers. “We’ve been meeting with them on a regular basis to see if there are other funding sources,” Kos-Read said. “We want to help all the truckers.” But the meetings clearly haven’t been productive, since POTA’s staging a work stoppage during the busiest shopping week of the year.

CARB officials emphasize that truckers can still take road work even after they’re banned from ports, but Caldera says it’s not that simple. “If my dad were to decide to run up and down California, he wouldn’t be home like he is now,” he said. Road work means being away from home for possibly long stretches, and it’s unclear whether enough of those jobs exist to make up for the port jobs that will be lost.

The truckers represent a predominantly immigrant workforce, with many native speakers of Chinese, Punjabi, and Spanish. “Most of the truckers don’t speak English, let alone write good English,” Adams said. He guesses that’s why some didn’t apply for CARB funding.

Yet CARB officials say they sent out materials in various languages and held outreach events. As for those now trying to stave off job loss, “It’s not as if this blindsided anybody,” Caesar said.

Truckers’ financial problems go deeper. Caldera estimates that fuel costs eat up around 40 percent of his earnings. There are insurance payments, registration fees, maintenance and other associated costs, all borne by the truckers and not the companies that hire them.

As it turns out, selling cheap Chinese goods to American consumers is rather lucrative. Delivering said goods by truck is not, even though it’s integral to the business.

Then there’s the restroom problem. A Port a Potty was recently installed near the Port entrance, Caldera said, but it’s only a partial solution. Truckers aren’t supposed to exit their vehicles while they’re waiting. “If you decide to go to the bathroom you have to leave your spot in line,” but that just means more unpaid time sitting in line. “So we have to carry bottles in here,” he said. “These are awful conditions. This is something that I imagine in a third world country where people have no rights.”

Now, with a work stoppage looming, the truckers could also wind up entangled in legal problems since they have no union and no authority to strike. “It’s a complicated and unclear legal situation that they’re in,” said attorney Dan Siegel, who is advising POTA. “Because they’re ‘owners,’ they’re not considered workers under labor laws … they are subject to punishment for anti-trust violations.”

On Nov. 21, POTA members visited the International Longshore and Warehouse Union seeking support. Clarence Thomas, speaking as a rank-and-filer of the ILWU Local 10, said union or no, the truckers deserve to be treated fairly.

“For many years, trade unionists have looked at those workers as having a sweatshop on wheels,” Thomas said. “We don’t want to see anyone at the Port being exploited.”