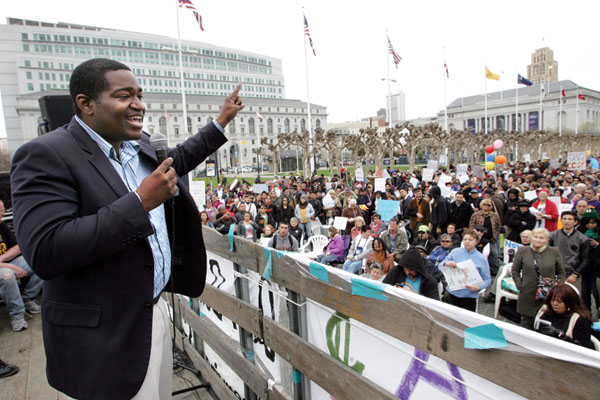 Democracy is a thing of the past at City College of San Francisco, and now one member of its elected board has had enough. City College Trustee Chris Jackson announced today that he is resigning from the college board to protest the state takeover of the school, and he explains his reasoning in an op-ed in this week’s Guardian.

“I came to City College to do good work,” Jackson told the Guardian. “At this point it’s impossible to do that work I set out to do. That’s why I’m leaving.”

Jackson was first elected to City College’s board in 2008, but in 2013 he was a trustee in name only. The day City College was told it would lose its accreditation was also the day it lost its Board of Trustees. Those democratically elected by San Francisco voters to lead City College were pushed aside by California Community College Chancellor Brice Harris.

It was a state takeover, and the board was rendered powerless.

The seven-member board holds no more meetings, drafts no more legislation, casts no more votes. The public cannot hold elected officials accountable when things go wrong — because the man in charge is no longer someone San Francisco elected.

Robert Agrella is the “super” trustee, appointed by the state chancellor to make unilateral decisions regarding City College’s future, something they say is necessary to save the school. Agrella holds no public comment sessions, and told the Guardian previously that personal emails to him would suffice. Agrella hardly ever answers his phone, we’ve found.

Paul Feist, a spokesperson for the California community college state chancellor’s office, said that the takeover was necessary to make the hard decisions needed to save City College quickly.

“Tremendous progress has been made since July, with key positions having been filled, collective bargains agreements reached and fiscal controls implemented,” Feist told the Guardian.

To Jackson, it’s a mockery of democracy.

“If my resignation can bring a light to this public policy issue, I hope it does,” he said.

In the last month a vote by the California Community College Board of Governors made Agrella’s stay indefinite. Legally, he won’t leave until the state tells him he has to.

“There is not a formal timeline for returning governance of CCSF to local trustees, but it is hoped that this happens soon after the college demonstrates it has addressed the deficiencies identified by [its accreditors],” Feist said. “The state has no interest in running City College indefinitely under a special trustee arrangement.”

To those who wonder what this all means, and to understand Jackson’s grievance, one look only as far as two of Agrella’s latest unilateral decisions.

A performing arts center long planned to be built by City College was canned by the super trustee, citing funding concerns.

“Clearly, the college is in no position to make this commitment at this time,” Agrella told the San Francisco Chronicle when he cancelled the project. It was $6 million shy of its estimated $95 million cost.

The school’s only performance venue is the Diego Rivera Theater. It is the lone theater serving a school of 85,000 students (and sometimes more) but it seats only hundreds, and is dilapidated and crumbling.

That was the first of Agrella’s motions to overturn decisions by the Board of Trustees, but his next decision was directly challenged by Trustee Chris Jackson.

Just last month the super trustee overturned a decision by the board to drop Wells Fargo as its bank. Last year, the board voted to find a more ethical bank to do business with, instead of one that foreclosed San Francisco homes and held questionable ties to the student loan industry.

An investigation by the San Francisco Examiner found that after Wells Fargo exerted pressure on Agrella and promised the school at least $500,000 in grants, the super trustee repealed the decision to shop for a new bank.

The unilateral decisions of Agrella make Jackson furious, but it’s not as if he didn’t see it coming.

In a September 2012 meeting, the Board of Trustees faced a decision: Does it ask the state for a special trustee? It was quickly communicated to the trustees that if they didn’t ask for one, one would be imposed anyway.

It was a false choice. A public relations move designed to make the board look like they sought help when newspapers and TV stations asked them about the super trustee. In the end, no matter what decision they made the state would take control of the school.

“This special trustee, while not ideal, I don’t personally like, I think it’s appropriate for right now. But we need to understand how long they’ll be there, and what position need to be in for them to leave,” Jackson said.

“I hope this board doesn’t just cede power to the special trustee,” he said.

That was a year ago. Now five months without the board, City College has lost the vision a local politician can bring.

“I’ve certainly called him the conscience of the board,” Alisa Messer, the faculty union president at the college, said of Jackson.

“Chris made himself accessible to those who felt besieged. He’s for the underdog, regardless of being black or brown,” former student trustee William Walker told us.

All of them mentioned Jackson’s work to secure childcare for the two City College campuses in the Bayview. When City College’s accreditors tasked them with scaling down its mission of who to serve, Jackson championed the college’s GED program and won. He also worked closely with the group Students Making a Change, which endeavors to close the achievement gap for students of color at City College.

Jackson’s departure leaves a seat open on the board which Mayor Ed Lee can make an appointment to fill. But the legality of an appointment while the board is effectively out of power is an open question. The Guardian contacted the mayor’s office to find an answer, but did not hear back from them before press time.

“I think the thing San Franciscans ought to be asking is: Do we even have a board, and when are we going to?” Messer said.

As for Jackson, he’s looking forward to concentrating on his family and his career. He currently works at a nonprofit which helps people in Africa and India find new jobs in tech.

The 30 year old Jackson said he wants to be an attorney to help young men like D’Paris Williams, who was stopped for a traffic citation at Valencia Gardens in a case of alleged racial profiling. Jackson, who lives in the Bayview, wants to defend the people in his community.

Update: Commenters and sources that called the Guardian rightly asked what Chris Jackson’s Ethics Commission fines had to do with his stepping down. Jackson was late filing his campaign reports and was fined about $3,000 by the commission. When the Guardian spoke to them a few months ago about this, they told us it was a routine matter and that Jackson was complying with their requests for payment. Jackson had already reached a payment agreement well before his resignation, which does not affect the fine, he said.