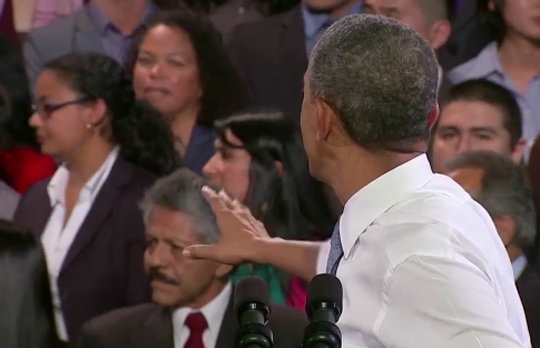 Ju Hong just wants to see his family for Thanksgiving, and that may be why he shouted down the president of the United States.

San Franciscans and politicos gathered in the Betty Ong Recreation Center to hear the president call on congress to pass new laws regulating immigration, something sorely needed, as Obama is widely known for deporting record numbers of immigrants. The Pew Research Center shows he’s deported more per year than George Bush ever did, with over 392,000 deported in 2011 alone, 80,000 more than Bush’s highest year.

Obama called for a greater focus on the plight of Asian immigrants, as most of the country’s discussion around deportations focuses on the southern border.

“It’s fitting we’re here in Chinatown just a few miles away from Angel Island,” Obama said. “In the early `1900’s about 300,000 people, maybe some of your ancestors, passed through on their way to a new life in America. For many it represented the end of a long and arduous journey.”

“Maybe I started out washing dishes, but my son can become mayor of San Francisco,” Obama said, to laughter. “If we stay true to this history, if we can cross that finish line, and go ahead and do what needs to be done, were going to grow that economy,” Obama said, and then was interrupted by Hong, shouting across the room.

Obama turned around and replied, “Actually I don’t.”

“Stop deportations!” Hong and his friends started to chant.

Likely to the Secret Service, Obama said “No no, don’t worry about it guys. These guys don’t need to go.” Then he spoke to Hong. “Let me finish. You can stay there. It won’t be as easy as just shouting, it requires lobbying and getting it done,” he said.

Outside the rec center, Hong said he felt that Obama’s speech had lots of flash but no substance.

Ju Hong interviewed by reporters outside of the Betty Ong Recreation Center.

“Families are still being torn apart,” he said. “I’m not satisfied at all. He said he didn’t want to violate the law, but he has the power to stop deportations.”

Hong, 24, is an Alameda resident from Korea who came to the United States when he was 11 years old. When his grandfather died back home, he was unable to pay his final respects. Now he wants to fly back to South Korea to see his family, but can’t risk not being able to return.

The fear of deportation has touched him in many ways. In 2010 his home was burglarized, he said, but his mother said not to call the police. She feared they would discover they were undocumented.

Hong was one of the students protesting Janet Napolitano’s appointment to head the University of California system, which we covered a few weeks ago (Undocumented and Unafraid, 11/12).