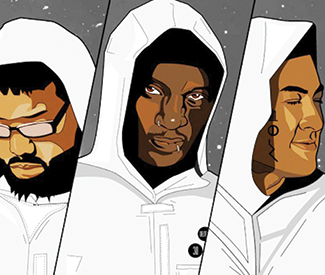 SUPER EGO All of a lately, my inbox has been flooded with so many bangin’ all-night underground party invites — real underground, not just some dude from Ibiza who doesn’t play Afromaus or whatever — that I’ve had to hike my virtual pants up to my gloriously toned calves. I look like a Williamsburg 2k7 thrift store hipster, minus the neon shutter shades. (Well, at least we’re not in clamdigger territory … yet.)

I don’t know what gives, but I like it. I haven’t seen so many undergrounds go off since the heyday of the Compound and Odyssey a few years back. Real estate prices, annoying neighbors, an overeager alcohol board, and too many bored police have always foiled a thriving underground scene in SF. Oakland has fared much better — and even there I’ve seen a recent uptick in quality basement throwdowns.

Good. No matter how nifty our big clubs and regular parties — and they’re pretty nifty — they can always use some competition as corrective, especially when they’ve become too bright, or too crowded, or wrong-crowded, or expensive, or not nearly loud or bass-heavy enough. And the parties themselves have been fantastic. I’ll always heart the kandi kids, but it’s nice to pack into an extralegal venue rocking some batshit techno and a friendly crowd — with no fear of losing an eye to any errant Glo-Sticks. Thanks, rave unicorn!

So perfect. Two of our legendary bass crews, the Indian-flavored Surya Dub and the Jamaican-rolled Dub Mission jamming together… at a pot club. One of the city’s sleekest and most innovative cannabis dispensaries, at that: SPARC, teaming up with Grown Kids Radio. With Kush Arora, Sep, J-Boogie, and Maneesh the Twister.

Hard to believe the guiding light of global electronic music, Cheb i Sabbah, is no longer with us, having passed away from cancer last week at the age of 66. But the music will always remain: This gala celebration, named for the party he put on for almost 20 years, will honor his contribution to the musical melting pot and bring the classic SF nightlife community out to honor Chebiji’s legacy. With more than 30 performers and Djs from around the world, including DJ Rekha, Dub Gabriel, Sep, Little John, Radiohiro, Jimmy Love, and Opium Sabbah.

Two Bay Area techno greats get together to rock Mighty’s sound system. Alland decamped for Berlin several years ago to run his successful Bad Animal imprint and Nikola, despite playing host to nearly every foreign DJ who blows through town, has been far too absent from the decks lately. Don’t sleep.

Oh hey, we’re throwing a party. The Bay Guardian that is. The latest in our series of evening soirees at the de Young Museum, this Friday evening happening pays homage to the new David Hockney exhibit by giving you a little retro-future zazz. DJs from neato Italo disco monthly Galaxy Radio shine like stars, with interdimensional face-painting, living statues, cool jewelry-making, and art, art, art (and cocktails).

Before you feast on that T-bird next week at your folks’, stuff your face with some bass and gravy, courtesy of the Bay’s notoriously lowdown Dirtybird family. With special guest Polish duo Catz ‘n Dogz, whom I adore.

Caught this young ‘un (DJing raves since 13) at Detroit’s Movement festival last year, when he was riding atop a bouncy castle of Latin-flavored tech-house hype. Skinny Cuban cutie turned it out with some smooth grooves.

Del the Funky Homosapien in the captain’s chair, Dan the Automator on navigation, and Kid Koala at the teleporter: This collab of Bay underground hip-hop and trip-hop greats, a tribute to the seminal Deltron 3030 project of the early 2000s, should be one cosmic mindtrip/blastoff. With a live orchestra, OK?