Home Albany Bulb squatters lose in court and turn to direct action to... 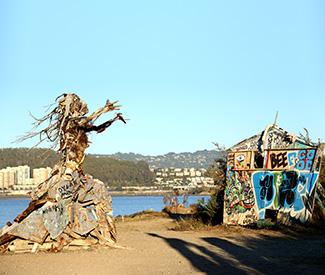 Yesterday marked a big day for Albany Bulb residents. The Bulb, a closed landfill turned homeless encampment, has been under the threat of eviction by the Albany City Council for the last month.

After an afternoon in a San Francisco courtroom, Judge Charles Breyer of the US District Court for the Northern District of California denied a stay away order filed by the residents’ attorneys seeking to prevent an imminent eviction by the City of Albany. Later that day, after an Alban City Council meeting, residents and activists marched to the Bulb and set up a permanent occupation in protest of the impending eviction.

The stay away order was filed last week in order to prevent eviction during the winter. Osha Neumann, one of the residents’ attorneys and a longtime artist whose work is represented at the Bulb, said that it was unusually cruel to make the residents, some with severe disabilities and mental health issues, move off the Bulb without any homeless shelters or temporary housing available in Albany.

“They haven’t said what is the urgency or need to do it in the middle of winter,” Neumann said of the city, “It’s nonsense.”

Albany Housing Advocates was also a plaintiff, along with 10 of the Bulb residents in the lawsuit.  Julie Winklestein, the president of the AHA was in the court audience, said she hoped that the stay away order would be given: “We decided for a temporary restraining order to keep the conversation going.”

And while that conversation was put to a halt, another has started.

According to a press release issued by area activists and Bulb residents sent early this morning, “activists say they will be participating in trainings, hosting workshops, and planning more actions targeting the City of Albany, as well as the Sierra Club and Citizens for East Shore Parks, recreationalist organizations that are sponsoring the eviction.”

Based on information obtained in court documents, $570,000 was allocated to remove the Bulb residents, based on an Albany City Council decision made on October 21, with $171,000 spent on the cleanup of the campsites and the remainder spent on two portable trailers with bunk beds to serve as transitional housing for six months.

Many of the campers, such as six-year resident Amber Lynn Whitson, believe that the transitional housing isn’t responsive enough for disabled people, as they believe it would not be open during the day.

“It’s ridiculous that they say they don’t know of any specific disabilities,” said Whitson about the city’s attempt provide transitional housing.

“If I’m not back there, I’m on the streets,” Kris Sullivan, an 18-month Bulb resident said about the encampment. “We’re safe back there.”