Home Bang with Friends buttons up, becomes DOWN 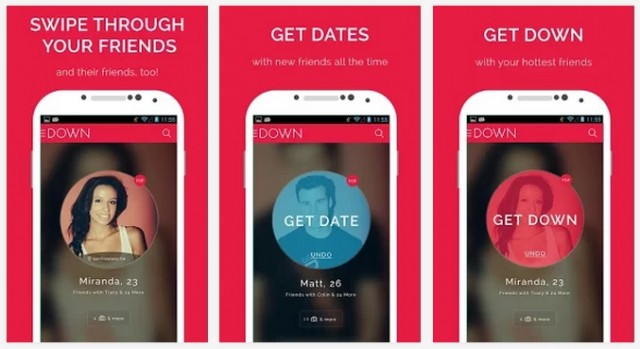 Even apps wanna play games with your heart — Bang with Friends has announced it will phase out its current, shameless name and make the switch to “DOWN,” a more “comfortable” brand that will provide shy lovers with the option to not only hump their homies, but ask them out on a clothed, probably awkward first date.

Bang with Friends is exactly as it sounds — use your phone to scan through Facebook friends and declare fuckable or not. If someone you like is pining after your parts, bam —the app sends an email and off to bed you go. Super straight-forward and ideal for making your social life dramatic and weird, the app seems to be faring well as is.

Colin Hodge, who coins himself the company’s Chief Bangin’ Officer, says the makeover plan began after users started requesting the option to hang beyond the hookup.
People want to date their friends, sure, but the world is over populated with Internet-wingmen.

Perhaps Bang with Friends users just weren’t getting their hands on the prize and needed a more first base-friendly approach. Playing nice might open some new doors, but this app is for spreading legs. Easily assumed that if someone downloads this app, they probably still want the date to end with an awkward, friend-entangled bang, of sorts.

DOWN’s press release also notes that the new name captures the way our generation dates, “without alienating people who may not want an app that says ‘bang’ but are totally down otherwise.”  Perhaps those with conservative lust should consider hiding the app icon in their utilities folder and focus on getting laid.

The SF Bay Guardian wrote Chief Hodge for some added insight into the name change and the app’s newest features.

Colin Hodge Banging is very much still in fashion and hopefully always will be.

SFBG So people were clamoring for less banging and more dating?

CH Perhaps not less banging, but people told us that there are certain friends who they consider boyfriend or girlfriend material and wanted to express that, versus jumping to the hookup.  We want to give people a way to be honest with their intentions, whatever they may be.

SFBG Now you can bang friends of friends. How do you ‘unlock’ these new lovers? Is there some sort of test/challenge/dance off?

CH We hold Sex Olympics at the BangPad every third Tuesday, with the winners unlocking ‘friends of friends’ along with a lifetime supply of DOWN condoms.

[Ed. note: SFBG really wishes this wasn’t a lie and a total tease because we would in fact WIN all the prizes and romps with all our bff’s bffs]

CH But really, you can unlock your friends of your friends by getting your favorite wingman or wingwoman to join you on DOWN.