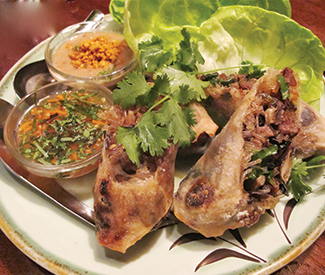 Do you know how damn lucky we are with all the restaurants that open in this city every year? It’s pretty amazeballs. Some are more interesting than others, granted, but this week we have three newbies that deserve a closer look. Go ahead, stare. Winking, also OK. After going through a trial run-soft opening, Nico (3228 Sacramento, SF. www.nicosf.com) has officially opened this week in Laurel Heights. The restaurant is from Nicolas and Andrea Delaroque. French-born Nicolas has quite the resume that includes Manresa, Atelier Crenn, and Coi, plus two casual spots, Le Garage in Sausalito and L’Appart in San Anselmo. The menu is contemporary Cal-French, and expect a full-on wine list to match. The space looks intimate and chic, like it would work really well for your next date night. (Just making suggestions.)

Russian Hill is where you’ll find another neighborhood restaurant. I can hear the residents cheering, options are slim over there. It’s called Stones Throw (1896 Hyde, SF. www.stonesthrowsf.com), and opened Nov. 5. Stones Throw’s team includes Michael Mina vets — like chef Jason Halverson—offering a Cal-American menu with appealing dishes like sunchoke soup with confit egg, green apple, and black walnut ($12), and chestnut ravioli with hen of the woods mushrooms, roasted Brussels sprouts, and truffle sauce ($22). Noice! Some folks from Fat Angel are partnering: you know the beer list will rock, and there’ll be a good selection of wines by the glass, too. The spot’s designed to feel comfortable, the kind of place you could swing by whenever.

And over in SoMa, the AQ team is opening its next spot with an abbreviated name, TBD Restaurant (1077 Mission, SF. www.tbdrestaurant.com). The vibe is very urban camping, with plenty of wood, taxidermy, and camping gear to make you experience the wilds of SoMa in a completely new way. The menu from chef Mark Liberman and sous Alex Phaneuf features ingredients that will either be cooked on the wood-fired grill, hearth, or rotisserie, so your vegetables may have been heated in embers, and that aged beef sirloin is definitely going to bear some grill marks. The beverage options include clever beer-based drinks for an extra outdoorsy kick.

You like home cooking? You know, deviled eggs, green bean casserole, smoked ribs, and fried chicken? Yeah, that’s the stuff. Chefs Spencer O’Meara and Sarah Buchard of S&S Shack are popping up again at Mission Rock Resort (817 Terry Francois, SF. www.missionrockresort.com) on Tue/12 at 6pm. Tickets are $45 for the full-on feast (but it doesn’t include tip or beverages). Get your ticket now at ss-shack.ticketleap.com.

So, Betelnut (2030 Union, SF. www.betelnutrestaurant.com) on Union Street has been famous for years for its Szechuan green beans and minced chicken lettuce cups. But the new chef, Mario Tolentino, has some new tricks up his long white coat sleeve. One item you’ll definitely want to order off the snacks menu is the char siu pork spring rolls, which will give most iterations in town a run for their money. I’m talking crazy good, deep, complex flavor inside these crisp little bundles of love.

The kitchen marinates boneless pork butt for 24 hours, and then cooks it for 50 minutes, constantly basting the pork to create an amazing candy-like exterior. The meat gets chopped up, and then some rice vermicelli noodles benefit from a bath in the drippings. Wood ear mushrooms, hon shimeji, Thai basil, and cilantro are also in the magic spring roll’s filling. You wrap that baby up in some lettuce, dunk it into the Malaysian-style peanut sauce (which features a hit of tamarind), and you can thank me later — go ahead and finish obliterating that plate o’ delicious that will only put you back $10.75.