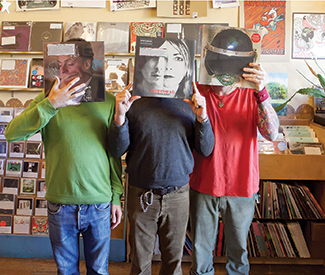 MUSIC To locals, Andee Connors is perhaps best known as the longtime co-owner of Aquarius Records, an independent record shop in the Mission. Aquarius, which specializes in obscure underground releases, is a landmark vinyl provider in SF that first opened its doors in 1970 to a group of stoners in the Castro, as the story goes.

Connors began working at aQ in 1994 (the shop by then long settled in the Mission), and became co-owner a decade ago. These days, he can still be seen behind the counter.

And yet, for math rock enthusiasts, Connors is recognized for a different music-related profession: He was the drummer and vocalist behind 1990s San Francisco rock band, A Minor Forest.

“Some people come in to the store and recognize me from A Minor Forest,” Connors says from his post in aQ. “It’s amazing when people in their early 20s tell me that they like the band. I’m like: ‘Holy crap, you were probably two years old when we were touring!'”

With noisy and jam-packed intricate time signatures and musical arrangements, A Minor Forest (AMF) stuck out in the Bay Area music scene years ago, taking on a post-rock sound in a community with a simplistic punk tradition. And on Sat/9, the band is reuniting to play its first show in 15 years — at Bottom of the Hill with Barn Owl, fellow labelmate of Chicago’s much-loved Thrill Jockey Records.

It all began in the early ’90s, when Connors left his home and school in San Diego to play music in the Bay Area. Shortly thereafter (’92), he teamed up with bassist John Trevor Benson and guitarist and fellow vocalist Erik Hoversten to “make the most difficult music possible.”

According to Connors, A Minor Forest took on a higher calling early on: making weird art and fucking with audiences as much as possible.

“A lot of our early shows were 45 minutes of nonstop repetition,” Connors says. “Over time, we drifted away from that and became less overtly annoying.”

Along the way, some people caught on to A Minor Forest’s “weird art project.” One such person: Legendary Nirvana producer Steve Albini, of Big Black and Shellac fame, who recorded AMF’s album Flemish Altruism (Constituent Parts 1993-1996) on Thrill Jockey in 1996.

With that, the band toured relentlessly and built a fanbase across the country, picking up friendly connections along the way.

“A lot of people I know now go back to my time in A Minor Forest,” says Connors. “When I look back on my life, it’s one of the coolest things I did.”

Though AMF hasn’t been active for the past 15 years, members Benson, Hoversten, and Connors have hosted their own musical projects. Currently, Connors lends his talents to four different bands: pop group Imperils, Ticwar, and Crappy Islands (respectively) with Benson from AMF and Common Eider, King Eider with Rob Fisk of early Deerhoof. Hoversten, meanwhile, was a touring guitarist for Pinback.

No matter what band he plays in, whether it be pop-punk or post-rock, Connors keeps it within a similarly complex, often calculated drumming style, whether he intends to or not.

“I think probably because of the bands I grew up listening to, and the era AMF was active, a lot of my drumming ended up being pretty mathy,” Connors says. “[It] became sort of permanently ingrained — and thus it seems like most bands I play with, I end up making them sound more mathy, whether I mean to or not.”

Weird time signatures, intricate arrangements, and long songs are a few of his favored sonic techniques. And Connors embraces math rock bands of yore like Polvo or Slint and newer bands that take on that same tradition.

“I loved math rock back in the day, and I still do,” Connors says. “I tend to dig bands that do whatever they do, pop, metal, whatever, in a way that’s…complex and weird. I also still dig that old ’90s style…and love the new bands that channel that sound.”

Although no longer active, AMF has long been embraced by enthusiasts of the fallen genre. So the question of the reunion remains: Why now? It goes back to A Minor Forest’s early supporters, Thrill Jockey, also known for releasing albums by bands such as Tortoise, the Sea and Cake, Wooden Shjips, and Barn Owl.

“We live in an era where many bands are reuniting, and though it’s great to hear that your favorite act is getting back together, I’ve been reluctant with the trend,” Connors says. “When Thrill Jockey expressed interest in reissuing our albums as a Record Store Day release recently, we thought that it would be weird and fun to play together again.”

And according to Connors, AMF will only be playing the finest and intriguingly named tunes like “…But the Pants Stay On” and “So Jesus Was at the Last Supper…”

“I know the frustration when an old band plays and is like ‘Hey we’re only going to play stuff from our new album!” Connors says. “We’re just sticking to the songs that people like and want to hear.”