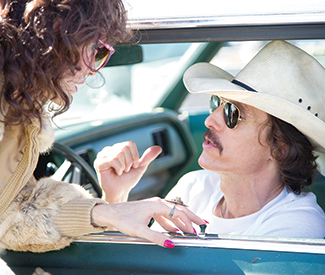 FILM Beware Canadians — they may walk softly, but they carry a big hockey stick. The country next door has always had a bigger influence on American life than generally thought, especially at the movies. Mary Pickford, the medium’s first superstar, was Canadian; so, a century later, are Ryans Gosling and Reynolds, Jim Carrey, Ellen Page, Rachel McAdams, and Seth Rogen. Canadians have directed a lot of seemingly very American films, from 1982’s Porky’s to this year’s Prisoners.

Now there’s Dallas Buyers Club, the first all-US feature (though not the first English-language one) from Jean-Marc Vallée. He first made a splash in 2005 with C.R.A.Z.Y., which seemed an archetype of the flashy, coming-of-age themed debut feature — even if, in fact, it took him 42 years and three prior features to get there.

Like fellow Quebecker Denis Villeneuve (of Prisoners and 2010’s Incendies), Vallée has evolved beyond flashiness, or maybe since C.R.A.Z.Y. he just hasn’t had a subject that seemed to call for it. Which is not to say Dallas is entirely sober — its characters partake from the gamut of altering substances, over-the-counter and otherwise. But this is a movie about AIDS, so the purely recreational good times must eventually crash to an end.

Which they do pretty quickly. We first meet Ron Woodroof (Matthew McConaughey) in 1986, when he’s living one kind of red-blooded American Dream: a Texas good ol’ boy working the rodeo circuit, chasing skirts, partying nonstop. Not feeling quite right, he visits a doctor, who informs him that he is HIV-positive and probably has no more than 30 days left on this mortal plane. His response is “I ain’t no faggot, motherfucker” — and increased partying that he barely survives.

Afterward, he pulls himself together enough to visit somewhere you suspect he’s seldom been before — the public library — and research his options. It appears the only significant treatment drug is AZT, which isn’t even on the market yet; it’s just being tested on patient groups he’d be lucky to be a part of. Being a born hustler disinterested in such formal roadblocks, Ron simply bribes a hospital attendant into raiding its trial supply for him. But Ron discovers the hard way what many first-generation AIDS patients did — that AZT is itself toxic, and in the high doses originally administered could cause much more harm than good to embattled immune systems.

He ends up in a Mexican clinic run by a disgraced American physician (Griffin Dunne) who doesn’t have to bother with the more stringent drug regulations up north, and in any case recommends a regime consisting mostly of vitamins and herbal treatments. Reasonably hale again after three months, Woodroof realizes a commercial opportunity here: He can smuggle such variably legal supplies in bulk to those who’ll pay any price for some hope back home in Texas. Yes, they’re mostly fay-guts. But a buck is a buck.

Finding he’s viewed with high suspicion peddling his wares to a plague-embattled gay community, he acquires as liaison and business partner Rayon (Jared Leto), a willowy cross-dresser in the Candy Darling mode who won’t tolerate his homophobia, but requires considerable tolerance for his/her non medicinal drug usage. When the authorities keep cracking down on their trade, savvy Ron takes a cue from gay activists in Manhattan and creates a law-evading “buyers club,” in which members pay monthly dues rather than paying directly for pharmaceutical goods.

It’s a tale that the scenarists (Craig Borten and Melisa Wallack) and director steep in deep Texan atmospherics (even if they had to shoot in Louisiana, presumably for tax-break purposes), like 2011’s memorable McConaughey-featuring true story Bernie. Largely through his friendship of necessity with Rayon (and his own shunning by old friends who gay-bait the second his health news gets out), the actor’s character here develops a certain broader-minded tolerance — a softening of prejudice that is the film’s major emotional arc. (There’s also a developing quasi-romance with Jennifer Garner as a sympathetic doc, but that feels somewhat gratuitous, partly because Garner is the kind of not-bad actress who nevertheless seldom brings authenticity to the table.) Much has been made of the extreme weight loss McConaughey and Leto undertook to play their roles. In Leto’s case, the transformation is impressive all around; in the McConaughey’s, he isn’t doing anything he hasn’t done variations on before, though it’s admirable how he refuses to make this protagonist any more charming than needed to get business done. We’re meant to buy that Woodroof eventually redeems himself in heart as well as deeds. But the line that rings truest is when he snaps “We’re not running a goddamn charity!” in turning down desperate HIV-positive men short on their subscription fees. Only self-preservation forces him out of his manly-man’s world of unsafe sex with shady ladies, among other high-risk behaviors. The therapies that save his own skin are shared with others (at least at first) only for the sake of the bottom line.

But then, plenty of innovators and benefactors of mankind have been cutthroat profiteers — look at Edison, for instance. While it takes itself seriously when and where it ought, Dallas Buyers Club is a movie by a Canadian whose frequent, entertaining jauntiness is based in that most American value of get-rich-quick entrepreneurship. *