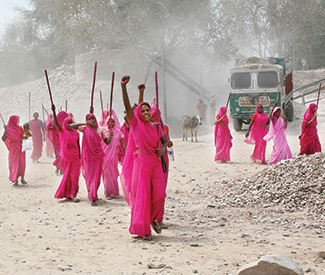 FILM Central India’s Gulabi Gang, composed of rural women fighting violence and oppression, has become a popular media subject, and it’s not hard to see why: Not only does it offer an inspiring story, it’s visually compelling, since its members dress in matching, hot-pink saris. Pink Saris, in fact, was the title of documentarian Kim Longinotto’s portrait of the group; it played in the 2011 San Francisco International Film Festival. Now, there’s Gulabi Gang, Nishtha Jain’s doc, which screens as part of the San Francisco International South Asian Film Festival, presented by 3rd i. (A Bollywood narrative, Gulaab Gang, is reportedly in production as well.)

Front and center in Jain’s film is formidable leader Sampat Pal, who speaks loudly and carries a big stick she’s perfectly willing to use. Though the Gulabi Gang’s trademark acts of physical retaliation are only discussed anecdotally, we do get to see the activists sharply criticize corrupt village leaders and dismissive cops. We also tag along as the women circulate among communities recruiting new members. The main plot thread follows Pal as she investigates a woman’s suspicious death — likely a murder, and one that’s being shoddily covered up by her husband and his family. (Later, it’s revealed that the wife was just 15 or 16, having been married off at age 11.)

Pal, who founded the group in 2006, is a skilled agitator, speaking for the voiceless and cannily grabbing whatever platform is available. “The video camera is recording it all,” she declares after visiting a crime scene that’s clearly been tampered with. “Your artistry will be shoved up your asses.”

But though Pal is backed up by fellow activists (Gulabi Gang notes that the group has some 150,000 members), Jain is careful to show that a happy ending is impossible amid an epidemic of violence against women. “Only God knows what happened,” the teen bride’s own father remarks with case-closed dismissiveness. Still, the women press on, and there’s hope to be found in their determination, and in the fact that there’s a trend of women’s rights docs coming out of India lately. Another, Invoking Justice — about women in southern India who’ve formed their own “Jamaat” to handle disputes traditionally settled by men according to Islamic Sharia law — screened at the Center for Asian American Media’s 2013 CAAMfest.

There’s a bit of feminist subtext to be found in Beyond All Boundaries, about India’s obsession with the sport of cricket. Er, ‘scuse me: “It’s not a sport — it’s a religion!” according to a first-act interviewee, hyperbole that starts to feel like fact once Boundaries gets rolling. Sushrut Jain’s doc, shot during the lead-up to the 2011 World Cup, follows three young people who’ve found their identities via cricket: homeless megafan Sudhir, who bicycles (sometimes for weeks) to every India match and coats himself with paint to become a living embodiment of team spirit; 12-year-old cricket prodigy Prithvi, whose skills are his golden ticket out of poverty, and (one hopes) a means to escape his sports-Svengali father; and Akshaya, an 18-year-old with a horrific home life who’s dropped out of school to pursue her dreams of playing professionally.

Reaching cricket’s elite level is no easy pursuit, even for a very talented boy — but for a girl, it’s nearly impossible. (Think of it this way: even in big-budget America, pro teams for women are pretty damn scarce.) And even if Akshaya makes it, whatever pay she earns will be laughably low; a coach interviewed in Boundaries is embarrassed to name the salary range on camera. But she has to try, since cricket is the only bright spot in what’s been a trying life. She seems so deserving that it’s hard to blame the filmmakers for stepping in and paying for medical care when an injury threatens an important try-out session.

Though Prithvi’s story contains some worrisome figures — the rich benefactor who’s funding the boy’s early career ominously notes, “If he doesn’t make it as a cricketer, that would be like a curse to me”; the youngster’s father, who jovially admits he “has to” hit his son from time to time — his future prospects seem brighter than Akshaya’s. Most uplifting is the tale of Sudhir, whose devotion to cricket makes him a misfit in his estranged family, but a hero to fellow supporters who admire his dedication.

Boundaries is more character piece than Cricket 101, but even if you don’t know its rules (seriously, why so many runs?), the language of sports fandom is universal. And in this case, it’s political: “Cricket was one way of showing the colonial rulers that we were your equal,” a sports journalist points out, and indeed the race to the World Cup finals, against long-standing rivals like Pakistan, makes for some highly charged matchups.

Elsewhere in the fest — which celebrates “100 Years of Indian Cinema” as well as offering a “Spotlight on Pakistan” — is a must-see for film history buffs: Celluloid Man, a nearly three-hour portrait of 80-year-old P.K. Nair, “the Henri Langolis of India” who founded the country’s National Film Archive. His is described as an “obsessive passion” (hey, for some it’s cricket, for some it’s film), and Shivendra Singh Dungarpur’s doc is an appropriately thorough, affectionate tribute, jammed with clips from movies Nair helped rescue and preserve. *