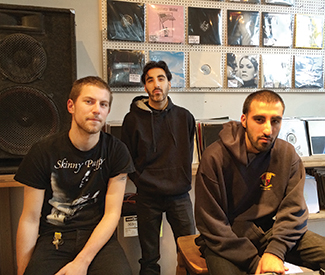 SUPER EGO A dream, a mirage, a miracle, or what? Am I not down off that pill? Deep in the Tenderloin, right where White Walls Gallery used to be… suddenly, there’s a full-on dance music record store, brimming with hundreds of vinyl gems. Pristine classics from Westbam, Frankie Bones, Masters at Work, and Jeff Mills up through smoking-off-the-press releases from L.I.E.S, Laether Strip, Delroy Edwards, even black metal act Raspberry Bulbs, because why the hell not — nothing’s real, right?

Oh, it’s real. It’s RS94109 (835 Larkin, SF. www.facebook.com/RS94109onlarkin), a decks-head fantasy run by super-sweet, early 20-something, East Bay-raised Afghani twin brothers Sohrab and Askander Harooni along with Oliver a.k.a. Vereker, whose noisy techno sets are making big club waves. All make their own tunes, and the store draws genuine inspiration from barebones, rough-and-tumble urban spots like Berlin’s recordloft, where Sohrab worked, and the fabled Submerge in Detroit, where they scored a lot of their records. In fact, RS94109 instantly put me back at the Detroit stores I grew up in, Record Time and Buy Rite.

“The digital age has lost a lot of its excitement,” Sohrab, who scoured the world buying collections for RS94109, told me. “We’re taking it back to local and hands-on, with a serious commitment to the neighborhood and the local scene” in the form of in-store events, co-presented parties, and more.

(Pro-tip: Go on a Sunday afternoon and hit up the Gangway bar next door for five-dollar Bloody Marys, crockpots of chicken adobo, and quite possibly a transgender beauty in a floor-length purple gown up on a bar stool lipsyncing “I’m Every Woman.”)

Along with the new Vinyl Dreams in Lower Haight and the new Rasputin in Upper Haight, the vinyl rebirth is gaining real momentum. Drop the needle and pinch me.

Young UK decks wiz takes over the As You Like It crew’s “Freaky Friday” party with absolutely fantastic Romanian techno player Cosmin TRG. Plus, in keeping with the latest retro craze, the loft at Public Works will be converted into a classic chill out room with Cubik and Origami. Nice.

Monthly disco and re-edit extravaganza Go Bang! is paying tribute to one of SF’s classic clubs — along with the old Trocadero Transfer and the original Stud (now Holy Cow) it forms a sort of holy triad of sacred gay dance floors. Relive the heady Hi-NRG discotheque days of yore with original I-Beam DJs Steve Fabus and Lester temple.

Honey Soundsystem’s weekly Sunday parties are no more, sad face. And while bets are still being taken on which of the 500 new Sunday club nights attempting to absorb Honey’s raucous-yet-whip-smart, gay-and-other crowd will succeed … well, bass-groove fanatic Robert Jeffrey’s Lyfe party, launching this week, is getting some Honey-type buzz.