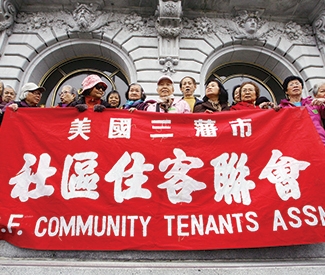 Tenant advocates have proposed a sweeping set of legislative proposals to address what they’re calling the “eviction epidemic” that has hit San Francisco, seeking to slow the rapid displacement of tenants by real estate speculators with changes to land use, building, rent control, and other city codes.

“In essence, it’s a comprehensive agenda to restrict the speculation on rental units,” Chinatown Community Development Center Policy Director Gen Fujioka told the Guardian. “We can’t directly regulate the Ellis Act [the state law allowing property owners to evict tenants and take their apartments off the rental market], but we’re asking the city to do everything but that.”

“San Francisco is falling into one of the deepest and most severe eviction crises in 40 years,” SFTU Director Ted Gullicksen said. “It is bad now and is going to get worse unless the city acts.”

The announcement came a day after the Lee family — an elderly couple on Social Security who care for their disabled daughter — was finally Ellis Act evicted from its longtime Chinatown home after headline-grabbing activism by CCDC and other groups had twice turned away deputies and persuaded the Mayor’s Office to intervene with the landlord.

But Mayor Ed Lee has been mum — his office ignored our repeated requests for comment — on the worsening eviction crisis, the tenant groups’ proposals, and the still-unresolved fate of the Lees, who are temporarily holed up in a hotel and still hoping to find permanent housing they can afford.

The package proposed by tenant advocates includes: require those converting rental units into tenancies-in-common to get a conditional use permit and bring the building into compliance with current codes (to discourage speculation and flipping buildings); regulate TIC agreements to discourage Ellis Act abuse; increase required payments to evicted tenants and improve city assistance to those displaced by eviction; require more reporting on the status of units cleared with the Ellis Act by their owners; investigate and prosecute Ellis Act fraud (units are often secretly re-rented at market rates after supposedly being removed from the market); increase inspections of construction on buildings with tenants (to prevent landlords from pressuring them to move); prohibit the demolition, mergers, or conversions of rental units that have been cleared of tenants using no-fault evictions in the last 10 years (Sup. John Avalos has already introduced this legislation).

“The evidence is clear. We are facing not only an eviction crisis but also a crisis associated with the loss of affordable rental housing across the city. Speculative investments in housing has resulted in the loss of thousands affordable apartments through conversions and demolitions. And the trend points to the situation becoming much worse,” the coalition wrote in a public statement proposing the reforms.

Evictions have reached their highest level since the height of the last dot-com boom in 1999-2000, with 1,934 evictions filed in San Francisco in fiscal year 2012-13, and the rate has picked up since then. The Sheriff’s Department sometimes does three evictions per day, last year carrying out 998 court-ordered evictions, Sheriff Ross Mirkarimi told us, arguing for an expansion of city services to the displaced.

At “Housing for Whom?” a community forum the Guardian hosted Oct. 23 in the LGBT Center, panelists and audience members talked about the urgent need to protect and expand affordable housing in the city. They say the current eviction epidemic is being compounded by buyouts, demolitions, and the failure of developers to build below-market-rate units.

“We’re bleeding affordable housing units now,” Fred Sherburn-Zimmer of Housing Right Committee said last night, noting the steadily declining percentage of housing in the city that is affordable to current city residents since rent control was approved by voters in 1979. “We took out more housing than we’ve built since then.”

Peter Cohen of the Council of Community Housing Organizations actually quantified the problem, citing studies showing that only 15 percent of San Franciscans can afford the rents and home prices of new housing units coming online. He said the housing isn’t being built for current city residents: “It’s a demand derived from a market calculation.”

Cohen said the city’s inclusionary housing laws that he helped write more than a decade ago were intended to encourage developers to actually build below-market-rate units in their projects, but almost all of them choose to pay the in-lieu fee instead, letting the city find ways to build the affordable housing and thereby delaying construction by years.

“It was not about writing checks,” Cohen said. “It was about building affordable units.”

Discussion at the forum began with a debate about the waterfront luxury condo project proposed for 8 Washington St., which either Props. B or C would allow the developer to build. Project opponent Jon Golinger squared off against proponent Tim Colen, who argued that the $11 million that the developer is contributing to the city’s affordable housing fund is an acceptable tradeoff.

But Sherburn-Zimmer said the developer should be held to a far higher standard given the obscene profits that he’ll be making from waterfront property that includes a city-owned seawall lot. “Public land needs to be used for the public good.”

Longtime progressive activist Ernestine Weiss sat in the front row during the forum, blasting Colen and his Prop. B as a deceptive land grab and arguing that San Francisco’s much ballyhooed rent control law was a loophole-ridden compromise that should be strengthened to prevent rents from jumping to market rate when a master tenant moves out, and to limit rent increases that exceed wage increases (rent can now rise 1.9 percent annually on rent controlled apartment).

Student activists recognize the familiar path from suspensions to the streets to prisons, and they took to the streets Oct. 22 to push the SFUSD to change its ways. Around 20 or so students and their mentors marched up to City Hall and into the Board of Education to demand a stop of suspensions over willful defiance.

They were dressed in graduation gowns of many colors, signs raised high. They smiled and danced and the mood was infectious. One driver drove by, honked and said “Yes, alright!” Assorted passersby of all ethnicities cheered on the group. The students were from 100% College Prep Institute, a Bayview tutoring and mentoring group founded in 1999 aiming to educate students of color in San Francisco. Their battle is a tough one. Though African American students make up only 10 percent of SFUSD students, they accounted for 46 percent of suspensions in 2012, according to SFUSD data. Latinos made up the next largest group, at 30 percent. (Joe Fitzgerald Rodriguez)

Techies to NSA: Stop spying on us!

Thousands of privacy and civil liberties activists, including many from the Bay Area, headed to Washington DC for an Oct. 26 rally calling for surveillance legislation reform, in response to National Security Agency spying programs. It was organized by more than 100 groups that have joined together as part of the Stop Watching Us coalition. The group has launched an online petition opposing NSA spying, and planned to deliver about 500,000 signatures to Congress. Many of the key drivers behind Stop Watching Us, from the Electronic Frontier Foundation to Mozilla, are based in San Francisco. (Rebecca Bowe)