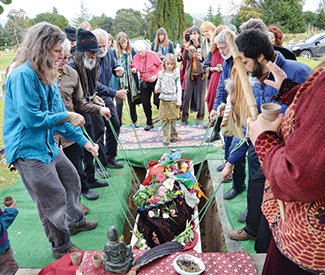 DEATH ISSUE Death is the Grim Reaper come to collect his dues, a silent, bewildered specter bound in black, this undeniable truth that we avoid at all costs. But it doesn’t have to be.

Beginning in Northern California, a growing movement has mounted an attack against death as we know it. They call themselves “death midwives.” Part ferry operator for the dying, part guardian of those left behind, these home funeral guides are committed to transforming our experience of death.

“Most people in this country have no exposure to death,” Jerrigrace Lyons, a prominent death midwife based in Sebastopol, tells us. “The references they do have are negative; it’s frightening, it’s ghoulish, it’s a failure. We need something realistic that shows death to be beautiful and graceful, with a lot of compassion and love and honoring involved.”

The most expensive party you never wanted to have, funerals in America have become a multibillion-dollar industry. Between the fees for completing the necessary paperwork, transporting the body, embalming, flowers, headstone, and casket, funerals cost an average of $7,000. (This is excluding the price of a cemetery plot, an 8 by 4-foot piece of real estate that can cost $5,000.) The services only take a few hours.

Nearly two decades and 350 corpses have taught her that there is nothing more important for a family than having time with the body to grieve. This is just one part of the death process that we have lost touch with.

“Death is such a sacred and holy thing, and we have commercialized it,” Heidi Boucher, a veteran death midwife in Sacramento, tells us. “The funeral industry has made it really mysterious and creepy, so people are afraid of death.”

Americans once took care of their dead in the privacy of their own homes. During the Civil War, embalming became popular as a way to preserve dead bodies. Meanwhile, more people were dying in hospitals, distancing the living from death.

When funeral directors established a monopoly on the legal right to embalm, we were separated even further from death. Today, most people have no idea what to do with a dead body. Even if they did, there are enough laws and restrictions around death to daunt almost anyone grieving over the loss of a loved one.

Paying someone thousands of dollars to deal with it no longer seems unreasonable. But handing our dead over to funeral homes might come at an even greater cost than we realize.

“When a body’s taken away, it’s taken out of the hands of the family,” Lyons explains. “There’s no direct care of the deceased, no personal involvement. There’s no way for the family to feel empowered by knowing that they’ve done everything they could to give their loved one a great send-off.”

Working as an ER and ICU nurse, Robin Russell saw a lot of death, but she was struck by how people feared death. No one wanted to talk about it, as if the word would summon the Angel of Death if said out loud.

Inspired by the open recognition of it with humor and color that she witnessed in Mexico during Dia de los Muertos, Russell began searching for a way to change how people understand death in this country. What she found was Lyons.

“I realized that one of the reasons we are so afraid of death is because it has been removed from us, by the body being taken away, filled with embalming fluids, made-up and dressed-up by strangers, and placed in a casket for a memorial conducted in an unfamiliar place, for an allotted period of time,” Russell says.

So she enrolled in Lyons’ death midwife certification program. As midwives offer care and support during and after births, death midwives give the same attention and guidance during and after deaths — from making sure that the dying are comfortable to counseling them about what is coming and helping them make arrangements.

When death comes, midwives turn their attention to the living, assisting the families and friends in caring for their loved ones at home. This can include helping them bathe and dress the deceased, preserving the bodies in dry ice, and completing all of the necessary paperwork to have a legal home funeral. With the aid of a death midwife, families can keep their dead at home with them for up to three days.

When Boucher first started working with the dying 30 years ago, she was one of few death midwives. But Americans have grown more environmentally and economically conscious in recent years, making home funerals increasingly appealing.

Death midwives offer funeral directors’ expertise at a fraction of the cost, sometimes for free. They advocate forgoing caskets in favor of cheaper, greener options like cardboard boxes or even just a shroud.

Expensive frills like elaborate flower arrangements and guest books are done away with, along with toxic ones like embalming. The movement is still very small — Boucher estimates that there are 100 death midwives in the US — but practitioners are optimistic about its future.

“Many people don’t know about this, but 99 percent of the ones I talk to who do are totally into it,” Boucher claims. “We just need to educate people. That’s the only way that anything’s going to change in this country in regards to how we perceive death.”

Lyons has taught 400 people and had 150 graduates from around the world since she started her death midwife certification program in 2000. In coming years, she foresees the home funeral movement growing as much as the birth midwife movement did in the ’60s.

“When the person’s kept at home for several days, it normalizes death a lot,” Lyons states. “The family is there, making everything beautiful and natural. There’s the comfort of the home, the privacy. And it isn’t just for the family. It’s also for the person in transition.”

When Carol Singler had a home funeral for her father in 2012, she swore she could feel his spirit there with them. Lyons had made things easier for Singler in every way that she could, guiding her through the process and even driving her downtown to drop off the necessary paperwork. Lyons recommended a cardboard box that people could decorate instead of a casket.

“When somebody dies, it feels like if you could give them something of your heart, then you would know everything was at peace. This gave us the opportunity to do that,” Singler remembers. “Decorating the box with paint and collages, putting all of our love into it for my dad, we had tremendous emotional processing. We talked a lot about death and dying. By the time we finished, my nephew, who had taken the death really hard, was saying to me, ‘I never knew it could be like this. I don’t feel afraid of death anymore. I want to die like this.’ If my father had just been whisked away, that would have been the end of it. Nothing would have happened to really heal our hearts.”

Singler’s husband is dying of lung cancer. The doctors predict that he has a month and a half to live. She wants him have a home funeral assisted by Lyons too, so that their grandchildren can have the same opportunity to process their grandfather’s death.

Kim Gamboa’s teenage son Kyle committed suicide five months ago by jumping off the Golden Gate Bridge. Another mother put her in contact with Boucher, and, within hours of Kyle’s death, she was at the Gamboas’ house, explaining and arranging things.

Boucher was prepared to answer the usual concerns about legality and decaying. Gamboa attended a home funeral a decade ago. At the time, she wondered how the family could stand having a dead body in the house. Once it was her own son’s funeral, however, she had no apprehensions. “When it is actually your loved one, you have such great comfort in having them home with you,” Gamboa explains. “I had wanted to do everything for him, for his soul, and then it turned out to be everything for us, and the community, to help us say goodbye.”

For three days, Gamboa and her husband kept their house open to everyone who wanted to visit Kyle. They placed his body in an open casket in their living room, surrounded by flowers and candles. Kyle’s many team jerseys hung on the walls and the pictures and letters his visitors brought crowded the fireplace mantel.

“I do not know how I could have dealt with this or the world without having all of that time to talk to him, to kiss him, to touch him,” Gamboa reflects. “Bringing everyone over provided incredible support and strength, and a sense of closure. We could all grieve and share the happy times that we had with Kyle. It gave us three more days with our son to say goodbye. I can’t even describe how much that helped.”