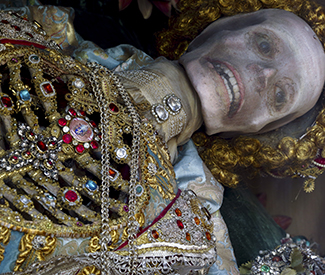 DEATH ISSUE  Death comes for all of us, sometimes with advanced warning, other times suddenly.

Loved ones get a chance to say goodbye in fewer than half of all deaths, so I was fortunate to see my 92-year-old Grandma Elinor Bonin in the week between her massive heart attack and her passing on Oct. 7. And I was doubly lucky to catch her while she was still fairly stable and lucid, before she went downhill, wracked by pain, fighting for each breath, and wishing for the relief of death.

Her health had been deteriorating for years and she was ready to die, as she told me in her room at Sierra Vista Hospital in San Luis Obispo, the same hospital where my daughter Breanna and I were each born.

Grandma was already suffering from pneumonia and congestive heart failure when she had a massive heart attack in the early morning hours of Oct. 1. The prognosis wasn’t good, so she worked with my mom and others to craft an exit plan: creating an advanced care directive with do-not-resuscitate order, setting up home hospice care paid for by Medicare, and going home to die.

“I’m ready,” she told me — sweetly if wearily, with a resolute resignation in her voice — as we waited for the ambulance that would take her home from the hospital. “I just don’t want to live in agony anymore.”

We all want to believe that we’ll show that kind of grace, clarity, and courage as we greet death. Society is beginning to wake up to the realization that extraordinary efforts to prolong life as long as possible can be as inhumane as they are costly, finally opening up a long-overdue conversation about death.

As we explore in this issue, the Bay Area is the epicenter for evolving attitudes towards the end of life, from the death midwives movement and home funerals to the complex discussions and confrontations of taboos now being triggered by the Baby Boomers facing death, both their parents’ and their own.

“The reality now is we’re kickstarting the conversation about death. We’re at the very beginning of this,” says San Franciscan Suzette Sherman, who just launched www.sevenponds.com, an information clearinghouse designed to elevate the end of life experience. “Death is a wonderful part of life, it’s a profound moment.”

We honor and celebrate death in San Francisco more than they do in most American cities. The AIDS crisis forced San Franciscans to grapple with death in once unimaginable ways. We continue to pioneer comforting passages with programs such as Hospice by the Bay and the Zen Hospice Project.

Our iconic Golden Gate Bridge has the dubious distinction of being the site of more suicides than any bridge in the world, with more than 1,200 people choosing to end their lives there, including 10 in August alone — a sad statistic considered local officials approved a suicide barrier in 2008, but they still have yet to find funding to build it.

Death Café salons that started in Europe have begun to catch on here, and from Latin America we borrowed and popularized Day of the Dead, which on Nov. 2 will fill the streets of the Mission District with thousands of people and Garfield Park with creative shrines to the dead.

“The way that we used to talk about death in the United States was as a sudden event. Now, it’s an anticipated event,” Death Café facilitator Shelly Adler told a small crowd that had assembled on Oct. 23 in the Great Room of the Zen Hospice Center. “The dying process is now thought of, not as something you can prevent, but as something you have a little control over.”

That’s what my grandmother had: a little control over her death, but not a lot. She was able to choose the place of her death, but not its time or manner, like she might have been able to do in Oregon or other places that allow the terminally ill to gather loved ones together and self-administer a lethal final cocktail.

I was able to get some final quality time with this amazing woman before she passed, watching her light up at the memory of teaching me to ride a bike, laughing at the distant thought of running alongside her wobbly five-year-old grandson. And then she laughed again when I said that I still ride my bike everywhere I go, and that I even brought it down with me in the car I borrowed from my girlfriend because I don’t own an automobile anymore.

It was the last laugh she had, my mom told me later. The next day, propped up in a rental hospital bed in her living room, was when she really began the slow, arduous descent into death. The pain and morphine sapped her spirit and fluid steadily filled her lungs, slowly drowning out the last of her life.

But longevity runs in my family, and Grandma could have hung on for days or weeks like that. Her husband, my 97-year-old Grandpa Bonin, had suffered a similarly massive heart seven years earlier, also looking for awhile like his time had come, but he fought his way back and was healthy and strong as he sat by her bedside. You just never know.

So, with pressing deadlines at work and lots of other extended family members flying in to say their goodbyes to Grandma, I said mine on Thursday evening, Sept. 26.

Four days later, I got the call from my mom, a voicemail waiting for me as I returned from yoga class. I was struck by the fact that Grandma died almost at the precise moment that I was finishing my shavasana, coming out of my corpse pose as my grandmother was permanently going into hers. It’s left to the living to ponder confluences like that and to search for meaning within the mysterious expanse of death.

That’s been the central preoccupation of religions for centuries, offering assurances to the flock that we needn’t fear death, that it’s a natural part of life, a view that has been reinforced by modern secular society as well, from atheists to ecologists.

So let’s confront death, bring it out of the hospitals and mortuaries and into the open. Let’s have the long-overdue societal conversations about it that we need to have. Let’s talk about death.

Janina Glasov contributed to this report.