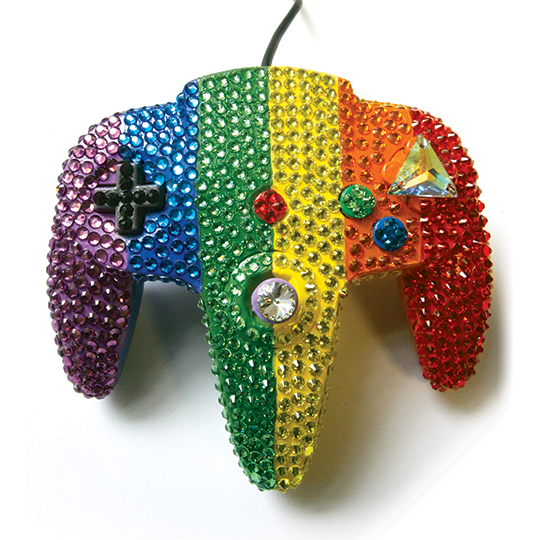 GAMER Video game heroes often fit the same bland archetype: a hetero white dude with short hair and just the right amount of manly stubble. But now some Bay Area game advocates are pushing that burly soldier with the suspiciously large gun out of his closet.

It’s time to queer up video games, but it’s not just about sexual orientation. Rebel game designers and academics in the tech industry’s backyard are starting a discussion on representation in video games, calling for more women, more people of color, and more than the usual binary gender roles.

This weekend’s Queerness in Gaming Conference, or QGCon, welcomes a collective of indie game designers, coders, and academics to Berkeley, all with one goal: to discuss and celebrate ways to make games represent the people who actually play them.

Roundtable discussions abound, like one on race in fantasy games. But there’ll be workshops too. Tired of blasting away faceless aliens? They’ll show you how to make a claymation video game oozing with charm. Sick of staring at a screen? There’ll be workshops on making traditional dice and card games, too.

The conference follows an indie game revolution that started here in the Bay Area, according to QGCon organizer Mattie Brice. “This is the time,” she says. “It’s a rising tide.”

No need to hack the GDC Vault: Lost Levels Conference is up on Youtube! http://t.co/nkWBP7FQjr via @youtube

First came Lost Levels, an “unconference” held outside the mainstream Game Developers Conference at the Moscone Center in March. Brice was there too. Much like at a campfire, participants gathered ’round and leaned in as she told tales of alternate reality games where players explore living in poverty in gentrified neighborhoods like the Mission.

GaymerX was next. The July event was the nation’s first LGBT video game convention, a space where “gaymers” could meet and form a new community.

Matt Conn, who organized GaymerX, said the Bay Area was the birthplace of the queer gaming movement because of an intersection of cultures — tech and the LGBT community. “We are a city that strives on disrupting the norm,” he said. “I think the Bay Area is the perfect place for queer geeks, especially ones who want to make an impact.”

Brice wants QGCon to elevate the discussion. “I think QGCon vaults that,” she said. “We have a lot of these workshops so non-developers can make games. Something very important to the queerness aspect is do-it-yourself development.”

And broadening the spectrum of new game developers is important, because the video game industry has historically struggled to offer stories with any real diversity in its protagonists. A 2009 study by a USC researcher took a census of video game avatars and compared them to the actual US census. Eighty-nine percent of avatars in video games were male, the study found, and most of them were white. When women are featured, they tend to be used solely as plot devices.

Anita Sarkeesian is a game blogger and critic whose site, Feminist Frequency, rallies against game clichés centering around women. In her popular series of video essays, she points out that some games, in an attempt to be edgy and mature, feature what she calls the “euthanized damsel in distress,” where in a dramatic moment the gamer (often controlling a macho male action hero) performs a mercy killing on the kidnapped damsel.

This trope shows up in multi-million dollar games like Gears of War 2, Tenchu: Shadow Assassins, the Grand Theft Auto series, and Dante’s Inferno. It is unfortunately entirely too common. “They will often beg men to perform violence on them, even saying thank you with their dying breath,” Sarkeesian says in one of her essays. In God of War, the main character’s mother thanks you for killing her.

Bonnie Ruberg, one of QGCon’s organizers, is a journalist whose articles arguing for better representation of women and queer folks in video games have incited death threats. “People feel really intense about games, and people feel attacked when you say something they love is not okay,” she says.

But she has hope that that discussion has elevated in recent years, and is confident that the discussion between academics and game designers at QGCon will be constructive. “The people making these games are very smart people,” she said.

Robert Yang is a panelist who’s flying in from New York for his “Queering Game Development” talk at QGCon. He teaches coding and game design at New York University and Parsons School of Design, where he’s seeing more women and people of color taking his classes.

“I think a lot of games would ignore he’s black, but Walking Dead confronts that,” Yang said. “He’s a black man from the south. Other characters in the game narrative are racist and discriminate [against him].” The game lets you choose how to react.

Brice agrees Walking Dead is a sign of progress for mainstream games, but that featuring a person of color as a main character is a “super, super low bar.”

Mattie Brice, game critic and designer, is one of the organizers of the Queerness in Gaming Conference. Photo by Amanda Rhoades

The indie titles in QGCon’s arcade may raise that bar just a bit. Anna Anthropy’s Triad is an allegorical puzzle game about fitting three lovers together in one bed, and Deirdra Kiai’s Dominique Pamplemousse is an adventure game featuring a singing gender-ambiguous detective.

Indie games may be light years ahead in offering more inclusive narratives, but Ruberg hopes those who come to QGCon will apply their lessons to mainstream games too — and that the conference will kick the ongoing discussion into high gear.

“For me it’s not an assumption, it’s just a fact: Sexism and homophobia are all very real things in games, in the games industry and the games community. The question is, what do we do about it?” *