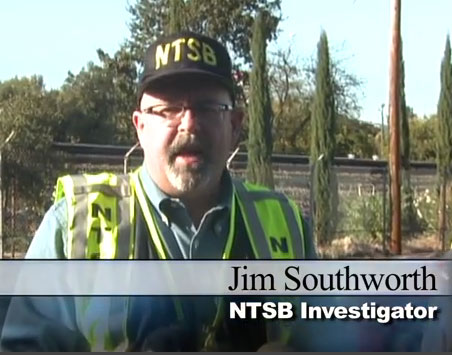 National Transportation Safety Board investigator James Southworth confirmed at a press conference on the afternoon of Oct. 21 that the train that struck two BART workers was “in operation for training and maintenance purposes,” and that the operator at the time of the fatal crash was a trainee. He said two of the six people on board were trainees.

The NTSB conducted interviews for 8-10 hours with the train operator, the operator’s supervisor and someone from the dispatch office.

Asked whether the driver had received safety certification, he said, “the training is part of the certification process.”

He said the train was going 60-70 miles per hour at the time, and there was an emergency stop. The train was driven by computer under “Automatic Train Operation” and was not in manual mode.

The district’s decision to run the trains without experienced operators would come against the safety advice of the three striking unions, one of whom — Amalgamated Transit Union Local 1555 — even filed a lawsuit earlier this month seeking to prevent BART from doing so. The case is pending, the union’s lawyers told the Guardian.

Driver of train who struck workers was in operator training. Had held other positions with BART.

“The use of uncertified training personnel to provide uncertified managers with a crash course in how to operate BART trains also presents a public safety issue,” the unions wrote in the suit.

For more on the concerns around safety training and certification for track inspection workers, read our interview with BART safety trainer Saul Almanza.