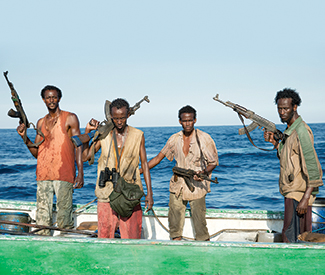 FILM Eye of the tiger, baby. The fight for survival is a dominant theme this season at the movies, with astronaut Sandra Bullock grappling for her life in Gravity; lone sailor Robert Redford piloting a leaky boat in All Is Lost; and Tom Hanks battling Somali pirates in Captain Phillips. (More on that film — directed with trademark urgency by Paul Greengrass — in a moment.)

No movie stars appear in The Summit, a documentary from Irish filmmaker Nick Ryan, but that doesn’t lessen its power. In fact, this tale of a staggeringly tragic mountaineering accident — in which 11 people perished in a 48-hour period atop K2, the second-highest peak in the world — might be the most terrifying of the bunch. Along with the expected historical context, talking heads, and some stunning aerial footage, The Summit crafts its tale using a seamless blend of re-enactments and archival footage shot during the deadly 2008 expedition. Editor Ben Stark picked up two awards at the 2013 Sundance Film Festival, and you can see why — it’s difficult at times to pick out what’s real and what’s not.

“Only 18 percent of the footage is reconstructed. I actually did the calculation, because it was coming up a lot,” Ryan explained on a recent visit to San Francisco. In this era of obsessive self-documentation, it’s not surprising that many of the climbers happened to be carrying cameras. “I was always aware, though, that perhaps once things started to go bad, there wasn’t going to be much footage there. People were going to be too busy surviving, and filming was probably the last thing on their minds. As a director, the reconstructions were a very conscious choice — I knew how complex the story was. The best method would be to tie [its fragments] together with a strong narrative structure.”

Accompanying Ryan to SF was Pemba Gyalje Sherpa, a professional climber who was a hero amid the chaos in 2008. Though K2 claimed the life of his teammate and close friend, charismatic Irishman Ger McDonnell, he didn’t hesitate when Ryan asked him to participate in the film.

“The documentary allowed us to show the public what happened on the mountain,” Sherpa explained. “But the reconstructions did bring up some difficult feelings.”

The Summit has been compared to Kevin Macdonald’s 2003 Touching the Void — a documentary enhanced by re-enactments that’s also about a controversial climb. Ryan said he saw the movie when it came out, but he’s avoided other obvious touchstones, like Jon Krakauer’s Into Thin Air, about the 1996 Mount Everest disaster. “You don’t want to be influenced. But though they’re substantially different, I was always envious of the simplicity of Touching the Void as a story. The Summit was the polar opposite of that, because of its complexity.”

The Summit also delves into the more metaphysical aspects of climbing, including “summit fever” — sharing the startling statistic that for every four people who attempt K2, one will die. “As a non-climber, I was fascinated by that,” Ryan said. “Why would anyone take worse odds than Russian roulette?”

Those who do must understand the sport’s unwritten rule of self-preservation. “Morality is skewed when you get above the [high-altitude] death zone. The morally right thing to do isn’t necessarily the actual right thing to do,” Ryan said. “If you climb these mountains, I think you have to realize that when things go wrong you can only rely on yourself. You can’t expect anyone to help you — when you’re stuck there, you might as well be stuck on the moon. Nobody is coming to help you.”

Fortunately for cargo ship captain Richard Phillips, the Gulf of Aden is neither K2 nor the moon. In 2009, Phillips was taken hostage by pirates who’d hijacked the Kenya-bound Maersk Alabama. His subsequent rescue by Navy SEALs came after a standoff that ended in the death of three pirates; a fourth, Abduwali Abdukhadir Muse, surrendered and is serving a hefty term in federal prison.

A year later, Phillips penned a book about his ordeal, and Hollywood pounced. Hanks is perfectly cast as Phillips, an everyman who runs a tight ship but displays an admirable ability to improvise under pressure.

“He was essentially trying anything to shake them off his path. [The pirates] let him hold onto his radio, and he was able to communicate with everybody else on the ship that way,” Hanks said, in town to promote the film with Greengrass and co-star Barkhad Abdi. “[Phillips] had so much knowledge as a merchant mariner. Prior in his career, he’d been in a hurricane in the middle of the Pacific, in which he was helpless — so he’d experienced a different type of terror at sea. With [the pirates], he had somebody he could interact with. It was a different type of fear and anxiety.”

Abdi, cast from an open call among Minneapolis’ large Somali community, plays pirate leader Muse. Captain Phillips focuses mostly on Hanks’ character, but it takes the time to emphasize that piracy is one of few grim career options for Somali youths. The first-time actor, who left Somalia at a young age, brings nuance to what could’ve been a one-note villain.

“I relate to that character, because that could have been me,” he said. “I was lucky enough to have parents that took me to another country, where I could be a better person. But what if my parents had been killed? I don’t excuse [Muse’s] actions, but I understand his motives.”

With a résumé full of intelligent, doc-inspired thrillers (2006’s United 93, 2007’s The Bourne Ultimatum), director Greengrass has mastered the art of fast-paced action filmmaking. He’s especially known for his use of handheld cameras, and Captain Phillips is no exception.

“Ships rock around. How do you shoot on a lifeboat and keep it steady? It’s impossible. You want the images that you’re capturing to authentically arise out of the environment that you’re shooting in,” Greengrass explained, with a caveat. “The faster-moving your sequence, and the more intensely complicated your action is, it [becomes] imperative to render detail. Detail is what gives you acceleration and focus. You’ve got to be inside the action, and your filmmaking must unlock the inner dynamics in a way that’s clear. With this film, you’ve got a very simple, unbelievably dramatic, stark story. If we render it as authentically as we can, we’ll find out what it means — which you couldn’t have found from the news, because you’re looking at it from the outside. You can only find out by being in it.” *