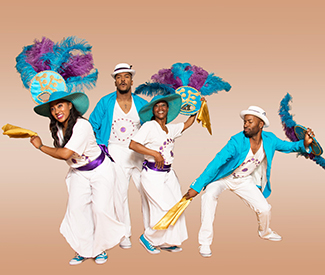 DANCE Has there ever been a celebration at Yerba Buena Center for the Arts quite as exuberant, layered, and embracing of a people, a period, and a place as Dimensions Dance Theater’s 40th anniversary show? Not as far as I know. Despite a timing hitch at the end, probably due to the exigencies of costume changes, Dimensions offered a one of a kind evening of glorious dancing. It was a long program — but then, why can’t some events keep going so that they spill deep into the night and the dreams beyond?

The three-hour show opened on a ceremonial note with thank-yous — not to deep-pocketed donors, but to the ancestors both dead and those present who have made Dimensions possible. Poet Marvin White was the griot who poured libations and repeatedly returned to reset the company’s focus on a trajectory of kindness, strength, and love, ending with a promise of a state of being in which earthly limitations will have fallen by the wayside.

Artistic director and Dimensions founder Deborah Vaughan’s vision for the program was both intimate and grand. In the first section, the dancers revisited excerpts of works in the company’s repertoire. If there is one theme that travels through Dimensions’ history, it’s dancing that embodies strength, courage, and joy. In the excerpts of Fly and Catalyst: One by One, the very diverse bodies of Dimensions’ women took to the air with silken buoyancy. Breaking out of unisons, their individuality was still carried by a common impetus. Even the trio of youngsters from the Dimensions youth program danced with that kind of personalized discipline. Young Micaiah Bell’s initial solo just about burned itself into my mind.

In the excerpt from Project Panther, Dimensions’ trio of male dancers (Erik Lee, Justin Sharlman, and Noah James III) proved themselves fierce warriors and fierce dancers in the way they dived over each other and hurled themselves through space. Lee’s exquisitely nuanced solo from Garth Fagan’s Yesterday/Yesternow made you want to see the whole work again — as was, actually, the case with many of the glances in this retrospective, which closed with spitfire ensemble takes on South African boot and can dances.

For the world premiere of Rhythms of Life: Down the Congo Line, Vaughan invited choreographers from the Republic of Congo, Cuba, and Brazil to set works drawn from their traditions on her remarkable dancers. The piece opened with the evening’s pied pipers, MJ’s Brass Boppers, who had led the initial procession into the theater. Latanya d. Tigner choreographed a witty, yet not ironic The Last Dance/St. Ann and Rampart, inspired by New Orleans funeral traditions. With the dancers in brilliant white, they shook their hands, bowed their torsos, and stepped in and out of line, making sure that they were noticed. They were mourning but also celebrating because they were not about to be overcome.

In Palo, the Cuban section, backed by strong singer Sulkary Valverde, dancers used poles as a practice of self-defense but also to demonstrate precision ensemble work. Lovely to see how Sharlman moved through the group and slowly replaced the “weapons” with hooked drumming sticks.

From Brazil, choreographer Isaura Oliveira showcased the Dimensions men in low-to-the-ground feats, that constant shift of weight and direction that we recognize from capoeira. Despite their being filled with an inherent sense of danger, these dances also mesmerize. Danilo Portugal deserved all the applause he got for his chanting and haunting birimbau playing.

I wish the lovely, sexy, and sassy couple dances — inherited from a colonial past though they were — could have been extended before leading into a skirt-swirling, intoxicating carnival. The section ended with a celebration of the end of colonialism with a lilting King (Sharlman) and Queen (Laura Elaine Ellis), and Tigner as an Elder who deposited a totemic doll on the altar.

The after-intermission Vulkana squarely threw the spotlight on the drum, without which African dance — whether in the Congo or in the Diaspora — would not exist. To have these different traditions come together proved both exhilarating and a little messy. Yet it was one of the evening’s highlights to have Kiazi Malonga in a friendly competition with tiny Congolese firecracker Hervé Makaya and his cohort Teber Milandou. They set not only the makuta drums but also costume parts flying.

Vukana also paid tribute to these brave Dimensions performers who, whether chanting in a sitting circle or swiveling their hips so that the energy rose up through the torso and sailed through the arms, looked at home. Whatever the specifics of the wide-ranging demands made on them, Dimensions looked as if born into them. *