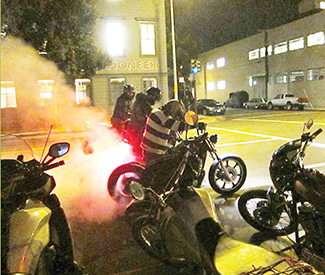 CULTURE It’s 6:35pm in Hunters Point and Poll Brown is about to be late to a documentary about himself. The puckish man from South End, Essex, and a small crew of bikers are scrambling to fix a snapped throttle cable. This is a way of life for them: always under the gun, always fixing things, always a little behind. Like a rag-tag task force, they rip a cable out of one bike and marry it to another. There’s not enough time.

At 7pm, after a hairy ride up the 101, lane-splitting between Google buses on Van Ness, Poll is inside the Opera Plaza Cinema for the premiere of Dirtbag.

“We had a bet — just between four buddies,” Brown says in the film, with his gravelly English accent. “It got to be who could build a custom motorcycle for the least money.”

And thus was born the Dirtbag Challenge, which marks its 10th year this Sunday with more rock music, BBQ, and custom motorcycles doing burnouts than is healthy for any person’s ears, lungs, cholesterol, or psyche. The rules have changed a bit since 2003, but here’s the way they currently stand: 1) build a motorcycle in one month; 2) spend less than $1,000; 3) no Harley-Davidsons; 4) the bike must complete a 60- to 100-mile ride.

The restrictions are designed to bring out the creativity and ingenuity of the builders. The first few years without the 100-mile ride rule attracted several very artistic bikes — some more sculpture than road-ready. (One year, a bike with a partially wooden frame went home in splinters.) As for the no-Harley rule, “the quintessential chopper will always be a Harley-Davidson,” explains Poll. “No matter how bad, if a Harley shows up, it still might win.”

Director Paolo Asuncion’s doc chronicles the 2009 Dirtbag Challenge. “When we started, we were going to do ‘This is about the industry’,” he says. He went so far as to interview bike-building royalty like Arlen Ness. “But by the end of filming, all those high-dollar guys didn’t really belong to the story we were trying to tell.”

Overall, the film is a fun look at a unique subculture of motorcycling. By its end, you get a sense that the Dirtbag is more than just a biker build-off — it’s an idea with a spirit behind it. Asuncion drives the point home with the final word of the film, which was met with roars of approval from the crowd: “This documentary was edited in under a month. And making this entire film cost under a thousand dollars.”

After the screening, Brown says, “I’m blown away. It’s interesting to watch something you’ve created have such a positive influence on so many people.”

Pinky McQueen, longtime organizer of the event, has one honest critique. “I realize the movie was spotlighting the builders in particular, but as far as the [Dirtbag Challenge] party goes, there are so many people who selflessly put in countless hours for free to make sure the event [goes] off without a hitch.”

A few days later, one such volunteer, Emily Wakeman, says, “The movie inspired me to just go with our skill set.” With 16 days to go until this year’s event, she and her friends have a running bike and are getting ready to mount a brake light in an old, mud-filled trombone — donated from the Great Guerneville Flood of ’86.

“We’ve spent more money on beer than we have on parts,” confesses fellow builder Shannon Jones.

In Bayview, master fabricator Turk is exactly $521 into his Yamaha-powered, side-car equipped dragster bike. He enjoys the educational side of the Dirtbag Challenge. “It shows that if you want to build a motorcycle, you can,” he says. “If you don’t know how, you can get help.”

Jason Pate is working against the clock in Fremont. Having spent around $800, he has a running bike constructed from no less than six different motorcycles. His son, Jason Pate II, says Brown was here yesterday and showed him how to clean out carburetors. Meanwhile, San Jose resident Alex “Koska” Verbisky — originally from Moldova — is at exactly $1,000. His 1969 Honda CB450 has a wacky new set of handlebars made from Suzuki shock parts and a Volkswagen camshaft.

Up in Orland, Casey Anderson, a professional chopper builder featured in the film, is about $580 into his build, converting a 1979 Honda touring bike to look like a 1928 BMW R62. Thirty minutes south through walnut and olive orchards, in Willows, Kyle Cannon’s son Michael is building a bike for credit in shop class with his pals Joseph and Jake Martin. And down the road, Josh Stine is overcoming his muscular dystrophy, building a bike he hopes he will sell to supplement his Social Security check.

It’s inspiring — a quality that’s fitting for a volunteer-run event that promotes creativity, self-expression, and self-reliance, and encourages learning and community. Participants build strange, mutant vehicles. And it all started as a small gathering of friends near the waters of San Francisco. Sound like any other event you know?

Of course, that doesn’t mean he likes it. The biggest difference between the Burn and the Dirtbag is that there’s simply no way to throw money at the Dirtbag. Ten years in, the event is still free and no one is getting paid. Brown even recently sold his van to finance a cross-country motorcycle trip.

“If I did want to make this a money-making enterprise, the potential is there,” says Brown toward the end of the film. “[But] I’m not sure if I’m ever gonna actually do that, because that might remove the soul from it.” *