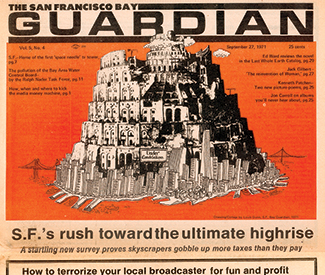 EDITORIAL The last couple years have been some of the most difficult and precarious in the Guardian’s 47 years of printing the news and raising hell in San Francisco. We’ve been struggling to survive and thrive, both the newspaper and the larger progressive political and alternative arts communities the Guardian is a part of, at a moment when this city needs us more than ever.

But the good news is that people are awakening to what has been lost as our resources have waned. We see it in the resurgent movements against evictions and gentrification and for better transit and bike lanes, in a rare referendum campaign challenging the 8 Washington project and its lies, in the lively online discussions we facilitate, and in the community support that the Guardian and other nascent progressive media projects are receiving.

Most people don’t trust the mainstream political, economic, and media institutions to understand or explain what’s happening to San Francisco and the greater Bay Area. Technology has created an explosion of new media outlets, but it’s come at the price of common narratives and gathering places where we can join together, discuss the issues, and then assert our collective will.

This is where the Guardian comes in, and it’s why we must find the way to grow through these tough years and regain our standing as the premier forum for discussing and promoting San Francisco’s values and needs. And for that, we need your help and support.

In some ways, it’s a situation similar to when Bruce B. Brugmann and Jean Dibble started the Bay Guardian in October 1966, when San Francisco was at the epicenter of social movements and technological innovation that were challenging entrenched economic interests and the inertia of the status quo.

The Guardian gave voice to new ideas about human rights and responsibilities, sexuality and identity, art and expression, diversity and tolerance, and many of the other issues and values that have animated San Francisco for the last half-century. Along with papers such as the Village Voice, Boston Phoenix, and Chicago Reader, the Guardian helped create the model for alternative newsweeklies that came to proliferate in every major US city, expanding the political and cultural dialogue in the country.

But that model is faltering. The Phoenix, which was founded the same year as the Guardian, closed its doors earlier this year, falling victim to the same economic pressures that are plaguing the entire newspaper industry. And the Voice soldiers on as a relatively apolitical corporate clone of its former feisty self after being bought out by a Phoenix-based chain driven by the kind of bottom-line Wall Street values that alt-weeklies were originally launched to oppose.

Regular readers of the Guardian know how we’ve fought for our independence and sustainability over the last year (see “On Guard,” June 19, and “New Guardian leadership wants your input,” July 23), and that we’ve approached it in a way that was consistent with our values on transparency, fearless truth-telling, and partnership with our progressive community.

And now, on the Guardian’s anniversary, we are recommitting to the mission stated on our masthead, “to print the news and raise hell,” while updating that mission for the digital age in myriad ways, some of which we’ll be announcing soon. This region is at a crossroads, choosing between greedy, myopic elitism and egalitarian sustainability, and we need strong media voices like the Guardian to clarify that choice.

For that, we need your help. Read the paper and then pass it to a friend. Post our stories to your favorite online forum. Buy an ad to promote your business, event, or cause. Participate in our community forums, including our Oct. 23 discussion of high-rises and waterfront development at the LGBT Center. Send us good story tips. And, most importantly, help us promote the idea that an informed and engaged citizenry is the foundation of democracy — and the only way to save the soul of San Francisco.