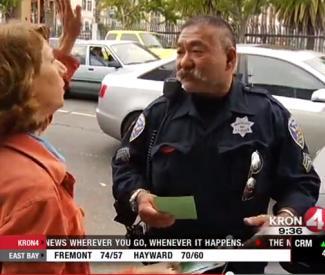 The cyclists of San Francisco were angry. Sup. Jane Kim was skeptical. Sup. Scott Wiener was unconvinced. Sup. Eric Mar said bikers were “pissed.” Deputy Chief of Police Mike Biel said he was too, but his anger could have just as easily been attributed to the 35 minutes he spent at the stand, acting as a whipping post for frustrations with the SFPD, as it could be to the department’s mistreatment of San Francisco cyclists.

Either way, the cyclists ruled the day.

During Thursday’s (10/3) Board of Supervisors Neighborhood Services and Safety Committee, Sup. David Campos called for a joint Board of Supervisors-Police Commission hearing regarding SFPD investigation protocol for bike accidents, but no immediate timetable has been set for the matter.

Without Police Chief Greg Suhr in attendance — his chiefly presence was required “reading to the children,” as Biel noted multiple times — Biel was left to stand solo in front of both frustrated supervisors and an incensed public.

To which Biel responded, “I’d like to see more.”

In fact, there was little defense on the part of Biel — and by extension, the Police Department — when it came to the seemingly lax (at best, malicious at worst) approach the SFPD has taken toward bike accidents in the past four years.

He even echoed Mar’s “pissed” comment, saying, “I was pissed too,” in regards to both what Mar called the “supposed investigation” of the Aug. 14 death of 24-year-old Amelie Le Moullac and the flippant attitude some in the department had taken towards cyclists in the days and weeks following. But he also stated that he didn’t think there was a negative bias in the SFPD.

The board’s decision to continue the conversation was bolstered by nearly 40 often-horrific testimonials regarding police treatment of cyclists in the City. And nearly all the stories could make the average person cring with the frustration, anger, and outrage they had the power to illicit.

Leah Shahum, executive director for the San Francisco Bike Coalition, told a story of a woman who was unable to make it to the hearing due to the injuries sustained in an April accident.

The woman, whom she didn’t identify, was biking in Golden Gate Park with her husband and son — the son was on the back of the woman’s bike — when she was hit from behind by a car, while she was stopped in the designated bike lane.

Witnesses stated that the driver was at fault. Her husband said the same thing. The police insisted on questioning the two of them more about their helmet usage — “which they were wearing,” according to Shahum — than they did about the actual events of the accident. Incidentally, adults aren’t required to wear bike helmets in California.

Robin Levitt, a Hayes Valley resident, talked about the strange “culture of blaming the victim” that has seemingly been propagated in the City, and how “in Germany, it’s immediately assumed that the vehicle is at fault, so drivers are safer.”

(And for what it’s worth, when Biel denied that same sentiment’s existence earlier with the committee, supervisors didn’t seem too convinced either. Mar even asked Biel, “Is there a bias or blame-the-victim attitude in the San Francisco Police Department?” which Biel promptly denied.)

And then there was Edward Hasbrouk, a former professional cyclist who has “never owned a motor vehicle.” He was biking home from work one evening when his progress in a Valencia Street bike line was impeded by a double-parked car in line for a valet service.

(Wiener has called for increased police enforcement of laws against double-parking. During today’s (Tues/8) Board of Supervisors meeting, he asked Mayor Ed Lee to support the effort, noting that SFPD rarely issues tickets to double-parkers despite “its impacts on traffic, Muni, cycling, and pedestrians.”)

Hasbrouk said that after a somewhat heated back-and-forth between the valet drivers, he flagged down a police officer to help him resolve the dispute, but the officer instead made Hasbrouk “carry [his] bicycle to the sidewalk.” Hasbrouk then said, “What would I have to do to get you to ticket these cars double-parked?” That comment got him arrested for felony vandalism, according to Hasbrouk. Expunging the arrest cost him nearly $3,000 and a night in jail.

But given the SFPD’s lack of pragmatism when it comes to investigating these accidents (for instance, Biel said SFPD doesn’t require a continuing education for officers assigned to traffic enforcement, despite what Shahum says are complex issues surrounding a rapidly growing population of cyclists), and it’s boorish behavior following the Le Moullac tragedy in August, it’s high time for change.

And a joint hearing could be just the place to start.