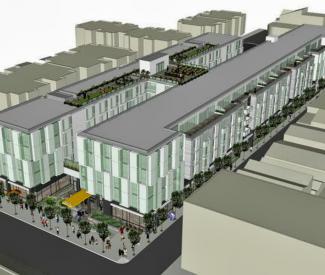 The San Francisco Planning Commission yesterday approved a plan to build a mixed-use five-story building on the hotly debated 555 Fulton St. property. The plan includes a grocery store measuring 32,400 square feet in addition to 139 apartments and townhouses that would be built above and around the designated shopping area.

It wasn’t a unanimous vote, but the Western Addition is inching toward the affordable grocery store that many in the neighborhood says it desperately needs. The 4-2 vote to exempt the project from the area’s formula retail ban — Commissioners Kathrin Moore and Hisashi Sugaya voted for a continuation instead — was reached after nearly two and a half hours of deliberation, presentations, and local testimonials.

The commission’s decision moves on to the Board of Supervisors, where the discussion of affordable food and whether that can only be provided by a national supermarket chain will likely continue.

In May of 2010, the Planning Commission approved a similar project to the one currently proposed: The then-developers had secured a Special Use District (SUD) called the Fulton Grocery Store SUD back in 2008 —a distinction which lifted the restriction on large-footprint retail outlets in the Hayes-Gough Neighborhood Commercial Transit District — as well as a Conditional Use Agreement (CUA) that lifted the ban on “formula retail outlets” only for the proposed tenant of the specific unit.

But the developers could finance the project and its entitlements expired on April 3, 2013. Renewing the SUD and CUA were key to yesterday’s discussion. Without the SUD, the neighborhood’s current zoning policy would state that the grocery store’s footprint alone would be too large to permit. But with the SUD, the developer is not just obliged but rather forced to seek a tenant that will build a grocery store “larger than 15,000 square feet.” That means that the outlet would finally be the full-service grocery store the neighborhood has called for.

The HVNA/HVMA want to uphold the Hayes-Gough NCT’s outright ban on formula retail that’s been in effect since 2004, a move that would effectively force the developer into trying to find an independently owned suitor for the 32,400 square foot space, claiming that “independent” and “affordable” aren’t mutually exclusive.

The residents of the Western Addition want a store that falls under the “formula retail” umbrella, citing fair hiring practices and affordability of goods often found at those outlets among other reasons for the preference.

According to developer representative Jessica Zhou, however, of the City’s 31 independent grocery stores, just two measured over 15,000 square feet (the minimum size allowed in the SUD), and of those two, exactly zero had expressed interest in the location.

On the other hand, according to Zhou, a tidy list of “formula” stores have expressed interest in the site, among them Grocery Outlet and The Nugget, which means that the HVNA/HVMA are now holding out for something that isn’t even on a theoretical horizon.

Commissioner Richard Hillis agreed, and he even joked about his own troubles with the affordability at independent grocery stores, a joke that Zhou’s statistics supported, citing a study that found the average shopper in California saves 35 percent more money when shopping at a formula retail grocery outlet over of an independent one.

The public support might have been strong, but the project hasn’t been approved yet. Even with the support of the Planning Commission, the Western Addition neighborhood and the developers, nothing can happen until the Board of Supervisors approves the same plan, and that means that both sides have time.

“We believe that this project will help two-fold: One, economically [by providing] jobs and opportunities for our young residents — individuals from the neighborhood — but also, it will provide access for our seniors to have the opportunity to walk to the store and get out of their homes and be able to be a part of the community,” said Gary Banks, a Fillmore resident.

Or as Dirk Butler said, ” The reality is an affordable grocery store is the best fit for our community. We have seniors, low-income immigrants that are within a half a mile of a grocery store that they have to trek in order to buy groceries for their family. This is a good move.”